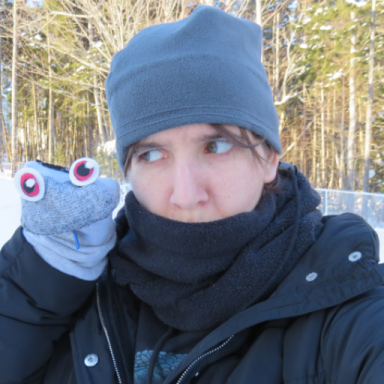 Did you know that you go blind for an average of 40 minutes a day? I’m not talking about when you close your eyes to sleep or when you blink. It happens for a millisecond whenever your eyeballs move: your brain stops registering visual data to prevent you from seeing the world as a blurry mess. It happens so quickly that it’s impossible for you to perceive the lapse, just like when you look at a frame-by-frame animation. Everything seems like one fluid image, but the truth is, you’re seeing snapshots. They call it saccadic masking. Your eyes capture data, but your mind discards portions of it for a more stable viewing experience. The fact of the matter is that your brain lies to you on a regular basis, and only shows you what it wants you to see. If your brain can “ignore” what your eyes see, then you have to ask yourself what else it might be keeping from you. I found out the horrifying truth when I went in for my laser eye surgery.

I’ve had to wear glasses since I was in grade school, back when calling someone “four-eyes” was the cool thing to do. I got teased a lot, especially after my lenses got so thick that my eyes seemed huge to anyone looking. Most kids could get away with only wearing their glasses when their parents were around. They’d remove them as soon as the authority figures were out of sight, so they wouldn’t get teased. I couldn’t, because I was drastically near-sighted, and needed my glasses to function. It wasn’t until my later years in high school I started wearing contact lenses. I was a little squeamish at first, because shoving one’s finger in one’s eye isn’t exactly a pleasant experience. That said, it was better than constantly having to adjust and clean my glasses. I used to go through a bottle of spray per week. In the winter, it was practically impossible to walk around outside, what with the fog build-up. Contact lenses made everything better.

For a while, the lenses were enough, and I enjoyed the freedom they offered me. I can’t tell you how depressed I was the day my optometrist told me that I’d undoubtedly need to get glasses within the next two years to keep up with my degenerative myopia. They didn’t make contact lenses strong enough for me. This was around the time that laser eye surgery was starting to take off, but it was so expensive that I didn’t even consider getting it done. Before long, I was wearing a combination of glasses and contact lenses just so I could function.

Years passed, and laser eye surgery became more popular, effective, and less expensive. I graduated college, got a full-time job at the government, and eventually earned insurance coverage. My annual eye exam being weeks away, I decided to take a look at my insurance plan. I knew I was going to need a new pair of glasses, since things were getting blurry again, so I wanted to know how much I’d have to spend out of pocket. Lo and behold, I spotted a clause stating 70% of laser eye surgery fees were covered. I was floored, and immediately set up an appointment at a local clinic. One thing led to another, and I got booked for surgery.

The set-up for the procedure itself terrified me beyond words. I was in a dark room, strapped down to a chair while an ominous machine hung over my head, quietly humming as though heralding my doom. My eyelids were forced open using medical tape, as though I were in a dystopian sci-fi mind-control chamber. I’m not going to lie: a big part of me wanted to run away screaming…but then, I’d have to pay the 50$ cancellation fee, and that just wasn’t happening.

The eye surgeon squeezed a few numbing droplets into my eyes. The prickling sensation made me want to blink away the liquid, but the tape kept my eyelids in place despite my efforts. Whoever decided the procedure needed to be done while conscious must have had quite the sadistic streak. I felt my throat tightening as a scalpel approached my right eye. The surgeon’s hand had just the slightest tremor, and I could picture him turning my eye into a shish kabob. I wanted to run and scream and crawl back into my mother’s womb. No more glasses, no more glasses, no more glasses… I repeated to myself, hoping the mantra would give me enough courage to see things through. My instincts were telling me to close my eyes and look away, yet it was physically impossible to do so. I had to watch as the sharp knife carefully touched the surface of my eyeball. The surgeon sliced a flap of my cornea and delicately folded it over. As he did so, half of my field of vision went dark. The first eye was bad enough, but the procedure was all the more terrifying when the surgeon started on my left eye, because I knew what was coming. The pain wasn’t nearly as bad as the anxiety building in me as the scalpel neared me once again. Another quick cut, and I was effectively blind.

At first, all I could see was darkness and morphing grey shapes like when you close your eyes. But then, a small red dot emerged in the distance. The surgeon said it was the laser, and told me to focus on it. I locked my warped gaze onto the light, but when something appeared in my peripheral vision, I found it hard to keep from straying. I shouldn’t have been able to see anything but that red light, yet a shape swirled around just out of sight. When I mentioned it to the surgeon, he dismissed it as my brain playing tricks on me. While the laser did its thing, I continued to see an outline in the corner of the room. It couldn’t have been the surgeon, since he was busy operating the laser. Once the procedure was done, I was told to keep my eyes closed for the rest of the day, and sent home to recover.

The next day, I woke up and saw the world in a completely new light. It was like upgrading from a black and white TV to a high-end HD flatscreen. For the first time in my life, I could see clearly with my own two eyes. I could see the tiny rocks on the ceiling, the grain on my wooden cabinet, the pores on my skin, the sagging old man hovering in the corner, the flowers in the hall, the – HOLY SHIT! There was an old man hovering in the corner of my room. He bobbed up and down, looking at me absent-mindedly and grinning in a creepily perverse manner. His flat yellow fork-like teeth protruded from his mouth as his three beady eyes looked me over, sparkling like demonic stars in the sky. I knew that I’d seen him before. Part of me knew that I’d been seeing him my entire life. My brain pretended he wasn’t there, but my eyes saw him nonetheless.

As I backed out of the room, the monstrous man clapped his bony hands together in amusement, following me into the hall. The memory of a reoccurring childhood nightmare came flooding into my mind: I was in the woods, running away from the three-eyed man. Whenever he was about to catch me, I’d always make it out of the forest just in time to escape, only to find the ground cave beneath me give, sending me falling down a ravine. I’d wake up screaming for my parents, who comforted me and told me it was just a bad dream. Yet there I was, face to face with my own personal boogieman. Though in my memories, he was always frowning, the cruel smile plastered on his face made me realize that he knew I could see him now. He knew he could chase me, just like in my nightmares.

I ran. I ran out of my home and into the street, still in my pajamas. The sunlight stung my sensitive eyes, but the pain was nothing compared to the fear I felt. I didn’t even have time to take in the undoubtedly gorgeous view, because something else caught my eye.

They were everywhere. Boogiemen, monsters, ghosts…whatever you want to call them. Your brain wants to protect you from the truth, but the visual data is stored in your mind. The images come out when you sleep, because that’s when your brain loses control and can no longer restrain the memories. Sometimes, when the conditions are justright, people can catch passing glimpses of them, like a glitch in a video game. In reality, they’re always around. You can’t run from them. Believe me, I’ve tried. If you see them, act as though you can’t. They enjoy the chase. Don’t give them the satisfaction. Your rational brain will lie to you, but your instincts won’t. Trust your gut: if you feel like you’re being watched, it’s because you are.

It took the three-eyed man less than two days to catch me. In that time, I saw more nightmarish creatures than you could possibly imagine. I saw headless men, horrid hags, elongated people, and most frightening of all, creatures that looked identical to my loved ones. They stood motionless a few meters away from me, heads down as they continuously whispered my name. I saw the world for what it was, and it terrified me. In a way, what the three-eyed man did when he caught me was almost a relief. At least I’ll never have to look at those horrific creatures again. And, hey, I’ll never need glasses or contact lenses ever again.