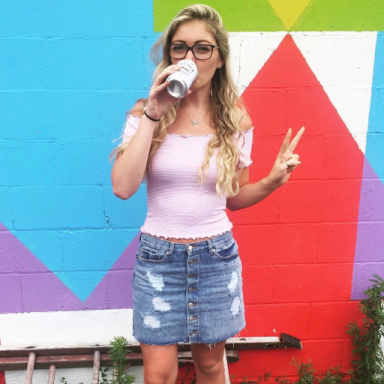 Studying to become a writer, I was pretty much bred to avoid clichés. But, despite my professors’ tireless efforts to engrave this doctrine into my mind, I still can’t seem to shake the thought that everything, does in fact, happen for a reason.

Truth be told, I consider myself to be a firm believer in this statement—an advocate, even.

But, I’ve noticed that any time I have used this tired credo as a means of reassurance to friends who’ve found themselves in less-than-favorable situations, I am usually faced with a “you have to say that, you’re my friend,” or worse yet, “I don’t buy into that because everyone is in charge of their own fates.”

Well, excuse my not-so-subtle eye-roll to all of you go-getters who are trying to desperately carve out your future, but allow the realist in me to burst your bubble when I tell you that you cannot plan your future.

I’ve touched this subject before; the whole idea that life may— ahem, is* going to throw you curveballs—and believe me when I tell you I am no athlete. However, I feel confident in saying that I have mastered the art of overcoming the adversities my life has pelted at me with little to no athletic abilities. And if you’re wondering what my secret is, it’s that I know that everything happens for a reason.

I do want to make the disclaimer that if something shitty happens to me, I don’t just immediately shrug my shoulders and say, “Eh, everything happens for a reason, am I right?” I think that people who use it in that sense use it as a cop-out of sorts.

I find that I don’t say “everything happens for a reason,” until I am able to reflect on past events in my life and am truly able to understand why certain things played out the way that they did—until I can understand what the ‘reason’ really is.

So to anyone who doesn’t buy into this cliché, well of course you wouldn’t. Because you cannot understand why your life has brought you to where you are if you haven’t found out what the reason is yet.

Take me for example. A little over a year ago, I found myself in a situation that I wanted no part of. I was pissed, confused and admittedly, a little scared. Something that was completely out of my control was about to remodel my life. A few heated conversations, cuss words and hasty decisions later, I was finally able to see the reason behind what was happening in my life.

I was angry at life for throwing a wrench in my plans because I (at the time) saw no benefit from what was about to happen. One year later, it ended up being the best thing that happened to not only me, but my entire family. A situation that initially was tearing my family apart ended up bringing all of us even closer.

It’s like that quote that people are constantly misattributing to Marilyn Monroe: “Things fall apart so better things can fall together.” Damn—did I just throw another cliché in here?

I’m not going to lie, it can take a good chunk of time for these ‘reasons,’ to arise. But when they do, it makes certain situations, problems and life adversities seem so clear.

And from past experience, I understand that it’s difficult to see in the moment, but maybe every breakup, every relapse, and every misstep that has happened or is happening to you really is happening for a reason—to lead you to something even better.