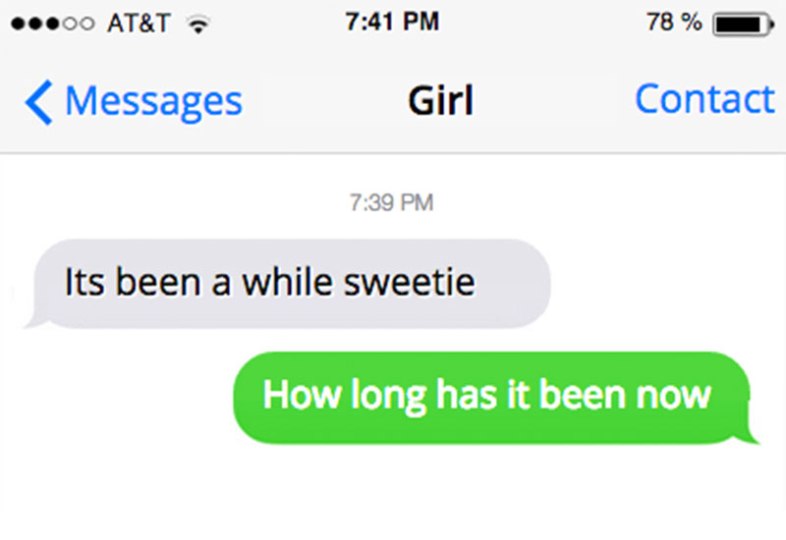 I’m a little ashamed to admit it, but I probably acted out of desperation the first time it happened. I had gotten texts from people with the wrong number in the past and never thought twice about telling them so and moving on with my life. But this time was different, because this time I was lonely.

A five year relationship is a hard thing to just walk away from, especially when you have to move into a little one bedroom by yourself. The place just felt really empty. So when I got a text from a number I didn’t recognize, I jumped at the opportunity to make a little conversation. It helped that I had imagined the stranger to be a girl. At that moment, I sincerely thought that maybe I could wind up turning a chance mistake into something more. I just didn’t realize how much more I was going to get.

Meaningless at first, I unraveled a hundred different back stories to those words. Sweetie is something women typically say to men, although it’s not unheard of to hear a guy calling a girl that. I wondered what it was these two people did last time that was so long ago. Why have they not talked since then? After grasping at every possibility in the context and back-story, I made up my mind to just dive in and feel my way through the reality. I added the number in my contacts simply as, “Girl.”

Me: How long has it been now

Girl: Since what?
Since you burned down the Harrison barn or since you threatened to kill me and left for good?

Great, whoever she thinks I’m a real piece of shit. At least she is used to that kind of guy. That should help after I reveal to her that I am a complete stranger who has been tricking her into thinking I’m the man she tried to reach out to. The one thing I had trouble understanding was the whole barn burning thing. My area code is definitely 928, but I can’t think of anywhere a barn would be. All of the old farmland has been commercialized.

At 26-years-old, Luke still bites his nails and sucks at making eye contact, but he does have a 17 pound cat named ...