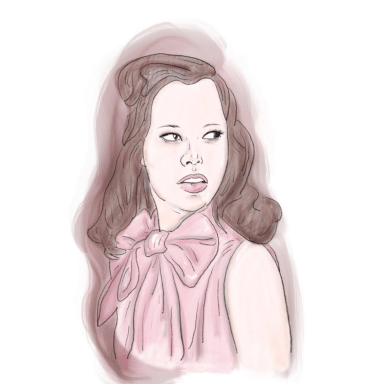 There was a man who sat down next to me on the bus and asked me if I’d ever had a scary dream. It was obviously very creepy and I was also furious that he’d made me take off my airpods so he could ask. I thought he was going to ask me when a stop was, but I should have just pretended I didn’t notice him motioning at me.

The man was old and tired looking. He smelled like whiskey and marijuana and body odor, which is to say he fit right in with most of the people I met on the bus. I was just trying to get downtown so that I could stand at a makeup counter all day and make fourteen dollars an hour.

“Have you had any scary dreams lately?”

The man looked at me and smiled and I saw that his teeth were dark gray in the crevices and that parts of his gums were blackened. I thought about how miserable it must be to grow old and about what excuse I could make to get out of this conversation without pissing him off and making him go crazy. Nothing surprised me about bus people anymore.

It was a lie, but I said it in a flippant kind of way and made a show of putting my airpods back in and hoped it would be enough to get him to stop talking to me.

“Have you dreamt about the black dog yet?”

I recoiled in disgust. Even for a dirty bus man, this guy was creepy. At the next stop I got off the bus two stops early. I didn’t mind walking if I was going to save myself from him.

I walked quickly along the hot summer street worrying if I was going to get sweaty on my way to work. I stopped for a coffee I shouldn’t buy, but it’s so hard not to when you’re staring down the barrel of an all day shift. I didn’t recognize the guy behind the counter but he acted like he recognized me. He didn’t ask for my name before scribbling something down on the cup. I got a large iced americano and honestly expected to find his number when I walked away so I wasn’t surprised to find the indecipherable writing longer than I expected. By the time I unscrambled the message HAVE YOU EVER DREAMED ABOUT THE BLACK DOG? I was already out of the shop.

I didn’t want to go back in and demand answers but this was the point where I started to freak out.

I didn’t know anything about a black dog. Truthfully I don’t think I’ve ever had a dream about one even though my family had a black lab growing up. I like dogs and the concept of dreaming about one wasn’t frightening in itself, but the circumstances of being told about one twice in one morning by gross strangers definitely was. Maybe it’s some incel thing on the internet? I wouldn’t give anyone the satisfaction of reacting to them, but I decided I would definitely search for “black dog urban dictionary” as soon as I clock into work.

I got more black dog messages at work that day. Someone wrote it on one of the counter mirrors in lipstick. Have you ever dreamed about the black dog yet? It was during the lunch rush so I didn’t see it until I was wiping down the counters later in the afternoon. Urban Dictionary wasn’t helpful either, and if it was some sort of internet joke they were doing a good job of hiding that from the searchable internet.

Another customer straight up asked me as I was ringing her up. I didn’t like her from the moment I started talking to her. She had a dead look like she’d washed up out of the ocean once and just got up and kept living her life. I wasn’t going to take her seriously no matter what she said. But that made four people. I was freaked out.

I went home and locked my doors and even went around checking the windows to make sure everything was locked and I was (safely) home alone. I turned on Netflix while I made dinner and had an uneventful few hours eating and vegging out before dragging myself up to bed. It had been a weird day and I was afraid of the black dog dream. I didn’t know what it was but it didn’t sound good.

I actually slept great. Better than I can ever remember sleeping. I woke up Saturday feeling well rested and clear headed. I was instantly relieved to blink my eyes open and remember that nothing ominous happened. In fact, I hadn’t dreamed at all. I slept as soon as my head hit the pillow and I was out cold the whole night.

By the way, have you ever dreamed about the black dog?

Not to sound creepy, but have you?

It’s really not so bad. You have so many dreams. You can spare one. I promise you won’t even miss it.