It’s easy to post something convincing on social media.

I mean, you could lie about where you are and what you’re doing, but if someone stalks enough, they can figure out the truth themselves.

‘You’ on Netflix puts social media and relationships under a whole new light. It shows the unsettling reality of a stalker/murderer and their victims, all the while proving the difference between obsessing over someone and really, genuinely loving them.

1. The first time Joe stalks Beck on social media only a few hours after meeting each other for the first time earlier that day. 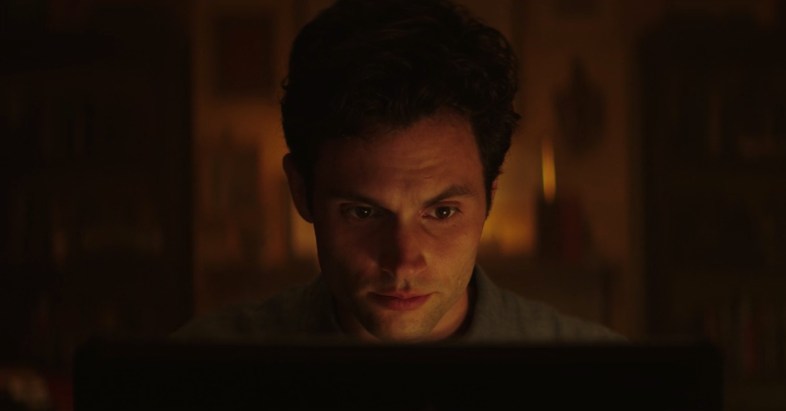 Only a few hours after meeting, he finds her on social media: Facebook, Twitter, Instagram. He sees how much she puts online but how it’s merely a collage of what she does and what she likes, rather than it being who she really is.

He also notices how she doesn’t mention anything about him online. To him, that meant they “really connected” in real life because what she doesn’t post online is the real stuff.

To think that there are actually people out there who think like this…She didn’t tweet about meeting some random hot dude in a bookstore? That’s okay. That just means I meant something more to her than just a tweet.

2. Joe stalks Beck again, but this time, to find more information on the guy she’s having sex with. And yes, Joe knows this because he’s standing and watching them outside her window.

We, along with Joe, are beginning to learn about Benji. Joe looks through his Facebook and learns enough about him and his family and what he does for a living and is able to make judgements solely off of that. According to Joe, Benji tries to hide his privilege with “BLACK LIVES MATTER” tweets.

3. Joe manages to get inside Beck’s apartment while she’s not home. And yeah, he finds her laptop and yeah, he goes through her things. Creepy.

Thanks to Google Maps and nearly everything Beck has shared about herself online, Joe now knows where she lives. So while she’s out of her apartment and some guy is doing maintenance with the front door open, and Joe is able to slither his way inside, pretending to be her boyfriend who lives there.

When he’s inside, he rummages through her belongings and feels the need to go through her laptop. He spends a lot of time going through her Facebook and iMessage (as if he doesn’t already have access to it anyway…) and is able to see what she’s been saying to people.

You’re a dummy if you don’t password protect your devices. I mean, seriously. If you leave your unlocked laptop or unlocked phone somewhere (even if it is inside your apartment!), someone can get access to every bit of information you have on there.

4. So we have Benji being held hostage in the basement of the bookstore. We have Joe tweeting from Benji’s phone to avoid any suspicions. And we have Beck worrying about Benji’s whereabouts and not suspecting a thing. Wild. 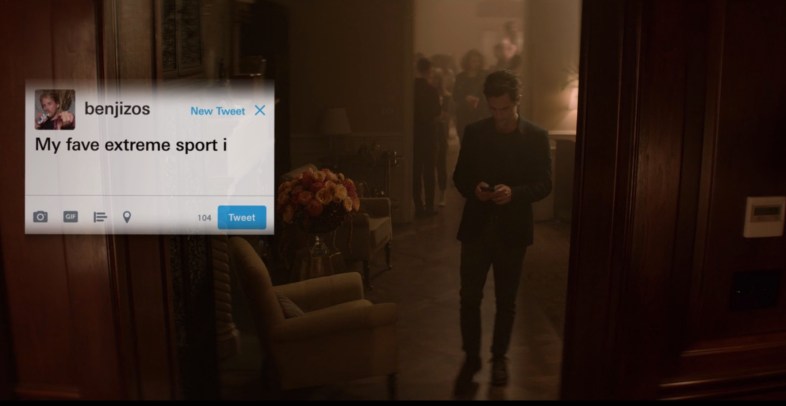 Just as Joe learns about Benji and who he is with Beck, we learn how much Joe hates Benji and how far he’ll go to get him out of the picture. While Joe’s keeping Benji hostage in the basement of the bookstore, he’s also updating Benji’s social media accounts to make it less suspicious and more like Benji just went on a trip somewhere.

This has probably has happened before in real life.

Yeah, people hack into accounts and post tweets and photos all the time. But the fact that someone is holding another person hostage and tweeting from their phone to make sure no one suspects anything weird? Okay… 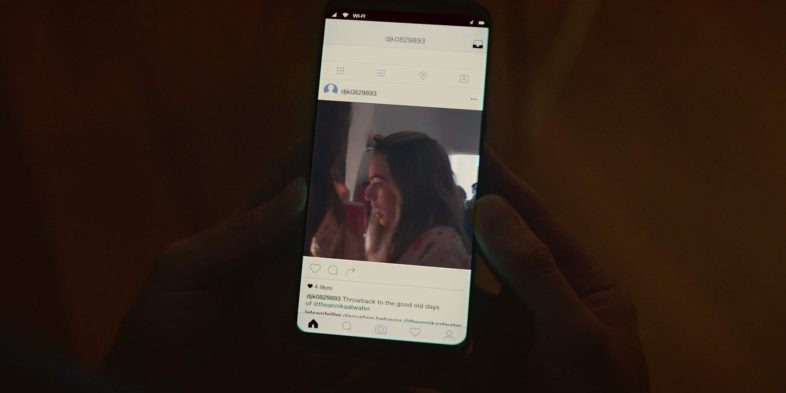 Joe stalks Beck’s friend Annika on Facebook and finds a very old and very embarrassing photo of Annika and Peach. He influences Annika into posting it on Instagram as a cute throwback pic and obviously she does it. Peach sees it and instead of confronting Annika and asking her to take it down, she gets a little bit of revenge: she posts an old, probably super private video of drunk Annika being racist.

And of course Joe is in the middle of this. I mean…he started it!

But seriously, revenge posts are the worst. Don’t do it. Ever. People do it all the time and it’s just ugly, so don’t be like those people.

6. Joe keeps up with Beck on social media, even after their breakup. 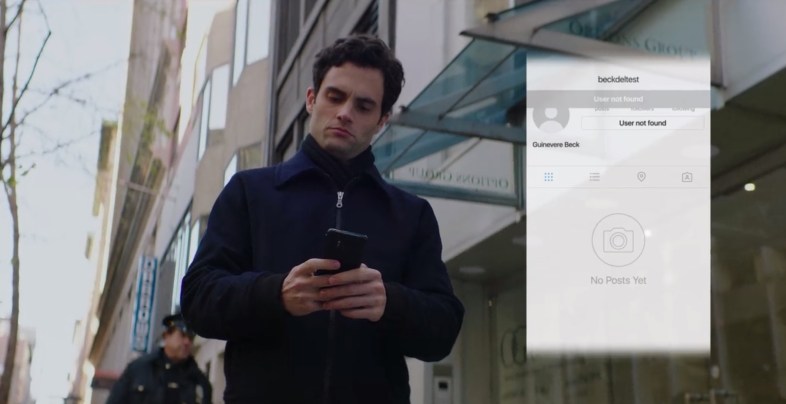 Joe tries to distance himself from Beck after their breakup. Checking up on her social media accounts less and less. Not reading her emails or texts as frequently as he used to.

When he notices that she deleted her social media accounts (Facebook, Instagram, Twitter), he panics. It was a comfort to him, knowing he could see what she was doing and where she was going at all times. But now that she’s off the grid? He doesn’t know what to do. He wonders how he can let go of her when she’s actually gone.

It’s scary to think that there might be someone out there who keeps up with your posts on social media. I mean, if you were to delete your social media accounts, someone would be genuinely upset about it. This happens with celebrities and their fans all the time. But ~normal~ people? Yikes.

7. Beck does a little bit of stalking herself. Oh how the tables have turned. 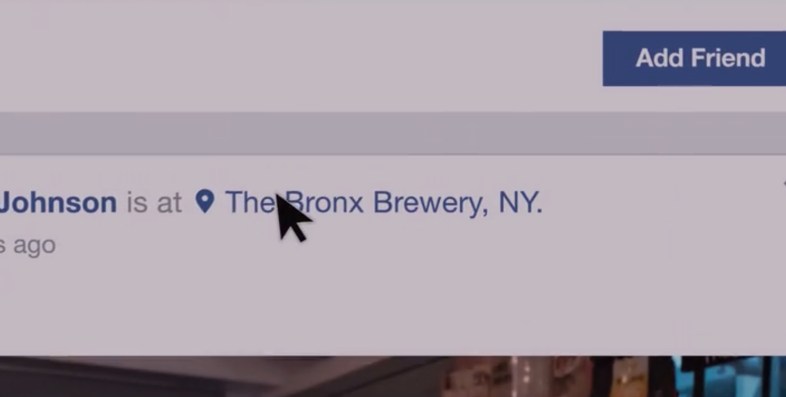 Beck finds out about Candace, Joe’s ex, and thinks there’s something a little weird with her and her disappearance. She stalks Candace on Instagram, finds a tagged photo of her friend Maddie and where Maddie works. She goes to her work, asks questions about Candace, and starts to gather enough information to think that maybe Joe is actually kinda sus.

Here’s an obvious statement: if you post something on social media with a location of where the photo was taken, anyone looking at the post will click on the location, stalk you, and go through the profiles of anyone else tagged. That’s just what social media has become, or, maybe it’s just always been like that.

8. Beck is being held hostage in the bookstore basement and Joe tweeting and texting on her behalf to keep from suspicions. Ugh. 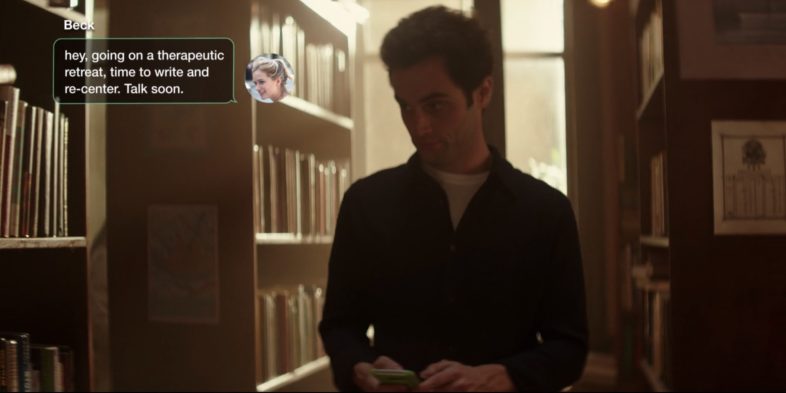 Beck finds out that Joe has been stalking her and she freaks. To save himself, he hides her away in the basement of the bookstore so she can’t tell anyone anything.

With her phone, he updates the world that she’s going off the grid to focus on her writing. He texts her friends, he uploads a photo on Instagram, and tweets about her break.

He believes that it’s not a real social media detox if you don’t announce it to the world first and to be fair, he’s not wrong. Isn’t that scary?

Is Emotional Cheating Worse Than A Physical Affair?

The Scary Reality Of Netflix’s ‘You’, Stalking, And What You Post On Social Media

How To Find Love More Easily Based On Your Personality Type

How Social Media Is Ruining Your Relationship Before It Even Starts