“So what are you looking for?

I’m looking for a relationship. That’s what I want.

I want to not feel so vulnerable when I talk to them. When I get involved with a guy, I’m usually hesitant to ask questions about what they want. Obviously I want to know if I’m wasting my time or not, but I don’t want to ask “alright, what do you want?” within the first five minutes of conversation.

But at the same time, why wouldn’t I ask that? I want to know the answer, don’t I?

I mean, being in a hookup culture and searching for meaningful interactions with other people can be really hard. Seriously, if I have to respond to another message with “nothing much, what about you?” one more time, I’m going to lose my mind.

So I updated my profile on Hinge and created one on Tinder and connected with a ton of guys from each app. I mean like, my eyes hurt from looking at my phone screen and swiping left and right. I wanted to match with at least 10 guys, just to see how they all respond to my question. I was going to be super honest on these apps–wholeheartedly myself in every aspect with no reservations.

Are guys on dating apps looking for a casual hookup or a serious relationship? I needed to know.

I went to Tinder first, just to get it out of the way. I had to give myself a little pep talk like, hey, just swipe on literally any dude.

So after quite some time, I got one. 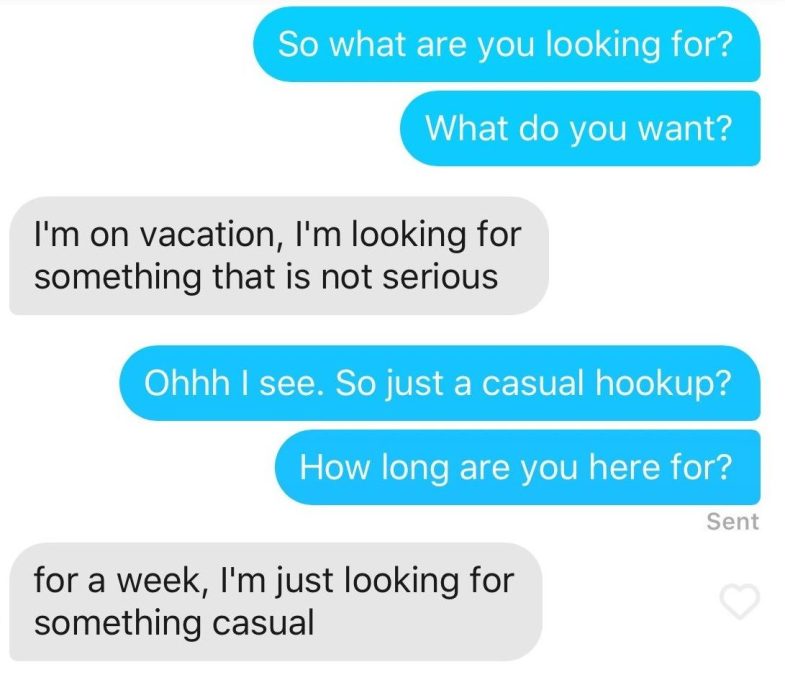 This one actually made me a little nervous because he was pretty cute. 27 years old and with a bunch of tattoos. My type! But his answer? Yeah, I was disappointed, but honestly not surprised. 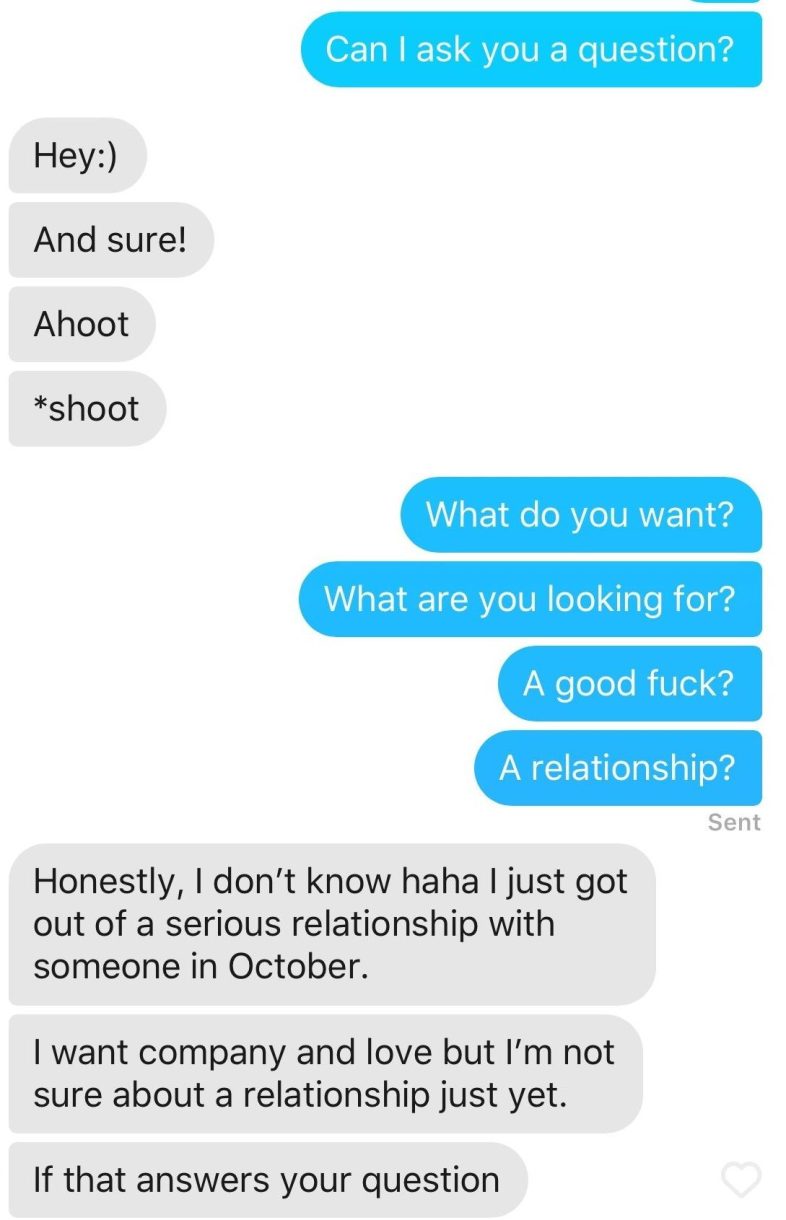 This 24 year-old was a cutie. He was pretty engaging in conversation which was nice. His “honestly, I don’t know” response felt genuine to me. Like, okay maybe he wants a little bit of everything but legit just doesn’t know what he wants the end game to be. 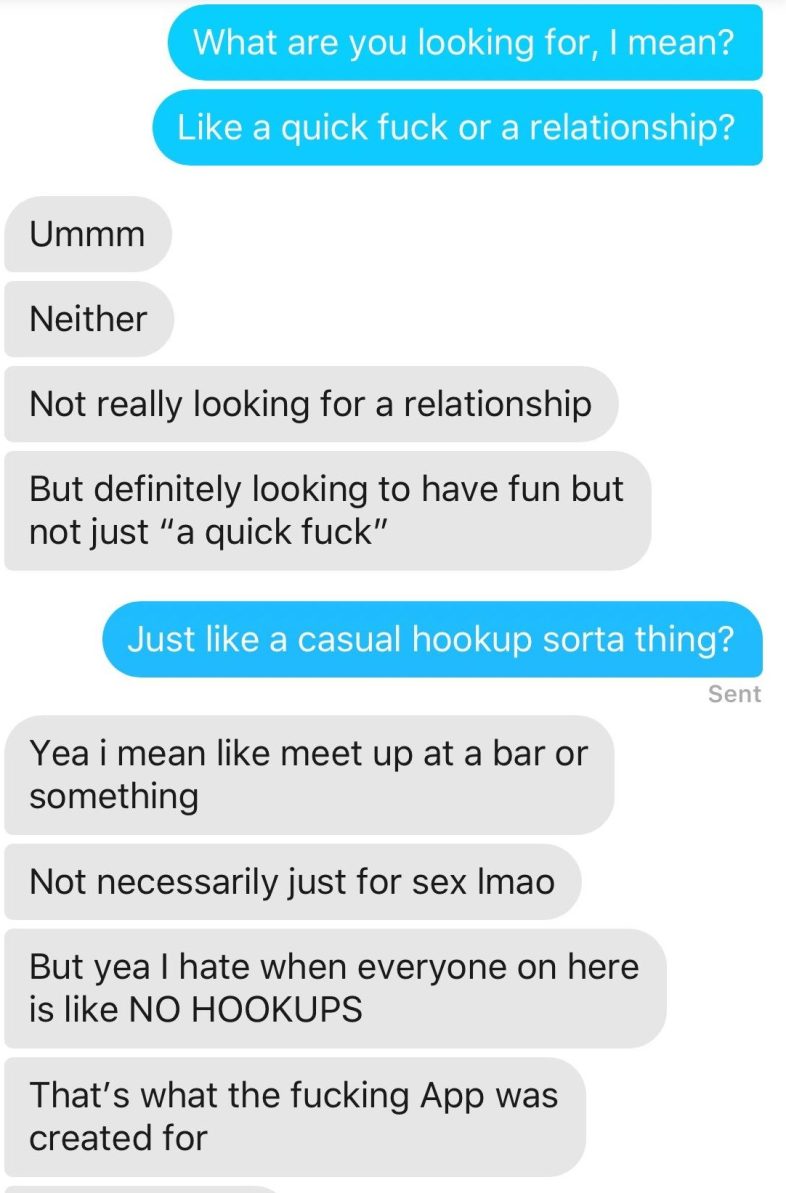 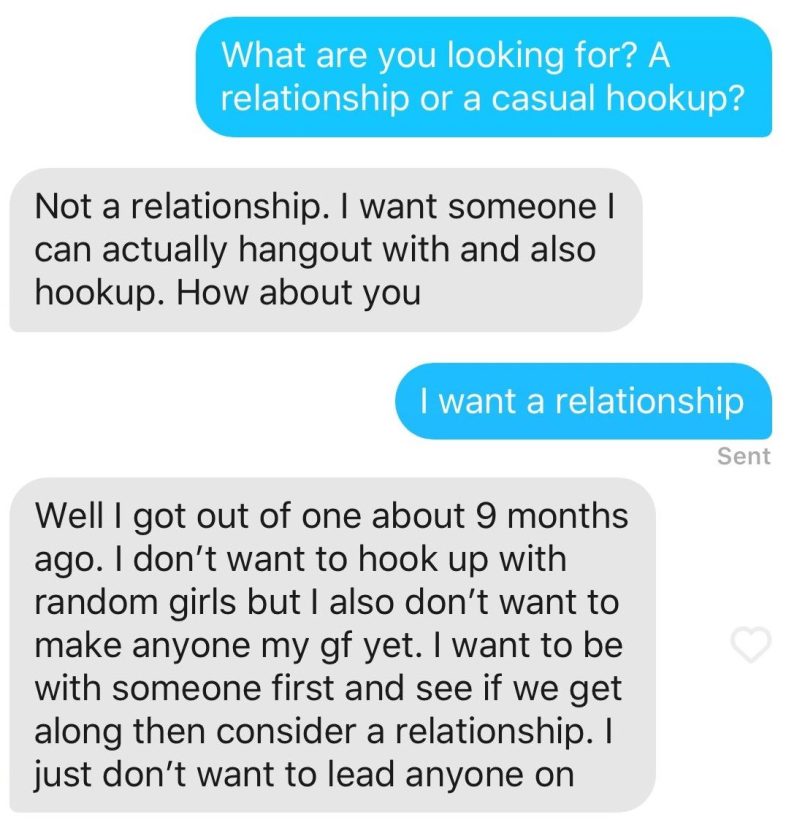 My first impression of this guy? I was annoyed. Something about him seemed…off. The whole “consider a relationship” and “I just don’t want to lead anyone on” felt weird to me. 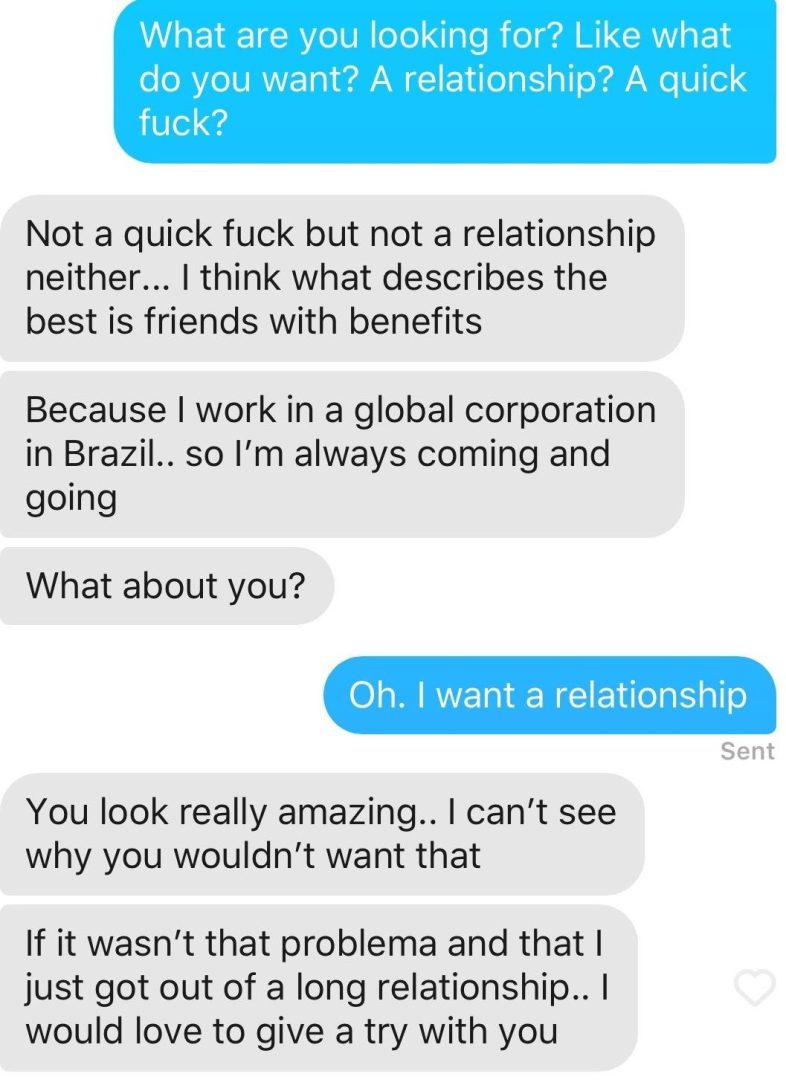 Something about his last two messages felt weird to me. “You look really amazing.” “I would love to give a try with you.”

…We’ve sent three messages back and forth before I asked this question. How do you know already that you’d want to try a relationship with me? I don’t know, dude. Weird.

So let’s go to Hinge.

I like Hinge. I’ve been using it for a couple months now–I haven’t really had conversations with anyone, but I just enjoy some casual swiping while I’m watching TV or waiting for the subway. 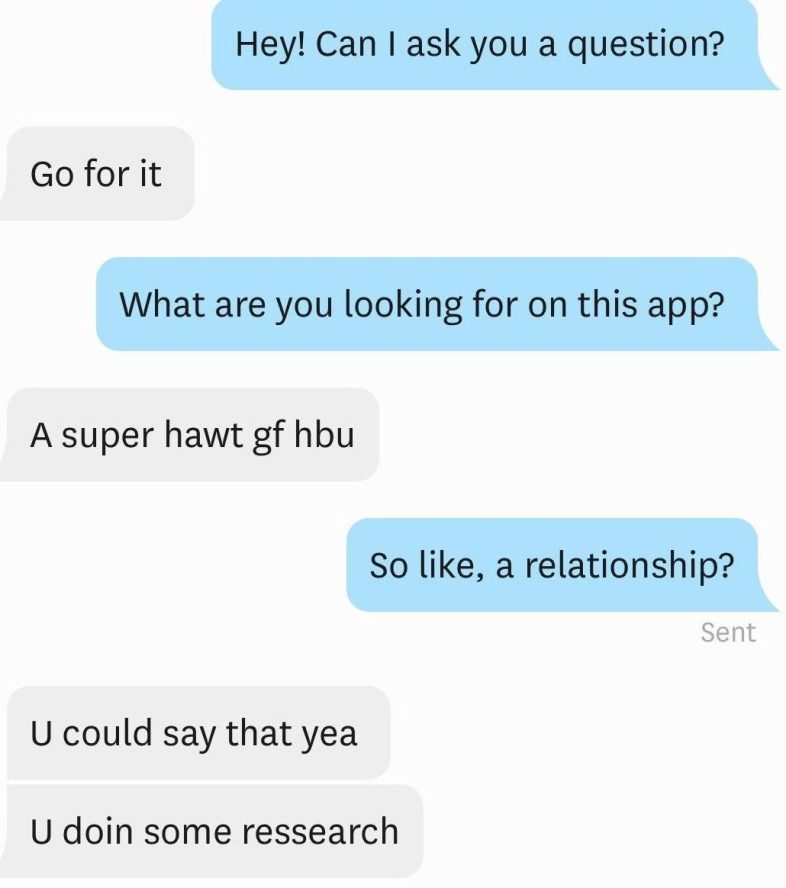 …this guy was onto me.

Okay but for real, we started to have good conversation after that. Until he just stopped answering. Whatever. Next! 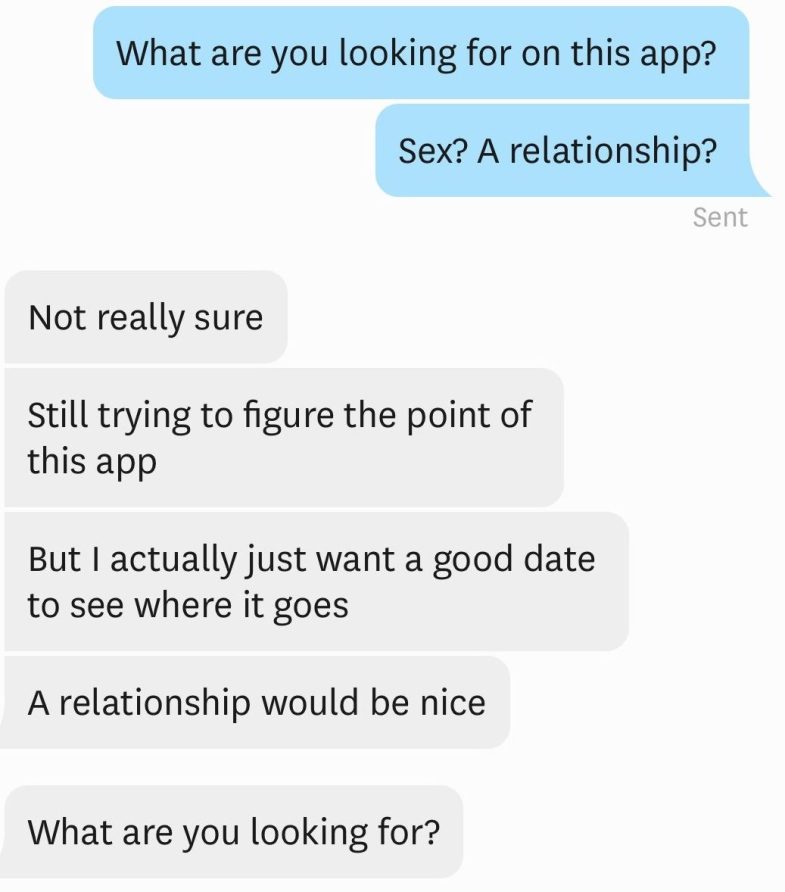 This was a little more unexpected. He wanted to know what I wanted? That’s different!

I didn’t respond to his messages but he still felt the need to send me his phone number. Sorry dude, I’m not gonna text you. This conversation was just for science. 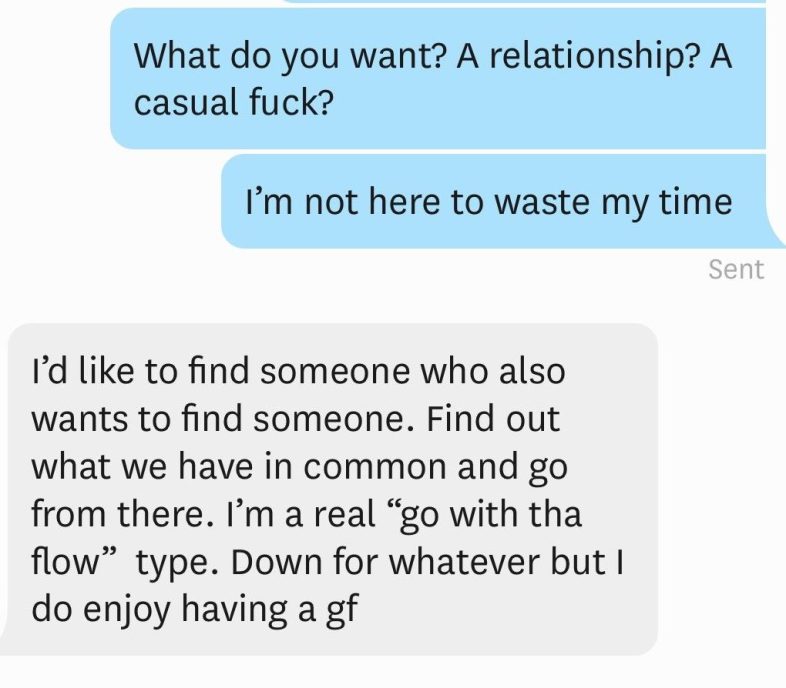 I hate being a hopeless romantic. Of course I got all mushy at that response. He was genuine, I think. I don’t know. It was nice. 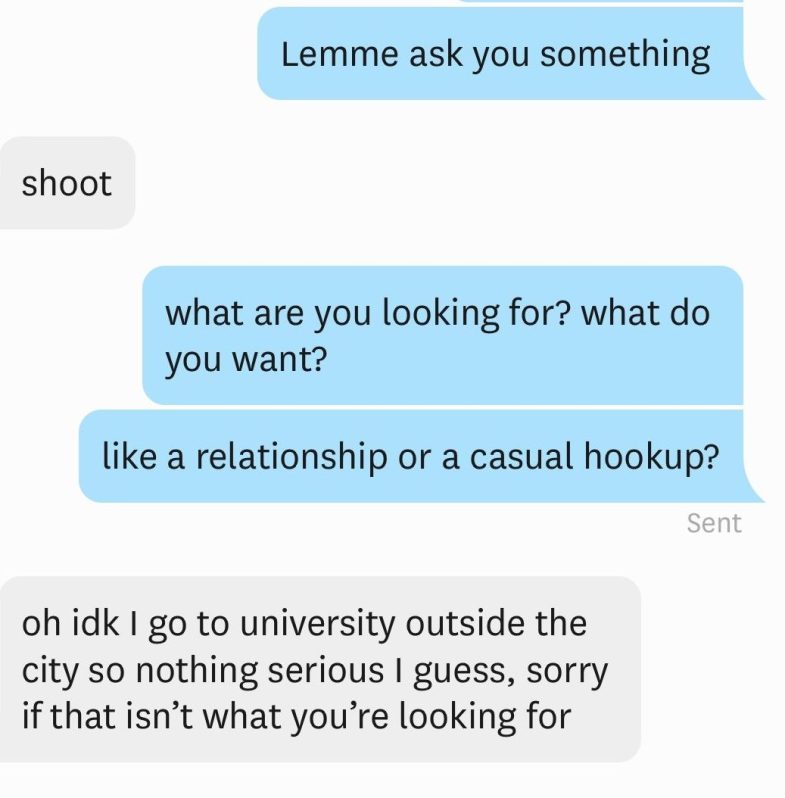 Thank u tho, next! 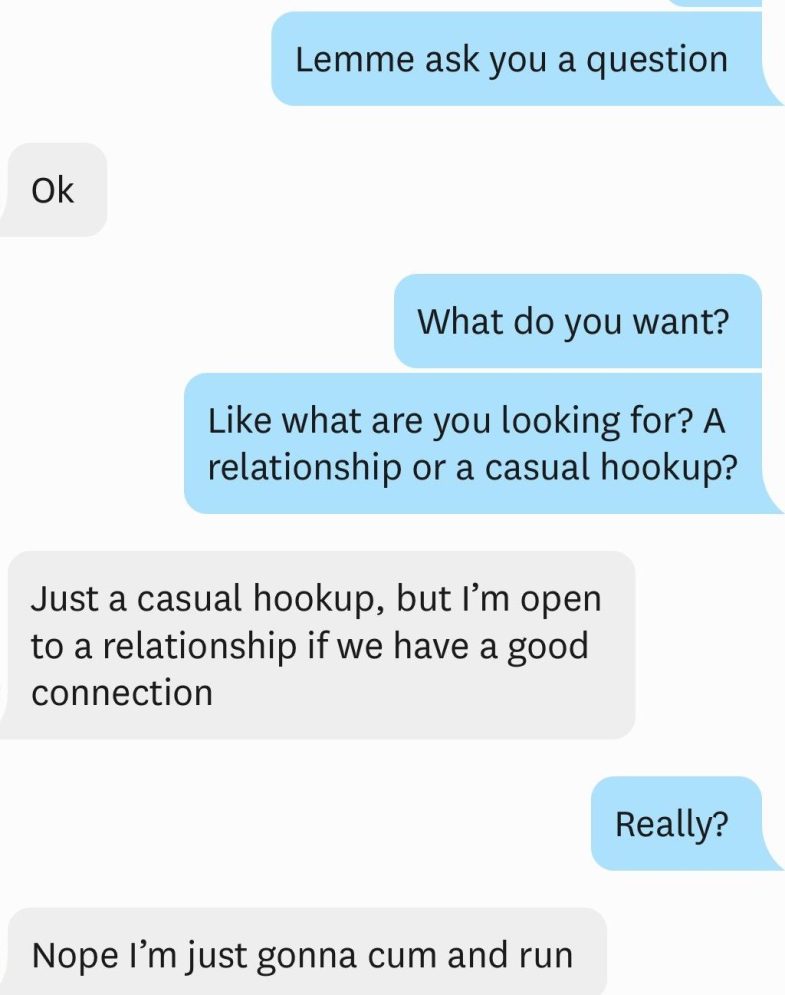 ….at least he was honest?

Or maybe this is sarcasm?

The point is, after hours of swiping and matching and even stumbling upon an ex-fling, I came to this conclusion: it’s okay to be vulnerable with a guy you match with.

I noticed that my matches and conversations on Tinder happened a lot quicker than the ones on Hinge. Before I had ever downloaded these two apps, and even going into this journey, I assumed Tinder was for hookups and Hinge was for something a little more serious. After actually spending a lot of time on the apps, I realized that you can want whatever you want on whatever app you’re using.

I want a relationship and I made that clear in some of the conversations with my matches. It was pretty hard to find someone who said they wanted the same thing.

If you’re reading this and you’re looking to download a dating app, just do it. It’s fun to talk to people and you don’t have to marry the next person you match with. But if you’re someone who is looking for a relationship, don’t be afraid to tell your matches that. Some guys might want the same thing. They might surprise you. But before you download the apps, ask yourself: what are you looking for? What do you want?