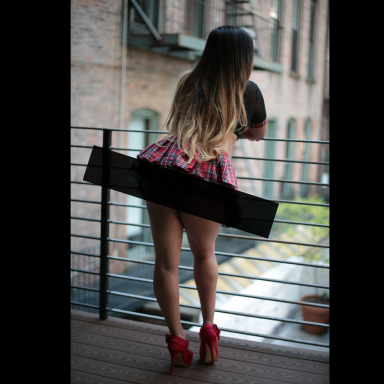 When I was in my early twenties, I did something I had never done before: date more than one guy at a time. It all started when I discovered that a film director I had been dating had been dating multiple women (while I was only dating him). He claimed it was due to “insecurity,” said that he felt I was out of his league and told me that he assumed he wouldn’t have gone far with me without having some “backup options.” From then on, I realized no one was going to protect me or my feelings in the dating world and that exclusivity should never be assumed.

So I decided to conduct my own experiments in dating multiple guys at once – without sleeping with them unless a man and I became exclusive and he was the only one I ended up dating. Unlike that film director who did sleep with the women he dated even before they were exclusive, I wanted to date with more integrity and transparency, but I also wanted to explore my options and know what it was like.

Here’s what these experiences taught me:

1. Dating “like a man” was at first, admittedly, a high. It taught me how much fun men were having – and were allowed to have – without judgment in our society.

I remember being at work and texting several of these guys at once within the same hour. It was addictive. There was never any shortage of witty banter, flirty interactions or fun dates during those months. I was on a perpetual rollercoaster of highs and lows, not knowing what would happen next. It was unpredictable and it was a much needed break from my routine life of work and school. I would go on multiple dates a week: to sexy speakeasies, cool bars, clubs and restaurants. I danced, I drank, I laughed, I enjoyed myself. Every night was an adventure and each first kiss or hookup was electrifying.

I’ll admit it: it was great. That summer, I got to “try” out each type of man that I enjoyed: whether it was the intellectual who playfully sparred with me, the bad boy who challenged me, the successful CEO who taught me important tips about starting my own business, the delicious bodybuilder who was fun to cuddle with in bed, the software engineer who took me to comedy shows, or the interesting hybrid of all four, I felt on top of the world. I had my “fun” without stepping over the line to having actual sex. Having multiple dates with each person allowed me to get to know their personality without fast-forwarding the physical process.

Then it occurred to me that most men probably do sleep with the multiple women they see, and they don’t have a problem with it.  Isn’t that how many men in our society have been dating all along? While a woman is pining away for a relationship status or a text back, there are plenty of men who date like this without qualms or obligations.

Dating like a man placed me back in control – of doing the choosing rather than waiting to be chosen.

I understand why society has such a resistant attitude towards women dating multiple men. It’s because it’s afraid of the power it gives us. If women dated like men did, it would place them back in the driver’s seat. They would know which man was treating them well, and which man wasn’t – in a heartbeat, just by comparison. And if they knew they had options, they would be able to drop the men who weren’t treating them well with that much more confidence.

Yet as women, we are taught to “wait.” Wait for the phone call. Wait for the text back. Wait for a guy to make the first move or to call us his girlfriend. We are always perpetually waiting – while they are out living.  In my opinion, every woman should try “dating like a man” at least once in their lives to get a taste of the freedom and excitement that have always been accessible to men.

Every woman should know what it’s like to stop waiting. Especially women like myself, who’ve always restricted themselves to a very rigid view of monogamy even before becoming exclusive.

2. “Dating like a man” while you’re a woman leaves you vulnerable to scrutiny because of the unfair double standards involved.

Since women are stereotyped as those who want that “ultimate relationship,” even the most emotionally unavailable of these men seemed to be disturbed by the fact that I was exploring my options. I was slut-shamed in countless ways and judged for doing something men had been doing for most of their lives. Can you imagine my disbelief when I discovered that even the men who professed they didn’t want a serious relationship found it unnerving that I was dating other men – even though I wasn’t even sleeping with them?

It was a baffling double standard. Even though they had been the ones to say they weren’t looking for anything serious, they seemed taken aback when I replied, “Neither am I” which eventually led to a few cringeworthy discussions about the number of guys I was seeing. I came to recognize that being a woman meant that I was cast as either the Madonna or the Whore if I didn’t fit into any of their cookie-cutter expectations of me.

It seemed that it didn’t matter whether the men in question wanted something serious – they just wanted to have women waiting around for them regardless. They wanted to think of themselves as the only ones the women they were dating pursued, while they themselves were free to do whatever they wanted.

It was interesting how I was taught to protect the egos of the men I was dating, while they were free to pursue whatever pleased them. It made me wonder: what would a world where women were taught to please themselves first look like?

3. Even though I was being transparent and honest, the very act of seeing multiple people created as much chaos as it did excitement.

Although I didn’t need to share what I was doing, because I felt empathy for the men I was dating, I wanted to be honest with them if they did ask or if the conversation turned to the topic. Unfortunately, that honesty backfired. A few of them went on complete ego trips when they discovered I was going on dates with other people. One of them even claimed, “I’ll bet I am the most attractive and smartest one out of all of them,” defensively.

It reminded me of how women are often pulled into ‘competing’ for a man – and yet many men can’t handle it when they are the ones perceived to be competing for a woman.

I was also losing touch with who I was and questioning what this meant about my own character. I had a few days where I “double-booked” dates on the same day, or ended up responding to a text from a guy while on a date with another man. What was an exciting experiment also became cause for internal conflict and self-doubt. Was I immoral? Heartless? A “slut”? Emotionally unavailable? Did it even matter? Why should I care?

I knew I was just doing exactly what men had been doing for years, yet I had been conditioned to feel ashamed about owning my freedom and sexuality the way men have been doing for decades.

Dating multiple men was a thrill, but at the end of the day, it was admittedly exhausting. It increased the potential for getting my heart broken and it created a lot of drama that didn’t need to be there.

Although I did end up dating a “second round” of more men at once later on, I also eventually realized that dating one at a time was more suitable for my personal style. That doesn’t mean I would never do it again. It was an important part of my journey and crucial to my self-discovery. Let’s face it, if you’re not exploring new things in your early twenties, you’re not living.

That being said, dating multiple men at once did teach me a lot about the double standards that women face in our society and about the ways in which modern romance could stand to evolve – especially in the ways in which the dating world treats women and what it expects of them.