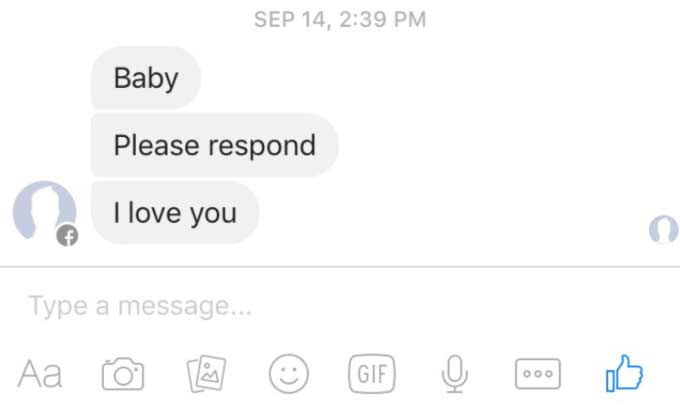 “After moving 1,784 miles away for college, cheating on me with another blonde haired blue eyed girl, and then breaking up with me via text message…his last message to me. I didn’t believe him.” 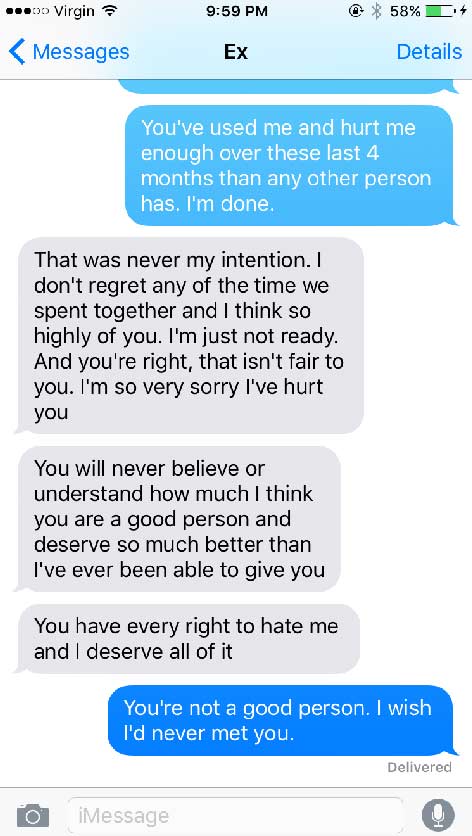 “4 months of my life wasted with someone who only dated me to try and get over his feelings for his ex.” 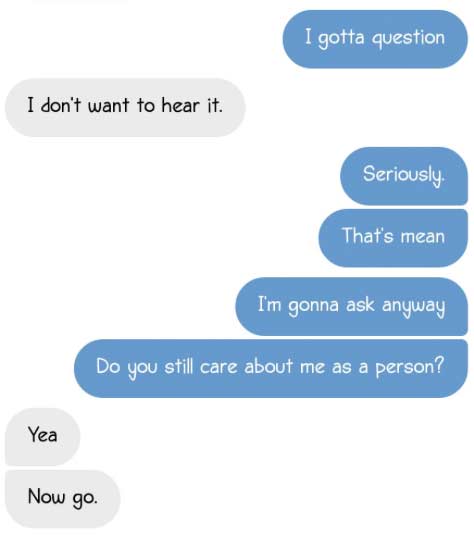 “We dated for over a year, broke up with me on our anniversary, tried to make it clear he wanted to leave cause his unhappiness and not because of another girl, then proceeded to go out with the one girl I was always told not to worry about two weeks later.”

“He told me he was going on a trip, but he commited suicide and these were his last words. I miss him terribly. (I’m a person with sleep and food disorders).” 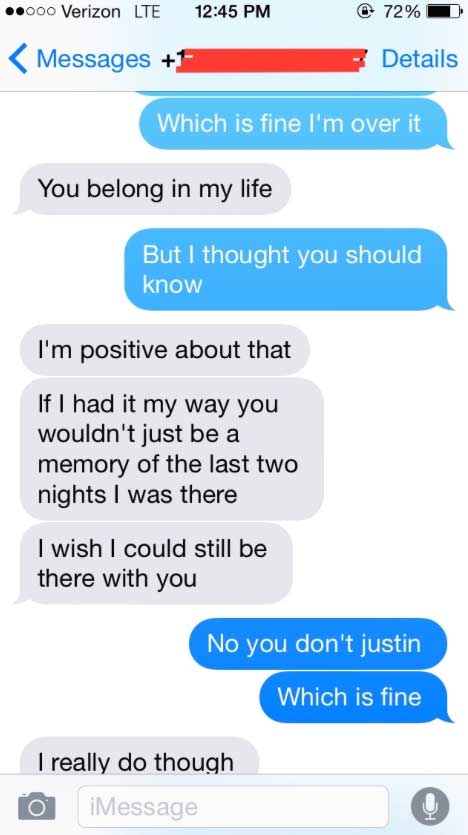 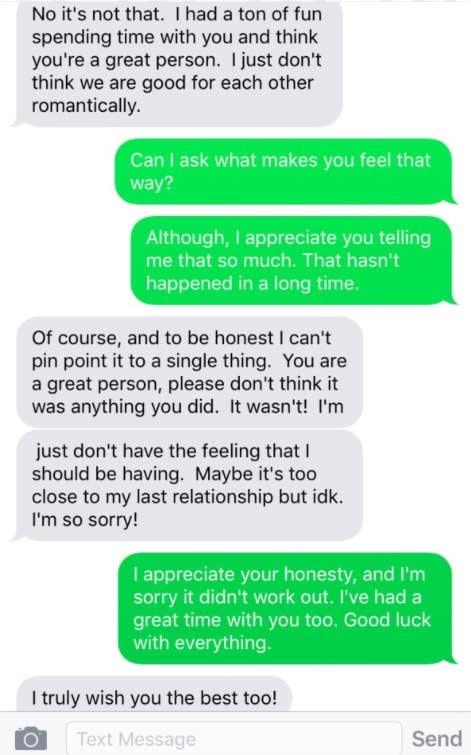 “I had 2 ghosters, so naturally I respect his honesty and communication. However, even though we had only dated a few times, the last time we slept together & I thought it meant something to him. It’s weird to think how someone makes such an impact on your life only to know you’ll never talk to or see them ever again.” 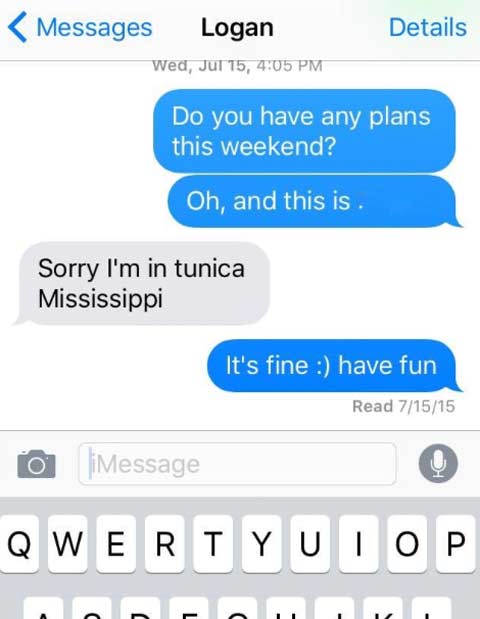 “He was my best friend all through middle school. We saw each other at least 6 days a week for years because we went to the same small school and the same church. Freshman year of high school he made a bunch of new friends and started talking to me less and less. Sophomore year I was accepted to a residential high school and every time I came home he asked if I was going to come back to our home high school. People from my home high school stopped talking to me and I was desperate for a friend over school breaks, but he continued to avoid me. This was my last attempt to talk to him before senior year started. I knew that once we left for college there would be almost no chance of us reconnecting. It still makes me sad to think about the friend (practically brother) that I lost. I guess he meant more to me than I meant to him.” 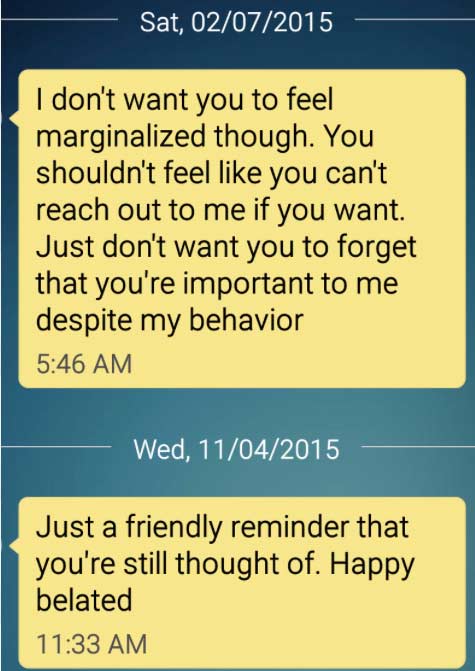 “We were friends for 7 years. We dated for almost 4. I thought I would marry him. He told me multiple times that he would always be there. He broke up with me for a month, sexted my ex best friend, and then I took him back (do not recommend). He played with my emotions for years. I broke up with him to deal with anxiety and depression issues stemming from my best friend’s mother’s death. He told me I was so messed up nobody would ever love me again, that I was too broken. Saw him a couple of years later, he told me he didn’t want to talk to me ever again, then sent me the message at the top. I ignored him. Then texted me the day after my birthday last year. I hope he just stays away.

Never give someone the ability to break you.” 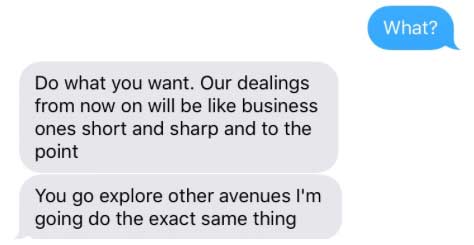 “We had dated for two years. Then one day he cheated on me and broke up with me over the phone. I felt like I didn’t deserve any better and for an entire year after that, month to month, day to day, I would try and forgive him. My heart wanted to. We cried, we laughed, we hugged, we fought. But in the end I couldn’t trust him again. This was our last conversation where we were straight with each other and I said that I needed to do what was best for me and shut him out.” 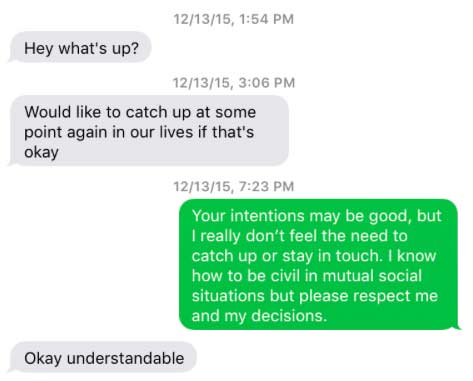 “Removing toxic people from your life is the first step in self-love. It can take time. Courage, while delayed, is still courage.” 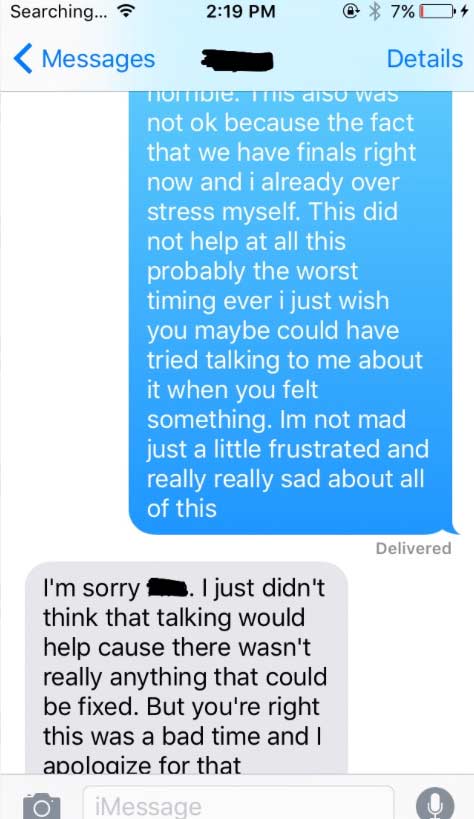 “This was the last text he sent me after he broke up with me for no reason. He clamied it was because of my friends, but I felt that it was something else. He sits with the girl he liked before me everyday and makes sure I see it. He says hi to me in the hallway often and I pretend I don’t hear it but more than anything I just want to tell him how much I miss him. Even though I miss and love him so much right now, I know that if he tried to come back I would never give him the opportunity. He broke my heart and that is something I will never forgive him for.” 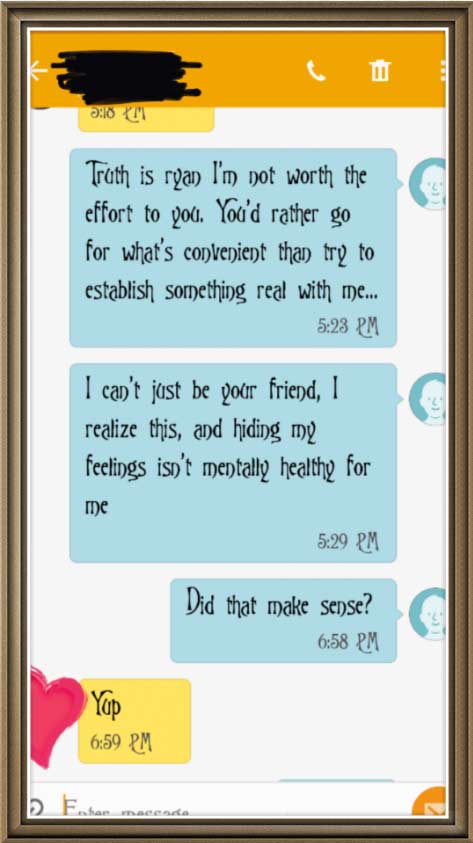 “We were friends for 9 years, and we decided to try a relationship, it lasted two weeks. when I visted california for a week we saw eachother, about 3 days after I returned to my state, I found out he was talking to another girl. After 9 years I couldn’t do it anymore. ‘Yup’. It’s been a year” 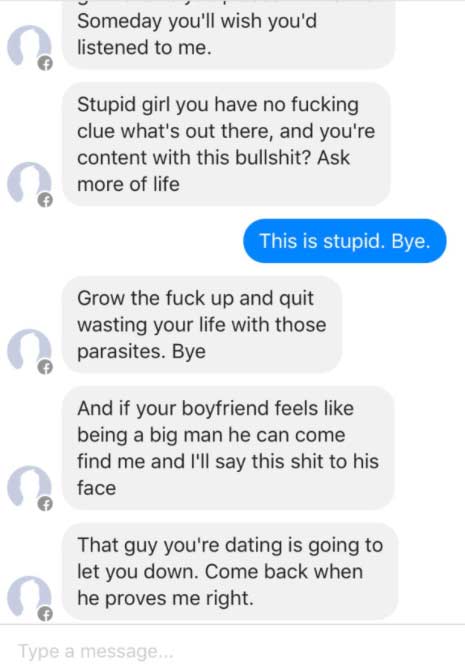 “I blocked him. Oh, and I’m still dating that boyfriend of mine. Who hasn’t ‘proved him right’” 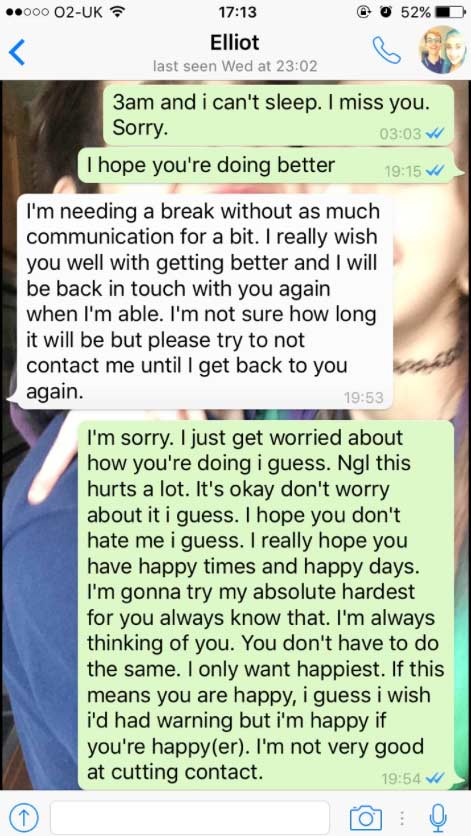 “We were in a relationship for a year and a half. He lives in Ireland, I live in scotland. It was hard. I love him still and thought he was all I had. He started getting help for mental illness while I still struggle. He then out of the blue cut contact with me. He never gave me an explanation. He still talks to my best friend and I don’t know why. I doubt he’ll ever come back but I can’t distract myself from thinking about him. We went from talking and calling every day to absolutely nothing and i’m struggling without him. I just don’t understand it all. I miss him more than anything.” 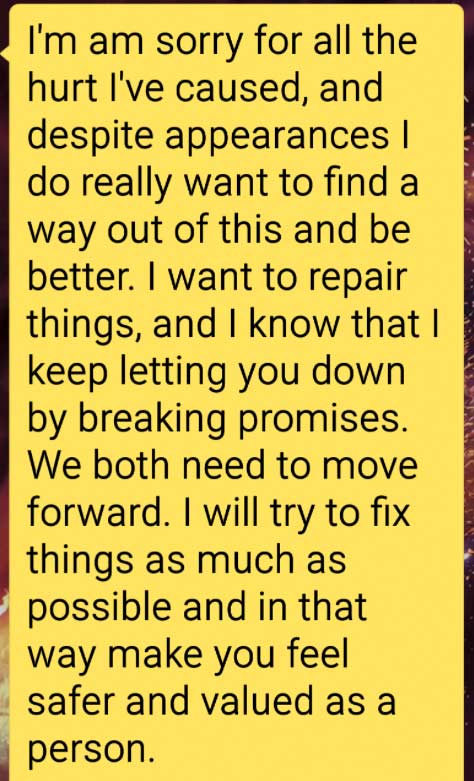 “She had cheated. She had lied and hidden it. It came out. She ran. We tried to reconcile. We started working through. Hours after sending this she actually said on the phone that ‘honesty and loyalty are too much to promise’, severed all contact, and was gone.” 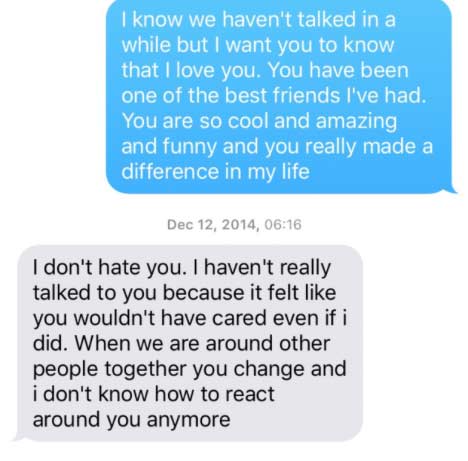 “she was my best friend for seven years. she and I were practically inseparable. all of a sudden, she stopped talking to me. nothing else had changed, but since then we haven’t spoken a word to each other.”