It’s been previously reported that the extremist group called the Islamic State has been taking slaves out of Iraq and Syria’s Christian and Yazidi population but today a price list for these captured women has appeared in the press via Iraqi News. 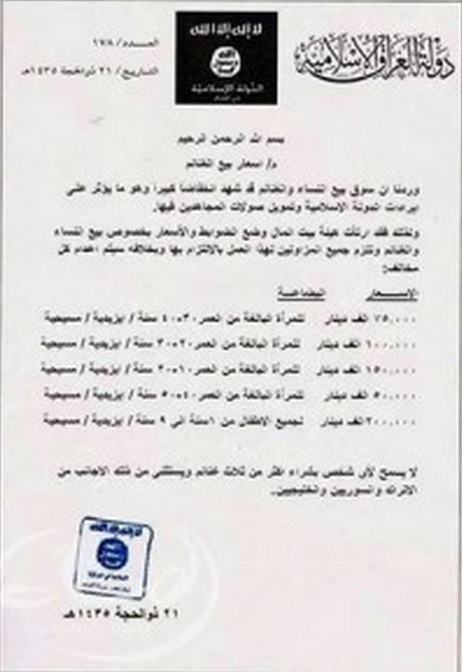 Note how valuable the 1 to 9 year olds are as compared to the rest. If the reported information is true then this price would seem to reflect that girls that age are seemingly guaranteed virgins since I can’t imagine this is simply an adoption opportunity for Islamic State militants.

A report in mid-October described unthinkably brutal conditions in which these Christian and Yazidi women are raped over and over again. One woman who managed to get a phone and called the Kurdish Peshmerga stated the following, according to the DailyMail:

Describing the woman as crying on the phone, Karam quoted her as saying: ‘If you know where we are please bomb us… There is no life after this. I’m going to kill myself anyway – others have killed themselves this morning.’

‘I’ve been raped 30 times and it’s not even lunchtime. I can’t go to the toilet. Please bomb us,’ he claimed the woman added.