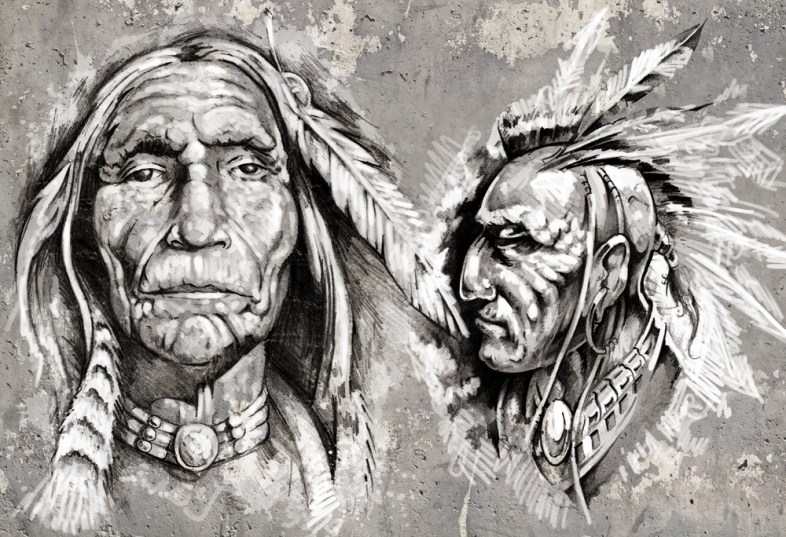 I’d wager that most people (including me, until now) aren’t aware that over half the states that make up the union we call the United States are actually Native American words for the land or the people that White settlers simply adopted as they spread across the West. Here are all 26 states as well as the meaning of their names according to the Nevada Dept. of Tourism and Cultural Affairs and various state websites.

Named after the Alibamu tribe of Indians who were members of the Creek Confederacy. Literally, it means “clears the thicket.”

From the word “Alakshak’ which means peninsula.

This one’s uncertain but may derive from a word meaning “small springs.”

From the expression “quinnitukg-ut” which means “at the long tidal river.”

From the words “Havaiki” or “Hawaiki,” which was the legendary name of the original Polynesian homeland.

From “ilhiniwek” or “illiniwek”. “Illini” meant “man” and “iwek” makes the word plural, so, literally, “men.”

Named after the Ioway Indians.

Named after the Kansa Indians.

Means one of three things: meadow lands, cane and turkey lands, or dark and bloody ground.

An Indian word meaning “about the big hill.”

From the Choctaw word meaning “Great water” or “Father of Waters.”

“Town of the large canoes.”

Named after Mexico, of course. Means “place of the Mexica.” One source says that it’s derived from the name “Mertili” who was an Aztec god.

From the Iroquois word meaning “beautiful.”

This used to all simply be called the Dakota Territory. The Indian word “Dahkota” means “friends” or “allies”.

From the Cherokee “Tanasi” which was a village. The word means one of three things: “meeting place”, “winding river”, or “river of the great bend”.

Derived from the Ute Indian word “Yuta” meaning “people who live high in the mountains.”

From the word “Wishkonsing” meaning “place of the beaver.”

“On the Great Plain.”

80+ Unique Moon Names And Their Meanings