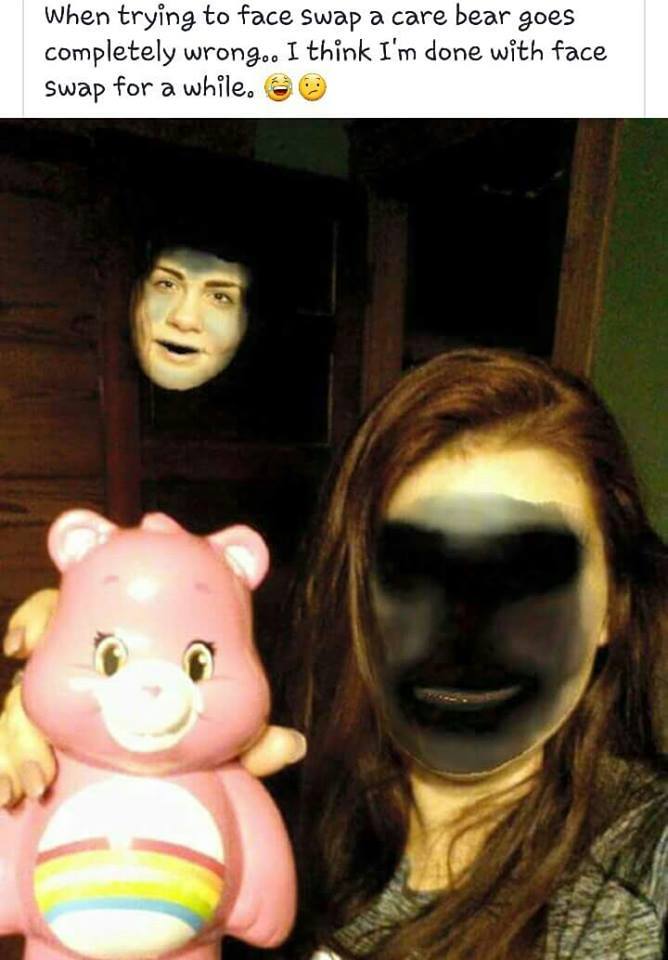 This eerie picture was posted by Jenna May Cobb on Facebook earlier this year. According to Jenna, she was trying to perform a “Face Swap” with her carebear, but this happened instead. Snapchat seems to have honed onto some entity that was either right in front of, or right outside the dark window. Nobody has been able to fully debunk this image, aside from saying it is some kind of “glitch.” This very spooky picture doesn’t involve a face swap, but just involves someone taking a fairly casual mirror selfie. However, when you look in the background of the picture you cannot help but be shocked.

3. Why was the ground swapped?

Some context on this one. For the face swap feature to work, the Snapchat app must detect another face in the phone’s view. Many people struggle to even swap faces with animals because Snapchat just doesn’t detect a face it can recognize. In this picture, it just swapped a face with a section of the ground. How did that happen? Unless, of course, there was something there unseen…

This video is very interesting because the face is appearing multiple times from slightly different angles. The man in the video is trying to touch the entity while it appeared on Snapchat — but he was actively not able to. Some people suggest, however, that this only occurred because of the bright lighting.

5. Face in corner of view

This Snapchat was a captured by a girl who was reportedly, “very freaked out by it.” While the YouTube video reporting on this freaky pic insists this is “obviously a fake,” they don’t exactly explain precisely why. Form your own conclusions here.

Another creepy video. Many people in the comments section seem to think this is just a glitch.

7. This happens quite a bit to this person

What is most remarkable about these Snapchats is how often this individual experienced this phenomenon. Either they are actively faking it, or it looks like there is some entity haunting their place.

The story behind this picture is that an employee working late at the hospital was being pestered by his untrusting girlfriend about where he was. To satisfy her, he snapped her this photo of the hallway to her via Snapchat and she was FREAKED out by what she saw.

Toward the end of the hall, there appears to be a nurse in old-fashion garb entering a room.

9. What is Snapchat detecting??

This video gives us ten seconds to examine the possibility of paranormal activity. While it is very creepy, some people have suggested that the air vent might explain why Snapchat thought there was a face to latch onto.

This photo is particularly freaky because — if you look closely — you can see an actual face below the floral crown. Very crazy, and nobody seems to have an obvious answer for this one.

Yet another face swap with darkness. Could be a glitch, or could be something else…