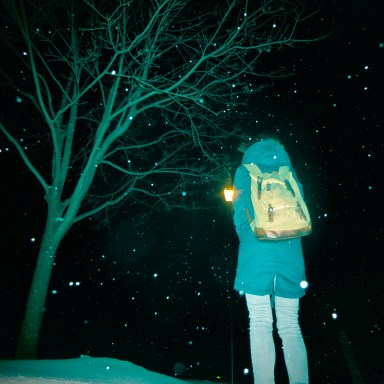 I had just gotten out of the car and closed the passenger door behind me when my phone rang. I motioned to my boyfriend to go on ahead and that I’d be right there. He decided to stand about 15 feet away from me. I turned my back to him and took in the barren view of the Ikea parking lot on a dreary spring day.

They said they’d call within two weeks if anything was wrong. Although it had been well over that amount of time, I still had a gut feeling it was them.

“Your tests came back positive for genital herpes,” my doctor said to me.

At 20, I thought STDs were something “other” people got. Who I thought those other people were beats me.

I hung up the phone and slowly walked over to my boyfriend to tell him what had happened. He stood there for the duration of the call, calmly waiting. I was too in shock to realize his nonchalant response of, “No big deal, I’ll go to the doctor when we get back” was a potential red flag. He showed no emotional change whatsoever from before I told him to after. But we were in a monogamous relationship, so I assumed there was no chance this had come from him.

As a side note, if you’re ever trying to save money on your Ikea shopping trip, having your doctor tell you you have herpes in the parking lot definitely helps. You care far less about interior decorating once you get inside.

We got back from our trip and weeks went by with no second mention of my herpes bombshell. Finally, I brought it up over drinks one afternoon. He casually said his doctor told him he also has herpes but that he still loved me even though I had given it to him. I couldn’t figure out what was happening. Why didn’t he immediately bring this up to me when he found out? I felt the guilt of passing this on to him coupled with the already confusing emotions of being in this situation in the first place.

He never did admit to me the truth, though he called me years later to apologize. When I asked him what for, he hung up.

That was roughly five years ago. My dating life was entirely upended from that point forward. Suddenly men who would’ve gone out with me before, were ridiculing and rejecting me because of my STD status. Friends I trusted, years later, would post that I had herpes on the Internet. My own mother banned me from using her toilet when I would visit her because she “didn’t want to catch my diseases.” Girls I knew would see me meet a man and “out of protection for his safety” disclose to him that I had herpes before I could even go on a first date.

When obnoxiously optimistic people would give me the “Don’t worry, you’ll meet someone who will love and accept you for everything that comes with being with you” speech, I wanted to triple punch them in the face because they clearly lived in a fantasy world I’d never been invited to.

When I first met my current boyfriend, I was so blown away the second I saw him that I entirely forgot I even had herpes. Which was probably for the best, because I couldn’t figure out how a man that handsome, with a killer personality to boot, was even single. Had I had it in the forefront of my mind that I eventually would have to disclose to him that I had herpes, I might’ve psyched myself out and never spoken to him at all.

Once we had been dating for a few weeks, I felt he had a right to know. I couldn’t bear the thought of telling him in person and having to stare into his eyes as I spoke, so I decided to call him. I listened to the phone ring. And ring. And ring.

When you really NEED someone to answer the phone they NEVER answer the phone. By the time he finally called me an eternity (12) minutes later, I had gone through the conversation so many times in my head I just blurted it out to him. I repeatedly told him he could dump me if this was too much for him to handle. He quietly let me finish my unending ramble and then plainly stated he had no prior experience with herpes, but felt no differently about me and was interested in continuing to date me. What a fairy tale ending, right?

What never occurred to me is what happens after you finally meet someone who accepts you, herpes and all. The reality of that dawned on me pretty quickly, when my sexual frustration grew after weeks of chaste nights spent together. We had avoided intimacy almost entirely up until that point. Even kissing consisted more of light pecks than lusty make­-outs. I never said anything because I felt like pressuring him to be intimate with me would push him away. So I ignored my needs, assuming he’d come around eventually.

One night, while kissing in bed, my frustrations became too much to continue ignoring and I screamed “Are you ever going to have sex with me!?” To which he shouted “I don’t know!”

My heart dropped. I realized him saying he was OK with dating me although I had herpes didn’t mean he’d necessarily be OK with becoming intimate with me. He added, “I may never be comfortable having a physical relationship with you and that’s something you need to be okay with.”

Oh, I thought. No problem, let me flip the off switch on my sex drive and let’s carry on.

When we finally did reach a point he was comfortable enough to have sex with me, a whole new round of issues came up. He said things like, “You need to make sure you don’t give this to me,” and “You need to promise me that won’t happen to me. I don’t want us to break up and be left in the position you’re in.”

Those should’ve been signs that he wasn’t actually comfortable having a girlfriend with herpes. Each time he said something like that, my heart broke and I felt diseased and inferior. I brought this to his attention multiple times only for him to laugh and say it was a joke. I told myself he needed time to come to terms with the situation and that his remarks would improve over time.

Our intimate times together always had an air of “Look what I’m doing for you, the risk that I’m taking for you.” Over time, this didn’t change, but it got easier to live with. We successfully carried on an intimate relationship with some level of normalcy. I did my best to keep him safe, from avoiding intimacy while experiencing breakouts, and making sure we had protected sex. But I never felt fully comfortable. And I certainly didn’t feel attractive and desirable.

He recently decided this was no longer a relationship he wanted to pursue, for various reasons. I think when one partner has an STD and the other does not, it can be extremely difficult. He constantly felt pressured and scared, which in turn made me feel horrible. Surprisingly, being safe and keeping my partner STD-free was not our core issue. Prevention was much easier than anticipated. My STD was a mild physical issue but a huge psychological one.

This doesn’t sway me from dating another man in the future that does not have an STD, but I think I will have to be more cautious that my partner is ready to deal with what that means.

Evelynn Riley is a writer living in the US. Her interests include early bedtimes, books and bacon. She currently runs ...