I sipped on my hot tea, begging it to sooth my raw throat. I had been suffering from a crippling cough for two weeks now. I couldn’t seem to shake it no matter what I tried. I felt like cough drops were the only flavor I’d ever taste again. My chest hurt from all the heaving and hacking, a deep irritation that flared whenever I would fall into fits.

I sat up a little more in bed, listening to my empty apartment. I wished I had someone here to take care of me. Like a loving girlfriend or even a close friend. Nope. Just me. I hurriedly took another steaming sip of tea, cutting off another cough in my throat. I needed to go to sleep, the repetitive wheezing exhausting my sick body.

The tea helped, if only momentarily. Any respite from my illness was welcome though and I let the hot liquid coat my throat in its herbal warmth. I didn’t know why I couldn’t rid myself of the cough. I had seen the doctor twice about it but no matter what he prescribed, the intolerable hacking continued.

Miserable, I set my mug down on the nightstand, giving in to my drooping eyelids. As I slid down into my covers, I felt my chest hitch and I wracked out a series of scratchy wheezes. I closed my eyes and grit my teeth against the sharp pain in my throat and chest. Every time I coughed it felt like a hammer being drilled into my sternum. The walls of my throat cried out as if I had swallowed razor blades.

I just wanted to sleep. The moon trickled in from my window and washed over my face in a cool white glow. I wondered what the moon tasted like. Probably like a fucking honey lemon cough drop.

I turned over on my side, clutching my chest as I hacked again, my body convulsing with rapid punches of pain. I groaned. I blindly grabbed another cough drop from my mountain on the nightstand and unwrapped it in the dark. I needed a new flavor. Sighing, I popped it into my mouth and my taste buds were soon flooded with the familiar taste of being miserable but trying.

Even sucking on the fake candy, I felt a tickle in the back of throat. It was a sensation I had become familiar with and grown to despise. It meant a big one was coming. I sucked on the cough drop harder.

My chest was killing me. It felt like a collapsed cavern and all my organs were trying their best to work around the rubble.

That tickle again. I put a hand around my throat, squeezing my eyes close so hard they watered. My lungs filled with air and I expelled it in a series of thunderous explosions. I thought I tasted blood as my bones crunched around my lungs.

Gasping, the spasms passed and I wiped my lips with a shaking hand. I took slow deliberate breaths, begging the ache gripping my body to cease. I felt like I was trapped in a giant vice that was slowly squeezing me tighter and tighter.

I cleared my throat and felt that tickle again, but this time it was stronger. I slapped my neck, trying to batter the feeling away. I needed to sleep, escape this torture for a couple of hours. I knew I wouldn’t be able to if the itching kept up.

Tonight was worse than it had ever been. After two weeks, the sickness seemed to be reaching its climax and I dreaded the inevitable long night ahead of me. I realized I had sucked the cough drop out of existence and so I reached for another. They were my only chance, my blue pill, let me forget Morpheus!

I sucked on the wretched thing and settled back down into my bed. I spaced out my breathing and forced my body to settle.

As if by magic, my body remained silent. I gently sucked on the drop like a pacifier, slowly feeling sleep creep closer. I was almost there. My thoughts began to slur together like running paint. Soon they were being wrestled from me and formed into half dreams. I gave in and let my subconscious take them.

My eyes snapped open suddenly as my throat erupted in intense discomfort. A tickling so strong that I sat upright as the cough rocketed from my chest like a cannon blast. I crunched over in bed, gripping the sheets in my shaking fists. My throat felt like I was expelling glass shards as I hacked. My chest screamed from the force of my wheezing and I suddenly saw blood splatter onto my comforter.

It didn’t stop, my body convulsing as the seizure of hacking agony took me in its violent grip. My head cracked and my ribs screamed, a hurricane of sickness drowning my senses.

Suddenly, I felt something enter my throat, brought on by an especially brutal cough. It tasted awful and it felt like a gelatinous mass of congested mucus. It was stuck in the bottom of my throat like a long strip of wet cloth and I gagged, trying to force it from my bloody windpipe.

My eyes watered and my eyes bulged as I realized it was blocking off my air flow. Panicked, I desperately forced my coughs to come harder, clenching my chest muscles and blasting air up my blocked pipe.

I dry heaved as I felt the wet mass flop around in my throat and the familiar tickling returned, bringing with it such discomfort that my stomach gave in. Vomit volcanoed from my churning gut and I leaned over the bed as it rushed towards my gasping mouth.

Because of the blockage, the puke redirected and ejaculated out of my nostrils. It felt like wet fire as it splashed onto the floor, twin streams of boiling lava.

I wiped my nose, mouth still open, and drool stringing from my lips.

I got up and rushed to the bathroom, feeling the mass of gooey substance twist in my throat like it was alive. Hyperventilating, I crashed into the bathroom and turned the light on. I jammed on the sink and immediately sunk my head to drink.

The water splashed down my throat but came gurgling back up. I gagged it back into the sink, now colored pink from the blood in my mouth. I was beginning to get dizzy, my lungs starting to ache from the lack of oxygen. I knew I didn’t have long to get the blockage out of my throat.

I opened my mouth and leaned towards the mirror, trying to see what was causing it.

My eyes widened and I felt my stomach flip again.

I tried to scream, but the air wouldn’t come. The corners of my vision had begun to darken and I felt my head swelling.

I knew I had seconds. Without thinking, I jammed my hand down my throat, my jaw cracking as it was forced open. Tears leaked from the corners of my eyes as I desperately tried to grip the squirming mass of flesh. It was like trying to grab a bloody caterpillar and my fingers slid from its wet surface as it twisted away.

Drool ran down my arm in slobbery curtains and my bloodshot eyes squeezed shut, trying not to vomit again.

I caught the tongue in a vice like grip between my thumb and pointer finger. Slowly, I pulled it up my throat to grip it in my fist. It fought against me, but I wouldn’t let it go. It was a prisoner in my soaked hand and I could feel it trying to wiggle back down my throat into my chest from where it had grown.

I suddenly vomited again, the rush of hot bile cascading from my nose and down into my open mouth. I coughed and gagged as it dripped down my throat but I never loosened my grip on the mass of flesh.

Pain blossomed in a brilliant blaze of red across my vision as I began to pull the tongue out by its roots. My chest erupted in heart stopping agony as I felt the spider web of veins and muscle begin to pop.

I screamed, my hands shaking, as blood and vomit mixed and poured from my mouth down my chin. I could feel the tongue dislodging from its roots, a sickening tearing feeling in my chest. The tongue fought back but I never stopped ripping it out, despite the blinding pain.

With a defiant shriek, I felt the last root rip free like I was pulling a small tree from the soil. I retracted my hand, gripping the now motionless tongue, and collapsed onto the floor.

Air rushed back into my lungs in great waves of sweet relief. I spit wads of phlegm and blood onto the tile, my bloody hands trembling in my lap. I looked at the dead tongue and saw it was at least seven inches in length. Disgusted and horrified, I threw it into the toilet.

I don’t know how long I sat there gasping before I could get up.

I couldn’t stop spitting. I couldn’t stop thinking about how that thing had been growing inside of me, reaching up into my throat as if it tickle me.

I wiped the tears from my face and drew in a long trembling breath. 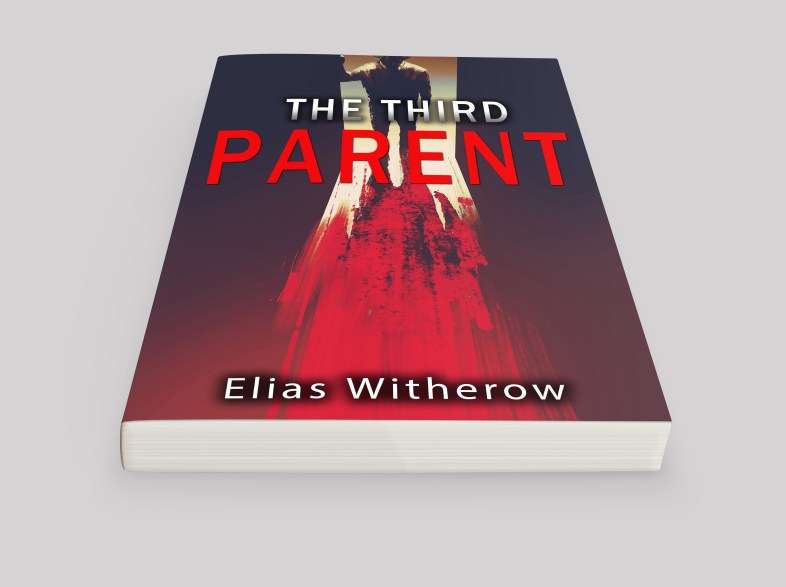 Elias is a prolific author of horror fiction. His books include The Third Parent, The Black Farm, Return to the Black Farm,and The Worst Kind of Monsters.

“Growing up reading the works of King, admiring the art of Geiger, and knowing fiends like Pinhead left me as a pretty jaded horror fan today. It takes a lot to get the breath to hitch in my throat and the hair on the back of my neck to stand on end.. My fiance is quite similar, so when he eagerly begged me to let him read me a short story about The Black Farm by Elias Witherow, I knew it had to be good… And I was not dissapointed. Elias has a way of painting a picture that you can feel with all your senses and plays the tunes of terror created when our world meets one much more dark and forces you to keep turning the pages hungry for more.” —C. Houser

Keep up with Elias on Amazon

The Farm is in ruins. The Pig has vanished. Everything Nick loves hangs in the balance unless he can find a way to make things right. But at what cost?

Plunge into the darkness with Return To The Black Farm, a new book by prolific horror author, Elias Witherow. Published by Thought Catalog Books.

The Farm is in ruins. The Pig has vanished. Everything Nick loves hangs in the balance unless he can find a way to make things right. But at what cost?

Plunge into the darkness with Return To The Black Farm, a new book by prolific horror author, Elias Witherow. Published by Thought Catalog Books.