Here are the 15 different types of men that women can barely handle for one second, let alone for a long-term relationship.

This one I particularly cannot stand:
• Whines when you don’t text back fast enough.
• Gets upset when you text back and say “K” or “Ok.”
• Takes it personally if you don’t agree with his opinion on something.
• Cries all the time.
• Doesn’t “even know what to say to you right now” or “can’t even look at you right now.”
• Claims that you had an attitude, were being mean, or were “yelling” over text. IMPOSSIBLE.

I don’t mind a sexy, fit, muscular guy. TO SOME EXTENT.
• Posts gym selfies every day.
• You can see the veins popping out of his body from a picture taken in a mirror at least 50 yards away from him.
• Looks like he rubs his body down with oil.
• Uses excessive amounts of gym lingo hashtags (i.e.; #swellfie, #swollerexic, #legday#backday#armday#shoulderday, #neverskiplegday).
• Is obsessed with the term “Do you even lift, Bro??”

There is nothing wrong with loving your mother. In fact, most women like to think that men who treat their mama with respect will also treat their woman well. But…
• Calls his mom when you get into an argument.
• His mom still pays for everything.
• He suggests that you take advice from his mother on how to cook, clean, and take care of him.
• Insists that you get along with his mother, or he can’t get along with you.
• Says he wants a woman just like his mom.
• Has to run to her every beck and call. (That should be what they do for us.)

No woman wants a man that could not help us if for some reason we were in a bind and asked for it.
• No job/never had a job.
• (See #3) Mom still pays for everything.
• Sits on the couch all day and plays video games.
• Has their woman supporting them financially.

Don’t get me wrong here. I know at some point in every female’s life we are attracted to the bad boys. But when it comes to long-term relationship material, you might want to rethink that one. This one I see to be a little more serious than the rest, and the red flags are severe.
• Constantly in and out of jail/prison.
• Can’t get a job due to criminal history.
• Has ANY—and I mean ANY—prior charges for domestic battery or anything involving him putting his hands on a female.
• Has multiple kids that he can’t/won’t take care of.
• Has multiple (and usually insane) “Baby Mamas.”
• His terms of endearment are: Bitch, Shawty, Li’l Mama, and/or anything that doesn’t make you feel like a WOMAN.
• Talks down to you.
• Uses and/or sells hard drugs.
• And this is my number one for bad boys: TELLS YOU THAT YOU WILL NEVER FIND ANOTHER MAN LIKE HIM, no one will ever love you the way they do, or they are the only ones that could put up with you.

This one should be a no-brainer, so instead, I will list signs that he may be cheating:
• Won’t take phone calls in front of you.
• Never wants to take you out with him (all guys need to go out with their buds, and vice-versa), but NEVER…?
• Doesn’t like to take you out in public anymore.
• You find random female items in your house/car that you know are not yours, i.e., panties, makeup, clothing, accessories.
• Has admitted to cheating in previous relationships. If he did it before, he will do it again. And with that statement I would like to add: If he cheated on his previous girlfriend with YOU and left her for YOU, what makes you think he won’t end up doing that to YOU? Oh, and YOU, by the way, are a homewrecker.

As women, we love the fact that our men could be so sweet as to consider our feelings and opinions by asking us how we feel about something or maybe even just what we want for dinner. But these guys take it to a new extreme.
• “Can I kiss you?”
• This one will take some elaboration, so bear with me: “Can we have sex?” Okay so, if you have been in a relationship for a while and you’re comfortable with each other, the fact that one day he might be like, “C’mon, lets go have sex” and pick you up and carry you off into the bedroom (or kitchen, wherever) is kinda sexy. However, I’m talking about the men that make it uncomfortable on the first couple nights together. Maybe you could be just sitting there getting to know each other, feeling each other out, and in the TOTAL WRONG MOMENT he says, “Can we please have sex?” or “Are you ready to do it yet?” or the worst, “Can we do it again yet?” I mean come on, don’t ask. DON’T ASK. Just let it freaking happen.
• Are you OK?
• Did I do a good job?
• Did you enjoy that?
• Are you sure?
• And of course, mid-pump, all of them at once. “Is this OK, are you enjoying it, do you like this, am I doing it right, do you want me to move…?” On and on and on. Stop. Just stop.

Sometimes we all love a little…authority if it can be handled in a sexy manner, but the last thing we want is someone to try to talk us into something we’d rather not do.
• Can’t let the moment carry out and happen, so he immediately tries to stick his hands down your pants.
• Makes you feel guilty every moment you’re not having sex with him.
• Threatens “I’m not going to wait forever.”
• Even with the first conversation you ever have, all he wants to talk about is sex.
• Doesn’t want to take you out, just wants to take you to his place. We all know what that means.

This happens to be the opposite extreme of #8.
• Can’t think for himself.
• Wants “Whatever you want, babe.”
• Won’t, under any circumstances, tell you “NO.”
• Won’t tell you that something is wrong when you ask him, but then gets mad because you didn’t know what was wrong. That’s a female thing; stop it and tell me what the hell I did to piss you off. Don’t be passive-aggressive.
• I know this one sounds awful, but he won’t participate in an argument. I’m talking about the men who cannot stand up for themselves and let their significant other walk all over them. Fight back, you bastard!

We all want to feel like someone needs us in their life, but these are some more cases of it being taken to the extreme.
• Won’t leave the house without you/won’t let you leave the house without him.
• If for some reason you’re able to escape, he calls you every ten minutes.
• Wants to know where you are every second of the day, even if you are at work.
• If you miss a phone call, you MUST be cheating.
• Doesn’t trust you—RED FLAG!!!!
• Doesn’t like your girlfriends.
• Wants to share a Facebook account or sit on the same side of the booth as you (because let’s face it, they are equivalent).

No one likes to be told what they’re going to do. Period.
• I don’t even need to place examples on this one. Please, stop telling us what we are GOING to do and sit down and have a discussion with us if there is something you don’t particularly like.

Relationships are supposed to be filled with trust, love, and happiness.
• Starts a fight over the smallest issues.
• Argues with any opinion you have that is not the same as his.
• Always has a bad or negative attitude regarding everything. Come on, make a positive comment for once.
• Cannot just sit down like a normal human being and talk things out like adults. It’s called COMPROMISING.
• Uses bad language or putdowns when he isn’t the happiest with you. Don’t patronize us!

Just…awkward.
• Doesn’t ever start the conversation.
• Replies with one-word answers when someone else starts it.
• Doesn’t laugh at any attempt of someone else making a joke.

No matter how old we get, we all still like to have fun, but at some point we have to grow up and be adults. I feel like this one is #1-#13 all rolled into one.
• Graduated from high school/college two years ago and still attends the parties that are thrown by the current students.
• Sleeps ’til 1:00 PM every day.
• Wakes up and smokes pot and eats until he falls back asleep again.
• Wakes back up and then attends the parties I mentioned.
• Anyone see a recurring pattern here, or is it just me?

And finally, last but MOST CERTAINLY not least…in fact, I might even give this the spot of being the number one contender:

If we didn’t reply the first two times, what makes you think we’re going to reply the tenth? 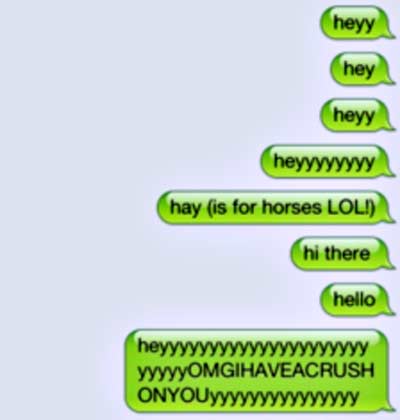