Hello again! The limo exit episode is always one of my favorites of the season. You get to see each contestant’s personality and judge them based on some hokey act the producer’s come up with to make an impression on the Bachelorette. Also, the very best drinking game for this episode is always “drink every time someone stares off into the distance.”

This year as the guys were piling into the house I had an errant thought about how it’s probably a little bit scary to be surrounded by 25 men who are competing with each other for your attention? Some guys go a little nuts when they deal with rejection and all of that in one room would make me uneasy. Sure enough, the focus of this episode seemed to be on the guys trying to out macho each other and the preview for the rest of the season shows that this gets bloody at some point. Men are so catty! Amirite?

Anyways, here is my detailed analysis of how far each contestant is likely to go this season:

But first, goodbye to our castoffs

Coley was always out of his league.

Can’t believe you ditch a hot architect in the first round Jojo.

Jonathan came in a kilt and said he wasn’t wearing any panties underneath. Which is kind of a lot when you’re just meeting someone. Goodbye to you and your awesome taste in books!

Maybe she got a peak at his contestant photograph and realized he wears neck scarfs.

Jojo does not want you to be her #mcm.

Sal looked good on paper but he let his whole entire first interaction with Jojo be about ball jokes. Women don’t like that!!

In the running to become Mr. Jojo

I honestly feel v v attacked and betrayed that Jojo kept this person around where I will be forced to look at him.

Brandon is too cool for The Bachelor and totally high rn. Get off my TV!

So, I really don’t understand how production works because I get keeping some characters around for drama, but we already have CHAD, why do we need Daniel? In any case it’s clear his obnoxious drunk ass is absolutely not making it to the end. Good luck with your lucrative career as a ‘Canadian’!

Vinny has zero chance with Jojo.

A little known fact about James S is that as soon as you get married to him he will move his mother into your house.

James F screams filler. He introduces himself in a sweet way (which is probably why he got a rose) but he’s just… definitely not lasting.

Christian shows up on a motorcycle and seems to make a good impression on Jojo.

Not sure if Grant has ever talked to a woman before (not sure he’s had to, dat face) but he introduces himself to Jojo by reminding her that Ben very recently broke her heart by falling in love with two women and “he won’t do that.” Okay? Is this negging? Are we being negged?

Alex doesn’t really say anything to Jojo other than that he’s nervous. He gets a long intro in the beginning, but that doesn’t always translate into going deep.

Wells is v cute in a way none of the other contestants are cute (not in a macho way, I guess). And he brought a cool 90’s rnb band, so that was cool.

I wanted to hate Ali but he was really sweet and articulate in real life. He has potential.

Will “drops” his little speech to Jojo in a forced not-very-funny limo exit, but he’s affable enough but Jojo does NOT like kissing him.

I’m being a bit unduley hard on James Taylor for how sweet he is and how much screen time he got, but he’s just so goofy and I don’t think Jojo is the kind of girl who goes for goofy — even if she appreciates it from afar.

The villain of this season!!! I didn’t put him all the way at the bottom because as we know from Vienna and Courtney, sometimes the villain wins. But wow, seems very unlikely. Maybe he will get some much needed therapy after he sees himself on camera.

“I mustache you a question”

“But I think I’ll shave it for later”

Derek gets out of the limo and gives Jojo a series of really meaningful compliments — he’s observed that she has a really good sense of self and she’s grounded. Not a bad way to make a first impression.

Robby gets out of the limo and introduces himself by opening a bottle of wine for him and Jojo to take a swig out of, sans glasses. The only way this would be more impressive is if he said it was for Jojo’s mom (the real MVP of last season).

Luke is super duper perfect for Jojo. They’re both from Texas, they’re both extremely hot, and they both believe in unicorns.

Just like last season was a big boring because we all knew from the first few weeks that Lauren B was going to be Ben’s final pick, I wonder if this season will be similarly boring because, how could you NOT pick Jordan? He’s super hot, he’s intelligent, he’s conscious of talking to Jojo and thinking about her needs and making her feel good. Wouldn’t hurt to have Olivia Munn as your SIL either.

burning question for this season

Who is Jojo making out with in this dark stairwell???

What about this dark corner???

Why do all the guys hate Jordan???

Is Chad a sociopath???

Does Robby have a secret girlfriend back home???

Will Jojo pull a Kaitlin???

What kind of talking to is Chris Harrison giving Chad???

Is this some kind of fight involving Evan and some guy that Jojo tries to break up???

Yooooooo who gets punched???

Why is Jojo having this cry-versation with the guys??? 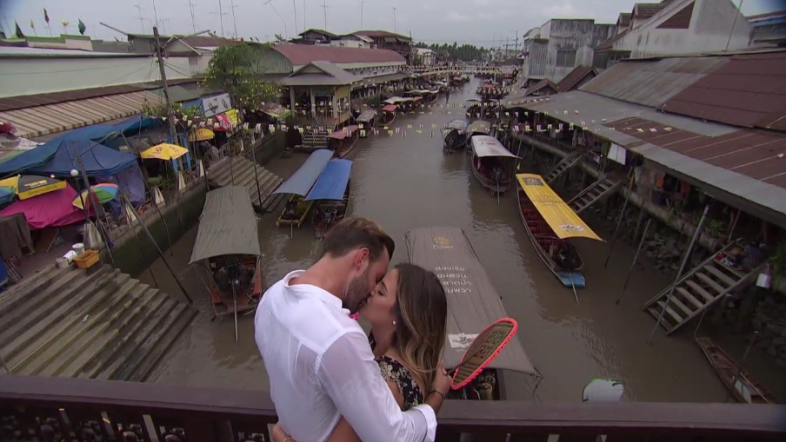