Hi everyone! This ~dRaMatIc~ season of The Bachelor came to a close last night when boring Ben proposed to boring Lauren B after two hours of really boring conversations about lOvE. Bachelor finales are only good if it’s somewhat up in the air who is going to win and it’s been obvious to everyone watching for weeks that the only logical outcome of this season is a Lauren B win. So now they are engaged and she is moving to Denver or some shit.

It was sad to see a dude pick the simple girl, like always, and there was no better time for this Snapchat filter to be going around? 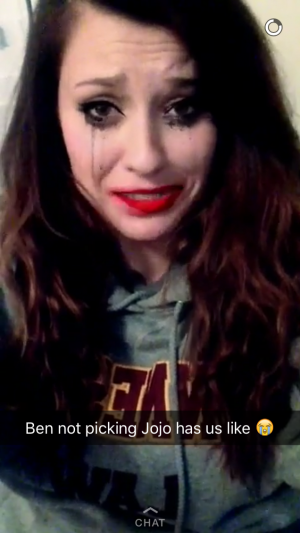 But in the end, Ben is going to be very happy with his fame.

Congrats, I guess. But if we are being honest, the real winner here is Jojo.

Not only does she not have to put up with Ben’s lame ass anymore, she gets to date 25 hot guys and grow her celebrity to the size where like, herbal teas will pay her to Instagram about how much she LOVES her tea time.

Here are all the reasons Jojo will be the best bachelorette we’ve seen in awhile:

Jojo WINS at her breakup with Ben

Ben and Lauren are supposed to be the star of the show, but all anyone wanted to talk about was how good Jojo look and how genuinely happy she seemed. Her attitude towards Ben is truly aspirational breakup chicness. Though, it doesn’t hurt that she knows she’s imminently on to bigger and better things:

JoJo seems to have the don't-worry-I-got-25-guys-comin-my-way glow to her. #TheBachelor #AfterTheFinalRose

In case you haven’t noticed, girl has dope style:

And on her Instagram, she breaks down where you can buy some of her outfits:

She is the older lady we all aspire to be.

We get to see more of the bash brothers

If there is a god in heaven, we will see a lot of Jojos dog

This dog is life.

Jojo and Becca have the cutest friendship ever

If Becca makes a guest appearance on next season, she might finally find a role on the show that suits her.

TBH the only bad thing about Jojo is that she once dated a guy named ‘Chad’.

The new season starts on May 23rd. See you then!

Is ‘To All The Boys I’ve Loved Before’ Getting A Sequel? An Investigation