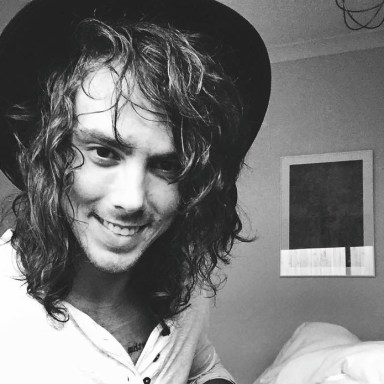 The sweetest song I ever heard played for me in the late hours of a warm autumn night. A comfortable silence broken only by the sounds of our breathing and a medley of insect wings and lightly crackling wax.

You laid beneath me, eyes weary with the weight of the day, while you spoke to me softly of deep hurts and past loves, your family, your fears, and all of the times you could not tell them apart.

And before long, through the narrow openings in your defences, I could suddenly see thousands of threads of dazzling light. One after the other, I pushed against them gently like old ivory keys on a grand piano and soon the most magnificent melody began to play, forming gradually from a cacophony of distorted white noise into one clear, harmonious symphony of sound.

Suddenly, every word from your lips became a sharp, crashing chord. And your disarming gaze thumped like a drum on the inside of my chest.

Every moment of vulnerability and low self-confidence in you carried the bittersweet resonance of a score of violins. And when the tears began to fall, they streamed delicately down both sides of your cheeks with the soft, sorrowful whisper of a solitary flute.

The birthmark on your belly was a bass guitar thrumming through every single bone in my body. And whenever you spoke, it was with such grace and thoughtfulness, I could swear I heard one hundred thousand cymbals clash together in triumph.

In the sound of your laughter, I could hear a musicians’s hands skillfully caress the silver strings of a harp. And concealed deep beneath your cautious guard lay the slow croon of a saxophone alone on the smoky stage of a dimly lit bar.

All of these differing tones, vibrations, and means of expression strung delicately together in one breathtaking performance—the design, the ensemble, the complete orchestra of your heart. And I couldn’t bring myself to look away for even a moment.

You—You were a song I knew. The sort of song you hear only once and know all the words to. The kind of song that moves you so deeply you can’t shake the strange feeling you have heard it somewhere before. Some time long ago or perhaps even somewhere inside yourself.

This was the song of who you are. Intricately layered and masterfully composed. This was a song that could silence a room. The kind of melody so captivating it creeps in softly through every last corner of your mind, consuming the empty spaces between every thought, demanding to be sung at the top of your lungs. The sort of song that sweetens the air around it. That saturates the energy and atmosphere of a room. That lifts the mood of everyone who hears it.

You are made of the music that inspires art, that can ease and mend a broken heart, and could move even the most shy and unsure of souls to step boldly into the centre of a room to dance.

My name is Beau Christopher Taplin and I am the author of Buried Light.

Even When Your Heart Is Broken, I Hope You Keep Believing In Love

I Still Wish We Were Together

All The Things I Wish I Could Tell You

If I Could Tell My 16-Year-Old Self Anything About Love, It Would Be This