Her name is Teddi. And yes, we often follow it up with, “Teddi with an I…get it, I. EYE?!?” And it gets a mere chuckle. Probably a “that was a terrible pun, but you tried so here’s a sympathy laugh.” Don’t know why we keep attempting material that clearly isn’t working, but alas. Teddi. The pup with one-eye stealing the hearts of everyone she meets.

She’s a bundle of happy and kisses. And based on how she lives her life, you’d never know she has a disability. She runs with the kind of energy you’d associate with someone who has never been hurt. Someone who has never seen the darker side of humanity. And maybe it’s because she’s a dog and they are naturally more forgiving creatures, but I look at her and marvel. She loves everything she sees. And she’d have every reason not to. She’d have every reason to shy away from human touch, to shrink, to lash out. But she doesn’t. She simply loves.

Teddi was the classic foster failure, meaning we brought her home with the intent to just foster her until we found her a permanent family. But look at her! Can you blame us? We fell in love so quickly that everyone knew the outcome. She bonded to our other animals so intensely that it seemed almost too perfect. She was meant to be with us. So that’s what we did. We made the adoption official. 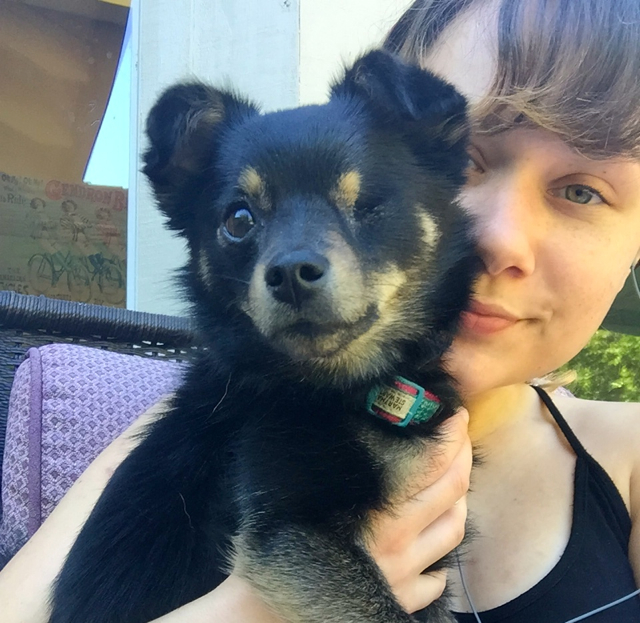 When we first brought her home from the shelter, it was following the eye removal surgery. We nursed her back to health, changed pretty nasty bandages, made sure she was getting the proper medication. We still don’t know the details (and I prefer it that way) but her eye was so massively infected from abuse that the only real option was removing it. I can’t let myself think about it too much because I get too upset. I look at this perfect pup and to think anyone hurt her, I just can’t go there. It makes me wanna find this person and throw forks at them and do a lot of bad things I shouldn’t think. And Teddi? If she could speak, I know what she’d say. She’d tell me to let it go. She’d say it’s in the past and she’s happy, healthy, and it all worked out. She’d kiss me and run off into the backyard, strangely coordinated for a dog missing an eye.

Humans aren’t as quick to forgive as some other animals. I’m not sure if this is to our detriment or a side effect of survival of the fittest. We’re not as quick to believe. We put up guards and move forward with caution. It makes sense. We’re afraid of being hurt. Of being hurt again. Of trusting in another who could so easily prove unworthy of trust.

Teddi could have every reason to be mad at the world. I know a lot of humans who are. But our traumas aren’t reason to keep us from living. That’s what I’ve learned watching Teddi. You could spend the rest of your days mourning the missing eye. Or you could celebrate still being able to see.