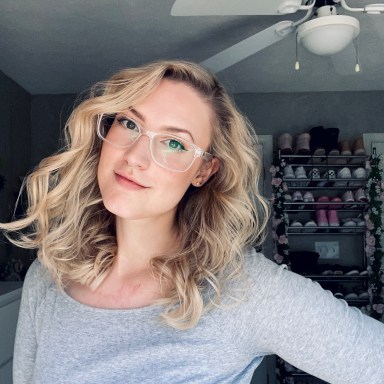 I used to hate my skin. My skin brought me nothing but physical pain and embarrassment. Trying to live a normal life as a young teenager is hard enough as it is but the universe had to also curse me with a very visible skin condition? Really? The loneliness I felt as a result of my condition made me feel like I was different, and I was. If someone who doesn’t have eczema sees someone who does, they’ll be confused or even scared because they don’t understand why your skin looks red and flaky and they’re worried you’re contagious or something. I was extremely aware of what my skin looked like at all times and that played a major part in how I felt about myself. I was ugly.

Turns out I was the only one who thought that. If you tell yourself something enough times you start to believe it. I told myself my scaly skin made me not beautiful… why did I ever believe that?

Now, I’m not here to tell you to get over it and accept yourself, but hey, maybe it’s not the worst idea. I know the road to self-acceptance is more complicated than that, but there’s no better day to start than today. I wasted entirely too much time being unkind to myself and it was exhausting. I wish I had realized sooner that what my skin looks like does not matter and that there are so many people who look like me. The issue is we, as people with eczema, think we’re weird and different because we think we’re alone in this. Our skin is different so that means we’re ugly by default, right? Wrong!

The reality is, 1 in 4 people have eczema. That’s pretty common. I understand we all have it at different severities, but even a tiny patch of eczema on your arm can make you want to wear long sleeves in the summer so no one has to see it. It might make you change your prom dress that you loved so much so your rashy skin doesn’t “ruin the photos.” I usually had eczema on my face and thought I had to cover it up with makeup (which only ended up making it worse). Isn’t that weird, though? Making yourself uncomfortable to make others comfortable? Why don’t we want others to see it anyways? What if achieving self-confidence really is as easy as waking up one day saying “actually, I’m beautiful and no one can tell me otherwise.” That’s basically what I decided to do (again, a lot more complicated than that, but you get my point) and it was the best decision I’ve made.

Like I said, if you tell yourself something enough times you begin to believe it, so instead of convincing myself I was gross, I began telling myself I am beautiful with my flares. I’m cute. I look good. I look damn good. Anyone who said differently was blind. But honestly? No one thought differently, even though I really thought they would. Turns out, everyone was worried about their own insecurities to even notice and I had let my inner saboteur convince me otherwise.

I felt free. I freed myself from the thoughts I was holding onto for so long. I decided my eczema wasn’t “weird” anymore and it was just a part of what I looked like. I started my Instagram account @eczemalove to post photos of myself with eczema totally unfiltered to show the world people look different, but that doesn’t mean it’s ugly. We need to normalize eczema. Lately the world has been catching on and I’ve been seeing so much representation of people that once never would have been on the cover of a magazine. Brands are using more models with different shapes, skipping the photoshop for the stretch marks, and showing what real people actually look like. Do you know how powerful it is for a young girl with vitiligo to see people who look like her presented in advertisements? Or a boy struggling with his body image seeing someone built just like him displayed on a billboard? I’d love to see a future where children see someone who has eczema and they never have to think that their skin is “weird” or “different,” it’s just skin, and not everyone’s looks the same.

It feels wonderful to know there are people who look like you and know exactly what you’re going through. Eczema is beautiful. I started to love the appearance of eczema flares under my eyes and would incorporate it into my makeup looks because it was something that made me unique. No more caked on foundation suffocating my rashes and making me itch more than I needed to. Why would I hide it now?

I’m here to let you know eczema does not have to dictate your life. Of course, there is so much more to atopic dermatitis than the appearance of it. The last thing I want is people thinking it’s just a rash. It is painful, it is unbearably itchy, and it does not let you sleep. By no means do I want to downplay how difficult living with eczema can be; however, I’ve found comfort in not letting the visual aspect of this skin condition affect my life. Wear what you want and have the mindset that your flares are your body art. Take those selfies even though you’re having a face flare, I promise you look wonderful. Take it from me, it is frustrating, it is uncomfortable, and it is extremely difficult to learn to accept. I have fully accepted who I am and what I look like, and now I love the skin I used to hate so much.

Alexis was formally diagnosed with atopic dermatitis around age 12. Years later, she created her eczema Instagram ...