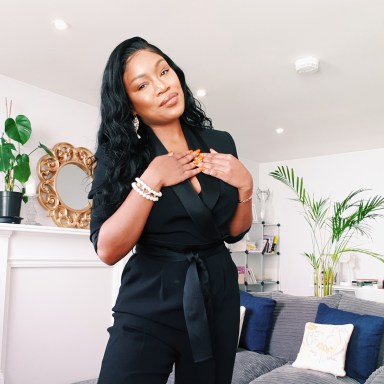 HIV did not stop me from living my life; it was the stigma associated with it that did. If anyone had told me ten years ago that one day I’d share with the world I’m HIV positive, I would have laughed in their face. But look at me now. I do this with a sense of glistening pride, thinking about how far I’ve come.

Today, I honor my mental health journey from the silent emptiness of inner desolation to unwavering self-love. To let women living in the shadows with HIV know that shame should not rule their lives. I want them to see that it’s possible to reclaim their self-worth and that they are still worthy of love. My story is for all women who dim their light for others.

It’s a beautiful thing to overcome your demons. To feel the feather lightness of not having to drag your demons into every space you occupy. There’s a liberation in being authentically you, which is priceless.

Believe it or not, acquiring HIV was not the worst thing to have happened to me. Sexual abuse and neglect as a child was. HIV was the straw that broke the camel’s bacon top of an already painful life of trauma.

Receiving bad news like this changes your life in a split second. It sends you spinning into an existential crisis. It short-circuits your mind, stopping you from thinking clearly. You cannot imagine the future because you feel that you no longer have one.

Though my doctor told me I’d live a normal life like everyone else, according to the stigma, I was now tainted for life by the dreaded HIV.

After the diagnosis, I plunged into a deep dark hole of depression that lasted for three years. Shame and loneliness ate me up inside, making me see the world in white and black instead of color. On my worst days, I’d ask myself, “why am I even here?”

I didn’t tell anyone outside of my immediate family and friends.

In all that time, I kept asking myself one question, “why me?”

I always thought this happened to other people, and it could never happen to me. I trusted a sexual partner, and this was my reward?

It felt like life raised her invisible fists and pounded me black and blue.

This question always led to more unanswerable questions. One evening something happened while watching a TV show called RuPaul’s Drag Race. It’s a reality show where contestants (primarily gay men and some trans women) perform in drag and compete against each other to win a prize. The contestants talk about their life stories and the hardships of being gay in an unwelcoming world. A few contestants have even come out as HIV positive. My heart sank hearing their pain.

Then the answer hit me like a herd of stampeding elephants running from a swarm of bees. “Why not me?” Seriously, why not? It’s not like the virus sits around a table with its friends, deciding who it will infect next. It could happen to anyone. That was the honest answer.

At that moment, almost four years of shame and loneliness lifted out of my body and whooshed into thin air. “Was I still me? Yes, I was.” “Would my HIV-positive status limit my life? No, it wouldn’t.” Thanks to modern medicine and AIDS activists before me, fighting for a cure.

The truth was it was only the stigma that affected me. I was basing my identity on outdated ignorance. “AIDS” has been weaponized as a tool of hatred, dehumanizing those living with HIV. I had to change my mindset; otherwise, prejudice would win.

Being HIV positive has been my greatest teacher. I now know that HIV is a virus that can affect anyone, and it’s no longer a death sentence. I’ve learnt that prejudice is a state of mind and can change if people are willing to learn and become educated about this disease. I’ve learnt empathy and a better appreciation for the experiences of others. This disease has moulded me into an educator, a poster child, and a survivor of prejudice.

Updating the narrative of HIV is important. I want people to know that a person on treatment cannot pass the virus on to anyone else. Also, with symptoms managed you, can lead a healthy life.

The importance of representation

I wish more straight women with HIV would come out and help spread awareness, as representation for people like me is entirely lacking. Not only that, it would help people across the world to feel less shame and get tested. Silence is complicit in so many things that are wrong with the world.

Luckily, I do have a prominent role model in Magic Johnson. He is one of my inspirations as he helped to dispel the myth that HIV was only a gay disease. He has gone on to live a successful life as a businessman and philanthropist after retiring from basketball. He also champions his gay son.

As a cis straight woman living with HIV, representation would be a wish come true as there are none. So, here I am, tired of waiting for that to happen. Instead, I’m embodying the change I’d like to see in the world. I do this to be of service to women living with HIV, afraid to say it aloud. There is life after diagnosis, and it can be happy and long. I now know that no one has the right to shame you out of sharing your truth. You can have HIV-negative children. You can date and find love.

I’ve found that adversity can be your greatest teacher when you are ready to learn. Today, I am happier than ever. I work as a self-love coach, teaching women to love and accept their deepest wounds and embrace their scars. I enjoy helping them become the heroine of their stories.

Alana Beaumont is a 36-year-old self-love coach and HIV awareness
advocate living in the UK. She has been HIV ...