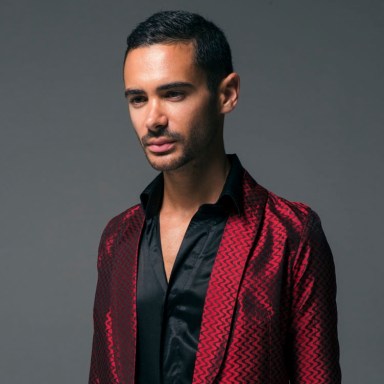 I have a paranoid, obsessive fear of STDs. One time, I was convinced that I had HIV because I had a cold and peed red, forgetting that I drank a beet juice earlier in the morning and it had changed the tincture of my urine. This fear is somewhat irrational considering I have never in my life had unprotected penetrative sex, but nonetheless, the risk is ever there — the possibility of a broken condom, the infinitesimal chance of oral contraction, hell, even an unlucky mosquito bite.

The first time I had to deal directly with the disease was during the early stages of dating an older, successful filmmaker. We had gone out a few times, and finally made it into his bed one evening after I brought over a bottle of Macallan. We went down on each other; I came and he didn’t. We saw one another a few more times after that and I got a sense that he was not invested. I worked up the courage one evening to call and ask him why, and in the outpouring of reasons, one of them he mentioned was that he was HIV-positive. I was momentarily speechless. How could this man who looks completely normal, if not actually better than most men his age, who has a successful career and a multimillion-dollar house have HIV? I wondered naively. But more unthinkable still — why had he waited this long to tell me?

He told me that he was “undetectable,” meaning that he was on medication which controlled the virus so that the risk of passing the infection was around 1% (depending on which studies you read). I had been relatively ignorant about HIV, figuring that it was a disease that affected other people and not me, because I always use protection and tend to avoid the kind of people who look like they get as much action as the In-N-Out drive through.

My last blood test, I waited anxiously for the results. When the doctor called a week later, he went through the banal details of my bodily health: excellent cholesterol, great heart rate, average white blood cell count. “I don’t have HIV, right?” I interjected, exasperated and unable to wait any longer. “No, you don’t have HIV,” he replied. The confirmation always gives me immense relief, confirming what should logically be true anyway.

HIV wasn’t particularly on my mind last week when I was in New York and I met up with a handsome guy who looked like a cross between Alexander Skarsgaard and Mick Jagger, with a smile like a young Jack Nicholson. I have a taste for variety and figured that he didn’t really look like anyone I’d slept with before. We sat next to one another on a bench in the back of dark bar. He hadn’t finished his can of Modelo before he started touching me. He was handsome, charming, and I had nothing (or no one) better to do that evening.

He led me to his apartment a block away, stopping to kiss me in the street. Once upstairs, we removed each other’s clothes. At some point, either despite or because I had been drinking earlier with dinner, I asked him if he had HIV. He paused. “Yeah, do you?”

“No, I’m negative,” I said, with some defensiveness in my voice, as in how could you even ask in the affirmative. “I’m not having sex with you without a condom. I never have unprotected sex,” I added, which upon retrospect probably sounded patronizing. “Are you on medication?”

He mentioned Truvada, and a few others I hadn’t heard of. “So you’re undetectable?” I asked, remembering the phrase that the filmmaker had used. He said yes.

The questioning had created an uncomfortable interlude in our activities and I kissed him, somewhat out of pity, somewhat because of what it would have meant if I had just stopped and got up to leave. My physical attraction to him had not diminished, but in the back of my mind I pictured his body as poison, something deadly to be feared and handled with caution.

Afterwards we laid together on his bed. “I have a question, which you’re by no means obligated to answer,” I prefaced. “What?” he responded. “How did you get HIV?”

“I bottomed for a guy when I was 19. It was the first time I had sex and we used a condom. But I got it anyway.” The story broke my heart, the sheer randomness and unluckiness of the situation, like getting struck by lightning the first time you go outside in an thunderstorm.

“It’s sort of ironic,” he said. “It’s safer to be with someone like me, who knows their status and is on medication than someone who doesn’t.” My thought was that it was the most safe not to expose yourself to anyone who has HIV in the first place, but that seems both idealistic and possibly discriminatory — IF indeed their virus is controlled and protective measures are taken.

The point is that while he was honest in sharing his status, though not exactly forthcoming, there are many who are not, or who don’t even know they’re carriers. It seems then that the only safe method to protect yourself is to assume that everyone could have HIV, and to never trust anyone without a doctor’s note and a box of rubbers. No balloon, no party.

Adrien Field is a spiritual playboy. He is the founder of Tibetan Socks, a socially responsible line of hand knit ...