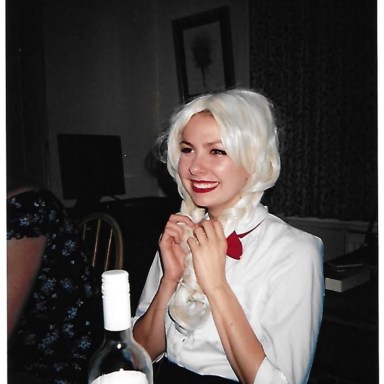 Here’s the issue with being a bisexual or a lesbian woman: it’s very hard to tell if another woman is interested in you, or even gay at all. Most of our pop culture is focused on interpreting heterosexual signs between men and women, like a lot of arm-touching or direct eye contact. Far less is on how to tell if women like you if you’re a woman to begin with, or how to learn to interpret those signs as romantic interest rather than casual friendship.

As a useless bisexual who has been very clueless on more than one occasion, here are the signs that — in hindsight — were glaringly obvious that a queer woman might be into you.

1. She is wearing Pride paraphernalia.

Often the biggest hurdle in finding other bi or lesbian women is that you’re presumed straight until proven otherwise, and sometimes even then. Especially if they’ve dated men in the past, which is the case for a lot of queer women, most of their social circles will assume they’re 100% straight.

If your potential crush presents stereotypically straight (no plaid, long hair, maybe ex-boyfriends) but is decked head-to-toe in rainbows whenever she runs into you, it’s probable that she wants you to be crystal clear on the fact that she’s gay. There’s a reason for that.

2. She talks about being queer around you.

This is another common tell — trying to casually work in the fact that she’s gay in conversation. Again, with a lot of women who don’t meet the stereotype of “butch lesbian” we see in most pop culture, the primary concern is letting you know they’re not straight.

If she manages to drop in several conversations with you the fact that she’s queer in any way, it may be a subtle indication that you could consider her as a potential match — if you’re interested.

3. She tries to find out your sexual orientation.

Once she’s established that you’re pretty sure you know she’s gay, she’s then going to try to subtly work out whether or not you’re gay. I really can’t stress enough how hard this is — even though I know now I’m bi, I still look like what our society would consider extremely heterosexual, especially with my male cisgender partner on my arm.

It’s hard to get someone to reveal their sexuality to you without being prying, so this will be a pretty subtle sign. But if she’s asking about your weekend plans, questions about any partner you might have, digging into your history, it might be because she’s trying to work out if you’re gay or not.

4. She drops compliments on you nonstop.

This tell is hard to parse because as women, a lot of us are socialized to read excessive compliments as simple friendship or jealousy. Sophia, one of my coworkers a few years back, was into me — every day started off with her lavishing me with a compliment on me.

I believed myself to be straight at the time, so I didn’t have the slightest inkling that Sophia wasn’t really obsessed about every inch of my hair, skin, and clothes — she was obsessed with me. I brightly thanked her for every compliment and issued one in return, as per the societal conventions, and continued about my life blithely unaware of her interest. Instead, I secretly suspected she hated me. Why else would a woman spend so much time saying nice things about the way I looked?

Let me save you the pain and confusion I experienced when she then tried to kiss me later at the office holiday party: if a woman is complimenting you nonstop, take one minute out of your day to think about whether it might not be because she hates you, but because she’s into you.

5. She finds excuses to touch you.

This is one sign that’s the same no matter what the gender of your potential love interest. The issue here is one of perception. If a woman touches you casually, you might think it’s friendship. Very good, very close friendship, but friendship nonetheless. It’s really hard to flip that switch in your brain to see the gesture as romantic — especially if you’re still getting to grips with your own sexuality.

If a woman is constantly peppering you with little touches — brushing your arm, grabbing your knee, snagging your hand, or smoothing your hair — she like likes you, no matter what gender you are. Touching someone is an intimate thing to do, and it’s a fairly universal tell of romantic interest.

The hardest thing to do if you’re a non-straight woman is to understand that it is romantic. I spent months convincing myself that my friend was doing friendly hip-checks and friendly butt slaps and friendly hand grabs. It was more than friendly, and I wish I had picked up on it at the time.

How do you know if a queer woman is into you, another queer woman? Typically, the pattern will follow that she’ll establish her own sexuality, she’ll try to suss out yours, and then she’ll lay it on pretty thick. When you’re a bisexual woman, at least, it’s hard to cut through the years of pre-programmed heterosexuality. The challenges are that unless you’ve proven yourself gay, you’re assumed straight; that there isn’t really a recognized “look” for bisexual women; and that even extremely romantic actions can be read as friendly, jealous, or any other non-romantic emotion.

Sometimes, the challenge isn’t in recognizing flirty behavior, but rather identifying your own feelings about it. I tamped mine down for years unknowingly because I was so convinced I was straight. I wish I’d been able to recognize some of these signs a bit more readily, just so I could find out how I felt about it. Looking over this list, I have to admit I’ve done a few of these to women I was attracted to without even realizing it.

If you’re noticing some of these in a friend or coworker — or even yourself — take a second and evaluate your feelings on the matter. You don’t have to come out, and you don’t have to reciprocate any feelings, but if you do, you owe it to yourself to at least think about your emotions. The worst that can happen is you decide you’re happily straight, or maybe you talk to the lady in question and realize you’ve misread the signs. The best-case scenario is that you get to understand a new part of yourself and bring a lot of potential happiness into your life.

It’s hard for bisexual women on both the giving and receiving end of romance. It’s hard to recognize, it’s hard to understand, and it’s hard to communicate. This list, while not exhaustive, should make it a little easier to pick up on the subtle and not-so-subtle cues, from one queer lady to another, that she’s into you.