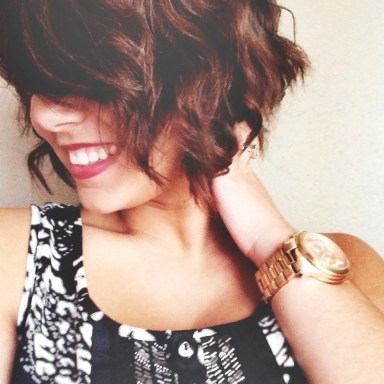 A couple of months ago, something inside of me shifted. I had been in a relationship for a couple of years with someone who was an incredible friend, but he was a not-so-great boyfriend. The moment the shift happened, my entire thought process changed. I had let many not-so-great things slide, but this particular one struck me differently. The situation itself is fairly irrelevant in the grand scheme of things, but it allowed me to finally see what was going on: I was settling. And not only was I settling, I was losing who I was in the process. I was giving up things that I knew rang true for me at my core because of someone else who refused to compromise—at all. I found myself in yet another situation where I had fallen in love with someone’s potential and not the actual person in front of me. My friends called me a fixer, a mom, a serial monogamist. There was something I refused to acknowledge that everyone around me knew: you can’t help anyone until you help yourself.

I had a tendency of enveloping men who were at certain extremes of the emotional spectrum because I had more than enough love to give him and our future of four kids (one adopted). This was all an illusion that I would use to quell the burning in my belly which was telling me each time I rolled over… I knew he wasn’t with me. He was there in the physical sense: our legs were intertwined and his arm was half under the pillow where I was laying. But he wasn’t actually with me. It’s the age-old dream of a man becoming this passionate being of light and love and sensuality just because of little old me being in the world.

When someone cares for you, and I mean truly cares for you, you don’t have to ask over and over again for what you need. Disclaimer: no one can read your mind. You have to be vocal about your wants and needs and then you can form healthy patterns in which the other person realizes you want/need certain things at certain times. The ones who care will show up over and over again and will make good on promises made. Again, disclaimer: no one is perfect. People make mistakes. But when careless mistakes are made more often than not, something is off. I used to always think that relationships and friendships had to be hard. I had to fight tooth and nail for every glorious moment just so I could savor it and finally deserve it. The aforementioned statement is untrue. Yes, things get messy and love isn’t always magical and friendships aren’t always fulfilling… but it is and they are. I had to help myself see exactly what I wanted and how I wanted to be treated. Not even that so much as I just needed to see me—as a vessel of creation, as a businesswoman, and as a human being.

I turn 26 years old this year. My brain (should have) officially stopped developing and I should be the person I am actually meant to be in the world. This doesn’t mean I won’t continue to grow and change. This means that these core values and the intricacies of my being should be rooted in the key elements I want to have in my life: family, adventure, health, passionate love, culture, education. Everything from this point forward will stem from these elements. Remember all of that love I tried to give him and those four kids that I mentioned earlier? I’m giving it to me. I’m pouring all of that love into my cup. If it is meant for me, it will come. If it is not, it will pass.

Move deliberately. Be unrelenting in what you allow and forbid. Pay attention. And, above all else, stay true to yourself.

Zana is a human palette cleanser. She lives in Atlanta and spends her free time scarfing down tacos, reading vampire smut, and dreaming about the day she’ll finally be able to decide on something.