As the clock wound down in the fourth quarter, I began to feel emotional. I had never watched a team I rooted for go all the way to the championship and win it. After all, I’m from Cleveland—we have the longest professional sports championship drought in America. And I love Columbus—my parents went to Ohio State. If I didn’t end up going to school in New York City, I’d be there.

I went down to Columbus to watch the game with some friends who went to OSU. The entire game, we screamed at the TV, pulled our hair out, and shrieked “Fuck!” every time Oregon gained yardage. But as the minutes approached zero, OSU held onto its fifteen-point-lead. It was clear. It was over. I scrambled upstairs to grab my coat. My friends and I began to jump around, grabbing onto each other’s shoulders. A vague, ominous roar began outside, like the rumbling of a prehistoric beast awakened from its thousand-year slumber. “Take to the streets!”Someone said.

We ran out the front door. Students from neighboring houses streamed out of their houses to join the madness. People were screaming, embracing, rolling around in the snow. We heard gunshots in the distance (this was later confirmed by news reports). Sirens started to go off. Smoke was in the air.

We ran towards campus, as the roar coming from it grew louder and louder. We passed an intersection and saw, down the street, what looked like someone’s porch on fire. We ran towards the flame. Frat bros danced around the fire, holding hands, tilting their heads back, screaming in primal ecstasy. They sounded like a pack of dogs shrieking over a blood kill. “USA! USA!” They chanted, as they poured gasoline on the fire. The fire roared in response, and the bros roared back.

Eventually the police and fire engines showed up. The crowd ran, and resumed its bloodthirsty rampage towards campus, growing crazier and more frantic. There were fires everywhere (89 were confirmed in the news reports the day after). There were sofas burning in the middle of the street, cars swerving to avoid them. A guy in front of us, alone and drunk, screamed “Does anyone know me!” Nobody answered. He smashed his bottle against a car window. The crowd cheered. He kicked over a trash can.

Smoke poured down the street, the remnants of forcibly extinguished fires and newly lit ones. It became hard to breathe. The madness reminded me of a post-apocalytic warzone, or a scene from the movie “The Purge.” 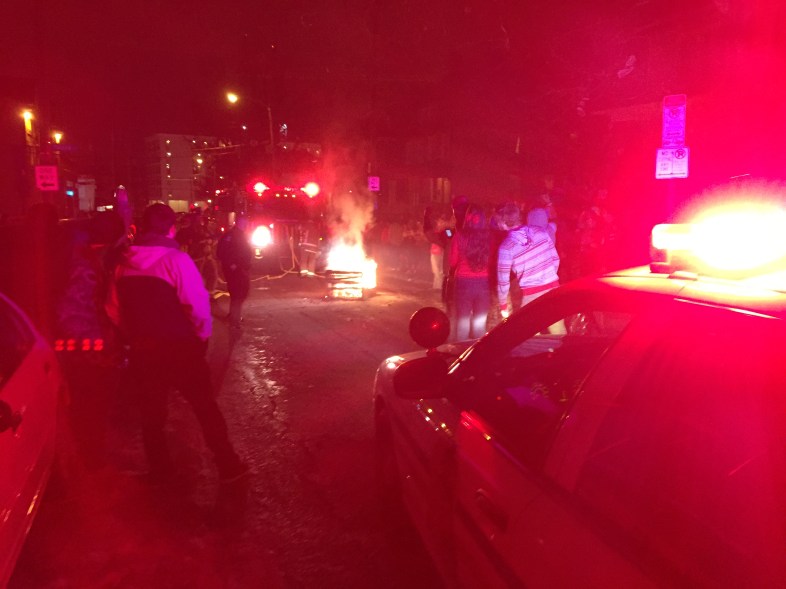 We joined in the mob of people going to Mirror Lake, the aquatic center of OSU’s campus. We made our way there. There was a whole crowd of people standing around the frozen lake. Nobody wanted to be the idiot that fell in. Finally someone slid across it. “It’s going to crack!” My friend said. But it didn’t, and soon everyone, including my friends, started to run across it. Couples were kissing, friends were taking pictures. It was an odd moment of peace and beauty in such an intense night.

Then someone spotted some ducks, the mascot animal of Oregon, the team we had just beaten, on the edge of the lake. “Kill the ducks!” Someone screamed. That got the crowd’s attention. “Yes, kill the ducks!” They started to excitedly yell. “Gut them!” Someone shrieked wildly. A couple of dudes started to drunkenly move towards them. They slipped and fell. The ducks waddled away. 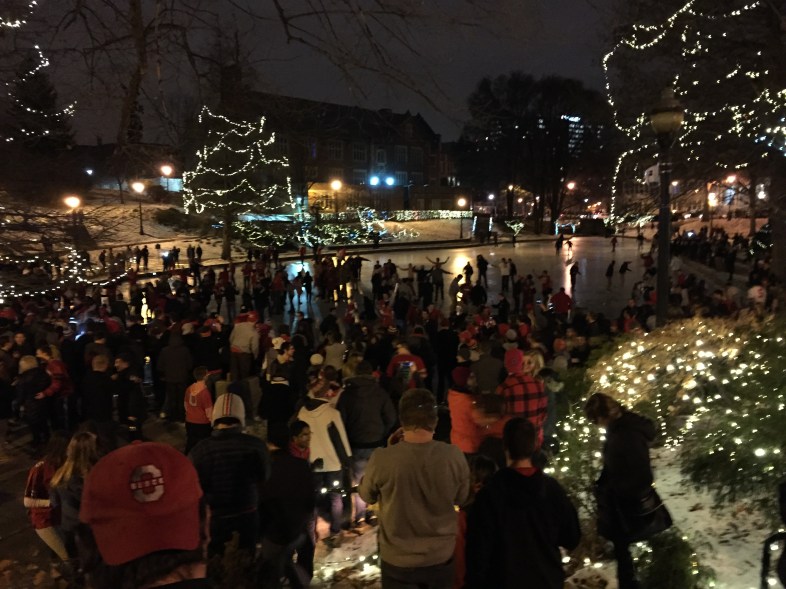 Water started to show through the ice. My friends and I decided it would be a good time to get out of there, before the whole thing collapsed. We started to move to High Street, the main artery of OSU’s campus, where we heard everyone was going. On the way there, I saw a girl sobbing, by herself, sitting on steps. I saw a man whooping, screaming “We fucked Oregon! We fucked them in the ass!” And I heard random, idiosyncratic shouts of “America!” in all the noise.

High Street was clogged with police, bumper-to-bumper on the entire street. Students were relegated to the sidewalk, where two lines had formed of people giving high-fives to each other. In a clearing, the crowd grew larger and larger. Students started to climb on fences. I looked around me. The orgiastic frenzy grew more and more frenetic. These people were crazy. We had beat the other team! Killed those fuckers! Eyes were rolling to the back of heads. People were shaking like they were possessed, foaming at the mouth, beating their chests, screaming like banshees.

All of a sudden, people pointed towards the back of the crowd. We all turned around. From the mist, a platoon of officers, fully armored, guns in hand, with horses at the rear, walked slowly towards us. There was confusion and amusement at first, then suddenly a wide-eyed realization of what was going on. “Pepper spray!” Someone yelled. The mist hit us full-on. The crowd started to scream and gag and disperse.

I, along with a couple of other photographers, stood there for a second. I needed my picture. My eyes, my nose, every sensation was on fire. The photographers in front of me collapsed and ran, succumbing to the hurricane. I stood there. I snapped my picture. And then I ran for my fucking life.

I couldn’t breathe, I couldn’t see. Nothing else was in my mind but my animalistic instinct to escape. “Breathe through your nose!” Someone yelled. “Fuck the pigs!” “Fuck the police!”

Finally I had gotten far enough away, but the impact of the pepper spray was felt. It had certainly been a buzzkill on the night. I met back up with my friends. Tired, exhausted, and still gagging from the pepper spray, we decided to conclude the night. We walked back, passing some store windows that had been smashed. We made our way back to the house and took off our coats. For the rest of the night, we relived, with bright-eyed fervor, the night’s crazy events.

That’s true, and that’s fucked up. The kids in Columbus weren’t motivated by social injustice. But they weren’t motivated by evil otherwise. It was just a night of ignorant-ass chaos. Sometimes, it just feels good to cause—or at least be a part of—chaos. The anthropologist Max Gluckman characterized such scenes as “rituals of rebellion,” cathartic moments that society must experience, from time to time, to dispel its built-up social tension. When I was younger, my friends and I would destroy basements at house parties and light fires for fun. Maybe it’s a stupid testosterone thing, but hey. It was interesting to participate in a sacred sports experience, to experience America in the raw flesh.

Read this: 10 Common Problems Old Souls Experience At Least Once In Their Life
Read this: Ladies, Please Stop Doing This On Instagram
Read this: 6 Facebook Statuses That Need To Stop Right Now

Be sure to check us out on Vine! Follow us here.

Everyone Thought Maddie Was Dead, But I Finally Know The Truth