It’s not settling for picking us off one by one anymore. God damn it. God fucking damn it. It’s trying to kill us all and those idiots won’t even admit what they know!

About an hour ago, we were all still in the cafeteria. Still quiet and fucking terrified. Leroy was sitting by Denis, who was one of the few of us asleep. He couldn’t take being awake anymore. Denis was sitting, leaned up against a wall with his head back as he snored. Nobody noticed when Leroy fell asleep, or exactly when Denis stood up. At some point, he was up and laughing under his breath, while his eyes were closed. Leroy was slumped over by his feet, completely passed out.

Bill: “Wait. Where are you going? Wait!”

Denis started walking forward. Bill and I were on him. Bill gave him one of those open palm smacks to the face. Only, Denis didn’t wake up, but he did start to scream. He threw out a quick backhand to Bill’s neck. Bill doubled over and started grasping at his throat. Denis kept screaming and thrashing as he came at me. His eyes shot open and they were just like Doug’s when he’d flipped. Pale and rolled up in his head. Fucking chilled me to the bones. I put a solid right into Denis’ jaw. The screaming stopped in a slurred mumble and his white eyes drooped low. His knees started to buckle, but then he sprang right back into horrifying action. His lifeless eyes widened and he started screaming again. Caught me off guard, and all I could do is go for his waist and try to keep him from making a run for it. Ed and two other men rushed over to help. I glanced over at Doug, expecting the madness to be contagious and somehow cause him to relapse into his violent state. He just sat there, happily drooling on himself as he watched us try to subdue Denis. It didn’t make any damn sense. Denis is about my build, which isn’t tiny, but he’s not Doug’s size. The four of us should’ve had no problem putting him down, but we could barely hold him there. Ed put a right cross into his jaw. Denis just started crying and screaming louder. He was scratching and punching us like a god damn animal. Finally, he just stopped. He slumped over on top of me and one of the other men. I looked up and saw the Doc pulling the syringe out of Denis’ arm.

Doc: “Sorry that took me so long. I had to run back and get my last two vials.”

We set Denis down on top of one of the tables. The Doc went over to Bill who was just starting to catch his breath.

Me: “It’s getting worse. Whatever’s out there, it’s getting desperate.”

Pete spoke up from the middle of the cafeteria. He’d been sitting there the entire time, watching us struggle with Denis. Not giving a shit.

Pete: “There’s not a fucking thing out there.”

Bill stood up and marched over to Pete quickly. He grabbed him by the collar and yanked him out of his chair. Pete shoved Bill away.

Pete: “Don’t you fucking touch me!” 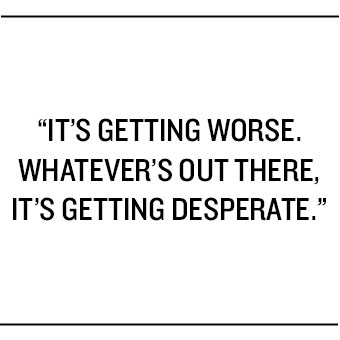 Bill: “You keep calling us liars and I’m gonna’ beat the living shit out of you! There’s something in the ocean. It’s giving us these god damn dreams so it can take us all one by one! I fucking saw it kill Stanley! The Doc and Jake saw it too.”

There were a few low murmurs around the room. The Doc turned and looked out a window, but I backed Bill up.

Me: “He’s right. I’ve seen it three times now. A light. A blue light in the water. It’s always there when one of us… when it takes one of us.”

The men gave me disturbed and worried looks. I couldn’t tell if they were worried because they believed me or because they pitied me for how crazy I’d become. Pete however, had a different outlook on my opinion. He spat by mine and Bill’s boots.

Pete: “Do you pussies even hear yourselves?”

Bill had had enough. He shot a lightning fast jab right across Pete’s cheek. It whipped Pete’s head to the side and back again, then his whole face turned red with anger. He leapt for Bill and tackled him onto a table and over it. Bill got on top of him and put a couple more decent shots into Pete before we pulled them away from each other.

Bill: “You cocksucker! You’re making shit worse while men are getting killed!”

Pete: “It’s a fucking disease, you moron! All we have to do…”

Just then, we were all rocked to one side. Everyone either fell over or crashed into something. There was a loud rumbling sound echoing up from deep in the spar. I’d never heard such a scary fucking sound. It lasted for a good 10 seconds, with smaller piercing sounds vibrating through the metal of the whole rig. The entire rig shook with the rumble. Once it settled, we all slowly got back up.

Ed: “Oh god. That sounded like the mooring lines.”

Pete: “It sounded like a lot more than the mooring lines. Goddamn it. No fucking way we’re making a profit on this quarter.”

Pete pulled out a small metal flask from within his jacket. He took a quick swig and put it back. I wanted to deck him myself, but I was more concerned with the matters at hand.

Ed: “We need to survey the damage and reattach the lines if they were disconnected. We won’t last long in this storm without the mooring lines. Goddamn it, Brookes was our sub pilot!”

The Doc walked away from the sedated Denis and towards us.

Doc: “I can drive it. I’ve never driven that model before, but I don’t think it’ll be a problem.”

Me: “You’re fucking joking, right? It’s that thing! It’s down there, and it’s pissed!”

Ed and the Doc ignored me.

Ed: “We’ll still need an engineer to go with him.”

Not a single hand went up. No one heroically stepped forward. There were about half a dozen men in the room with the right kind of knowledge to help, and yet none of them said a word or moved a muscle. It didn’t take long for Pete to spit and step up.

Pete: “I’ll do it. Haven’t been in a sub for a decade, but I know this rig just as well as Ed, if not better.”

Ed didn’t say anything. The Doc nodded and he and Pete started to head out of the room. I stopped Doc Tyler.

Me: “You’re not serious, are you Doc? You were there with us. You saw it.”

Doc: “I didn’t see shit, Jake. Just another man dying. If we don’t want the rest of these men to die too, I have to go down there and try to keep this fucking place afloat.”

Me: “And with that asshole, Pete?”

We both looked at Pete. He was taking another swig of the flask and he gave me the finger. The Doc turned back and just shrugged.

Doc: “Unless you have a masters in deep sea structural engineering, I’m otherwise out of options.”

And with that, the two idiots headed off to get ready for the descent. Pete is one thing, but Tyler has to know what’s down there. He’s going into the cold black waters in a ten foot long tin can with whatever’s been doing all this. The crazy son of a bitch is just giving himself to it, and that’s while he’s awake. I had to get all this down before we head to the communications room. Pete said they never could get long range communications working, but we could still connect to the sub’s radio from in there. The Doc told us he wanted to get a few things in order before we left. Ed and Bill are going to the radio room while the Doc, Pete, and I head for the sub. It has to be manually released. Once they’re ready, I drop them and head to the comms room. It’s a crazy fucking idea. I’m just glad I’m not going into the water.