I was on my lawn again. The perfect day playing out all around me just like always. I felt so relieved and at ease. I knew a weight had been lifted off my shoulders, I just didn’t know what it was. I didn’t care. I walked through my front yard and over the sandy dune to my pier. The ringing bells became more present with each step forward. Like the setting sun was playing my theme song while I approached it. The soles of my feet started to tap along the first planks of wood nestled in the sand. I smiled and started to trot down the pier. I wanted to jump in the water before the sun set. I was going to plunge right into the reflection of the sun on the waves. Like I was jumping into the big burning star itself. I picked up the pace the closer I got to the end of the pier. Right before I sprang into a jump, I felt something catch the back of my shirt.

The sunshine and the beach was instantly replaced by a thunderstorm and the sight of 40 feet waves crashing below. I was hanging over the edge of the helipad. The ocean was 250 feett directly below me. For a moment, I saw that light. The same blue light that took Henry. It was dancing sporadically some depth below the crashing waves. Before I could get a decent look, I was yanked back over the edge and onto the floor. I fell half onto Bill and he let out a grunt. The rain and the wind beat down on us and I was just starting to realize where I was.

Bill: “What the fuck is wrong with you?”

Bill: “You’re a dick. If you fucking kill yourself, who’s going to keep me from falling on a knife when I try to sleep?” 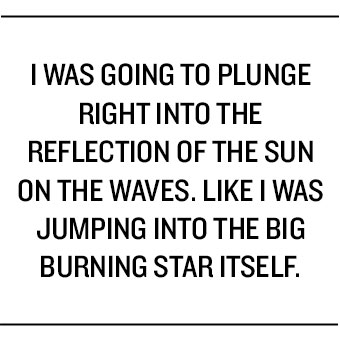 He and I stared at each other, rain pouring down our faces. Then we both smiled. Fucking Bill. All this shit happening and he can still make me laugh. We pushed up and sat there for just a moment. Somehow, we both didn’t seem to notice the raging storm all around us. We just stared into the rain and the black sky.

Me: “It doesn’t want us to kill ourselves. It wants us in the fucking water with it.”

After another couple seconds we got up and went back inside. A few of the guys were already awake from whatever racket I must’ve made running into the storm. I felt like an idiot, but I was getting empathetic looks from restless faces. Everyone was having dreams. We started gathering in the cafeteria as morning broke. Not like you could tell from looking out a window. It was completely overcast as the winds and rain beat against the rig constantly.

Once Doc Tyler and Ed showed up, we all got to talking. Ed mentioned his dream and so did Bill. Ed was with his ex-wife and kids. They were all happy together and playing on the beach. Ed would wake up just as he was chasing his kids towards the water, smiling and laughing the whole way. Bill talked about following a beautiful girl he’d dated once along the beach at night. He was stumbling behind her drunk, and the closer they walked to the water, the more clothes she’d take off. He was always just about to seal the deal when he’d wake up. The Doc didn’t talk about his dream, but he nodded as we all spoke about ours.

Me: “Whatever killed Henry and fucked up Doug and Stanley is starting to effect all of us.”

Ed: “Look. I admit, we’re all suffering from some pretty odd dreams, but that has nothing to do with those poor boys.”

Me: “You’re just going to stand there and tell me you don’t see what’s happening? We’re all having the dreams. We’re all acting a little off. Except for those of us who’ve tried to fucking kill ourselves. We’re all more than a little off!”

I started getting loud and pissed. This time, it was Bill who put his hand on my shoulder.

Ed: “Maybe you’ve got a point. Is it a disease? Something messing with our brains?”

Doc: “Maybe. It moved incredibly quick for that, though. We all started showing the symptoms about the same time. Viruses don’t spread that fast, unless they’re airborne. Maybe the storm blew something in.”

Bill: “Wouldn’t we be sick if it was something like that? Something physically wrong with us?”

Doc: “There are new viruses discovered everyday. I’m sure there’s plenty that effect just the mind.”

Me: “When…when Henry died, I saw a light in the ocean. When I almost fucking went over, I saw it again.”

Everyone just stared at me with funny looks. Before anyone could say or ask me anything, Pete walked in with a few more of the crew. Even he looked off.

Pete: “What’s going on? Why is everyone here?”

Ed: “Not everyone. Where’s Danny and AJ?”

Leroy: “I don’t see Brookes either.”

Ed: “Shit. Leroy, Kevin. I need you two to go through the entire living block. Search every room and bring anyone you find back here.”

Kevin and Leroy nodded and took off back towards the rooms. Pete came striding up to Ed.

Pete: “I asked you a question, Ed. What the hell is going on?”

Ed: “No one is safe by themselves, Pete.”

Me: “There’s something going on here, Pete. Something’s getting into our dreams. Our heads. It’s trying to get us into the water. Can you tell me you haven’t been having amazing dreams about the ocean?”

The look on Pete’s face told me he had. He shook it off and changed the subject.

Pete: “Just because we’re temporarily suspending operations because of the storm and injured personnel doesn’t mean you can all huddle together in the cafeteria and start telling scary stories.”

Bill: “Bullshit! We’re all up shit creek right now, and if you don’t realize that you’re going to get more guys killed.”

Ed walked over to the middle of the cafeteria.

Ed: “Listen up! There’s no denying at this point, something very wrong is happening on our rig. We’ve all been having the same kinda dreams, and some of us are starting to act out of the ordinary. Putting themselves and others in serious danger. We got Tyler here, and he’s working on figuring this out. Until he does, you can go to him if you’re not feeling right or have any questions.”

Doc: “Can’t tell you I have any answers…but I’m here to help.”

Ed: “We have to ride this storm out. Wait until we can get in the air or call the coastguard. Until then, I don’t want anyone to be alone. Seems like the worst happens when you’re sleeping, so we’ll all sleep in shifts. Watch over each other in here and make sure nobody does anything stupid.”

There were a few murmurs in the crowd, but nobody spoke out. Seemed like everyone was in agreement. Everyone except for Pete.

Pete: “This is ridiculous!”

It’s assholes like Pete who can’t see the fucking writing on the wall. I’ve got to watch him. He might get someone hurt. After a couple minutes, Kevin and Leroy came back. They both shook their head with disappointed looks.

Kevin: “Nobody. We couldn’t find anyone.”

Ed: “Shit! Alright. I need some volunteers to come with me and search the rig.”

I immediately stepped up. I was scared shitless of what was out there, but I felt compelled to help. I felt like I was somehow more prepared for it than the rest of them. It didn’t take long for Bill to join me. The Doc was right after him. The rest of the room was still. Most of the men just stared at the floor. Finally, Kevin sighed and joined us. Ed looked worried.

We geared up for the rain and wind and headed out of the living block. We swept every module, floor by floor, room by room. Thank god we had cover most of the time. Winds nearly picked me up right off my boots when we were out on the platforms. The howling gusts and the torrential downpour of rain and hail beating against the walls and pipes was maddening. As soon as we’d go inside a module and close the door, the wind and noise would immediately stop and be replaced by muffled sounds of the storm and flickering fluorescent lights. It was like stepping into another world, but one just as tense and unnerving. Every time we turned a corner or opened a door, I expected to see AJ or Brookes come running at me with white eyes and screaming like a banshee.

We were outside on the northeast end of the production deck when we heard it, packed together tight and moving slowly down a corridor of pipes. A noise stood out from the wind and rain. It was someone singing. It was hard to make out, but it sounded Spanish.

AJ’s Cuban, I think. I’d heard him and Ed speak Spanish to each other a couple times. We followed the sound as best we could. It was a vibrant and loud singing, and you could tell he was moving. The song coupled with the horrible sounds of the storm chilled me more than the cold and the rain. It was like trying to chase down a fucking ghost. We were coming around part of the processing module when it stopped. We picked up our pace and kept heading in the direction we had heard it last. We reached a bit of walkway on the edge of the rig, past a few large mud tanks. First we came across a single boot on it’s side. Then Bill called us to the very corner of the walkway. It was a shirt, wrapped around the railing and whipping about in the wind.

We stared at it for a moment. We all knew what it meant.

We all hung our heads and turned back. I got a few feet before I noticed Bill was still standing by the railing. I walked back to him. He was staring out at the ocean, his eyes wide as hell and his complexion pale. I looked out, but didn’t see anything.

He didn’t turn to me when he spoke. Just kept staring out like he’d seen his own grave.

I looked out again, scared, but hoping I’d see it too. Nothing.

Bill: “It was just dancing around, right under the waves. Jesus fucking Christ.”

We rejoined Ed, Kevin, and the Doc, but we didn’t tell them about what Bill had seen. I think Bill was still doubting what he’d witnessed. We got back to the living block and the cafeteria. Thankfully, everyone else was still there. They all looked up, hoping to see more than five people. I was sad to disappoint them.

We’re all still here as I write this. A few of the guys are managing to get some sleep. We went up to the rooms in groups to get a few things to make the cafeteria livable. I guess we’re just going to try and hold out through the storm in here. It’s as good a plan as any, I think. God, I hope this damn storm ends soon.