Henry is dead. Fuck. Fuck. FUCK. If I can write it out, maybe it’ll make sense.

Okay. I woke up an hour or two ago. I lay in bed for a while listening to the sound of the storm against all the metal and the pipes. It was surprisingly soothing. I started getting hungry — my bad habit of getting up in the middle of the night to grab a bite to eat in the kitchen reared its ugly head. I snuck off the lower bunk and out of the room. Bill didn’t notice through his loud snoring. I made my way upstairs to the kitchen and found a couple of cookies. As I finished the last one, a banging sound started to become distinct from the rest of the noise of the storm. I followed it out of the cafeteria, and walked towards it. The metal banging on metal got louder. I started down the hall and it began to hurt my ears. Finally I rounded the corner saw it was one of the doors leading outside. Rain was pouring in and the wind was yanking it back and slamming it in sporadic timing. 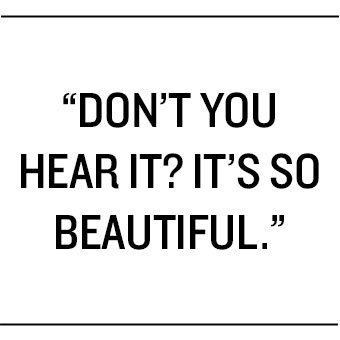 I managed to grab the door before it slammed again. I was about to close it and head back when I noticed somebody way out on deck, standing in the rain. He was near one of the gas compressors near the railing. I ran out to the end of the walkway at the corner of the living block. I could tell it was Henry. I yelled out to him, but he wouldn’t look at me. He was smiling with his eyes closed the whole time. Then he put his legs over the railing. I booked it down the two flights of stairs and over to the module he was on. As I got up behind him, he was already over the railing. The wind was picking up. He was holding onto the rail with his feet propped up on his heels and he was leaning forward over the water. I figured it was a bad idea to rush him.

Henry turned his head towards me. His eyes were still closed and he still had this…big fucking smile. He started laughing.

Then Henry let go of the railing. He spread his arms, and fucking dropped. I ran over, but I wasn’t nearly quick enough to grab him. I watched him fall 200 feet into the crashing waves below. My voice caught in my throat, otherwise I would’ve screamed. I looked for him, but didn’t see a body. I do think I saw a light. Just for a moment, and it was dim in the rain and black water. But I saw a blue light below the water’s surface for a second after Henry plummeted under it.

I ran to the nearest alarm and pulled it. We searched with spotlights and they sent boats out. I looked for an hour before I came back in. I could hardly stand and I was shivering from the cold and the rain. I had some hot chocolate and changed my clothes into something dry and warm. One of the boats is still out there and the guys are still looking for Henry, but I know they’re not going to find him.

Henry’s dead and I have no fucking idea why.

We didn’t get a lot of work done today. The well’s good, but we tapped out at 3,000 gallons. Nobody got chewed out. At lunch, there weren’t many jokes to go around. Everyone just asking questions about Henry.

“Did he ever sleep walk?”

“No, not while I was bunking with him. Slept like a rock.”

“Last time I talked to him, he was eager to get back to his girl.”

This one was directed right at me, but it took me a moment to realize. I looked up from my lunch and saw Doug.

Doug: “Before he jumped, did he say anything to you?”

Doug’s eyes weld up a little and he just went and sat down. The rest of the cafeteria was silent until lunch was over.

I still have 11 days on my shift, but I already want to go home. The weatherman now says that the rain’s going to pick up over the next couple of days. Not enough to stop our work, but enough to make it a bitch to get it done. I could be getting drunk or stoned in Port A or South Padre. Fuck, that’d be so much nicer than this. But god damn it, I need cash to do those things and this is the only job I’ve ever been any good at. I’m a Roughneck — I can take this shit. If I keep psyching myself up, maybe I’ll forget I saw a man die.