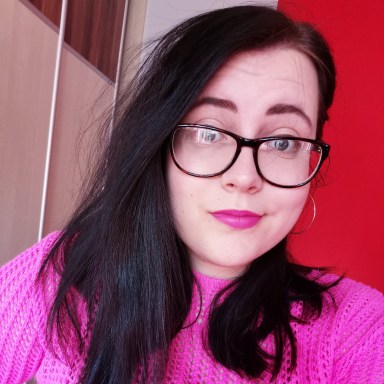 My love for her was intense, far more than anything I’d ever experienced before.

But she was a girl, and so was I. So, when it came down to it, I couldn’t go through with it. I couldn’t stand by her. I wasn’t ready to be queer.

I did the only thing I could — I forgot about her. And I mean that literally. I completely erased all traces of her from my memory.

No queers in small towns

This all happened years ago. Back then, I lived in a small town in the Czech Republic. Which, as you can imagine, wasn’t the place to be queer.

I remember that for the longest time, I didn’t even understand what the word gay meant. It was used as a slur, and that’s all I thought it was. I didn’t know what it was. I just knew it was bad. It was bad to be gay.

When I met this girl, she was 16, I was 14. And she was the first openly gay person I ever met. I was fascinated by her. She didn’t seem bothered about everyone knowing she liked girls. Up until that point, I barely knew that you could not like men. Meeting her was a shock to the system.

She was like a unicorn. You hear about them, but you don’t think they’re real. They’re a fairytale. But there she was. It was a world-shattering moment, meeting her. It turned my world upside down.

This all sounds pretty gay

We met at camp and became close. When I came back home, we would text a lot and be very lovey-dovey with each other. While we weren’t exactly in the dating stage, there was something between us. We both knew it.

But I was afraid. Afraid of her being a girl, afraid of what our relationship said about me. Still, I braced myself and told my friends about her. Not everything about her, of course. I never said I was in love. But I talked about her, described her as someone close to me. And I showed my friends some of the texts we exchanged.

Now, these texts were the level of over-the-top sweetness that only happens when 14-year-olds are in love for the first time. So, when I showed them to my friend, naturally, she went: “I don’t know, this all seems pretty gay to me.”

And that was when everything went to hell.

I’m not gay, this has been a mistake

I didn’t want to be gay. Everyone still looked at it as something bad, as a slur more than a sexuality. So, when my friend said that something I was doing seemed gay, I did a full 180.

For starters, I stopped texting her. Yep. I ghosted her. It wasn’t my proudest moment.

Then came the rationalizing. I’m not gay became my mantra. I would repeat it all the time, reminding myself of all the boys I liked. I started to believe that I never really liked her. I was confused. I only liked her because she looked like a boy. She had short hair, so really, she might as well be a boy, so I don’t actually like girls and I never did, right? Right? Right?!

No. Of course, that’s not right. But I’ll get to that.

It took me 4 more years to figure out what was actually happening in my sad little confused heart. I was bisexual, had been all along. I was a girl. I liked boys. But I also liked girls.

I knew that I was bi because of many reasons. I thought the women in TV shows were just as dreamy as the men. I had so many girl-crushes that I lost count. I had a genuine crush on one of my best friends. All of these were proof that I wasn’t straight, and I used them to finally arrive at the conclusion that I was bisexual.

What I didn’t use was the fact that I was previously in love with a girl. Surely, that would be a handy thing to remember when you’re trying to figure out your sexuality. But I couldn’t remember. Because I repressed the memory so well that it just wasn’t there. It was hidden somewhere deep in my mind, out of sight, out of reach.

I was a proud bisexual woman. But I still didn’t have the memory back.

The moment of truth

It only happened two years later. I was out, I talked about my sexuality a lot, I became involved with the LGBTQ+ community. It had been two years of my sexuality almost dominating my life. I was ready to explore, to learn, to understand.

It was one of the weirdest moments of my life. It was as if something unlocked in my brain. One second I didn’t know, the next I knew. All the feelings started rushing back. The emotions, the tender moments. What happened. How it happened.

I was shocked. Where did this all go? How was it possible that I didn’t remember at all before this?

The sheer power of our minds

I know why, but I’m still not completely sure how. I remember convincing myself that I didn’t see her as a girl, I saw her as a boy, and that was why I liked her. But that’s when my memory trail ends. After that, it’s nothing. Completely blank. Nothing for the next 6 years. No trace of her anywhere.

With hindsight, she was the most important love of my teenage years. The most intense one, too. Yet, I forgot about her for years, as if she never existed at all.

What happened then is a prime example of how powerful our minds are. I was dreading queerness with all my being — I was so afraid of it that I made myself forget about the person I cared about the most. I got rid of the evidence.

Being queer and being in love isn’t always easy. It wasn’t for me. I knew life was going to be harder when I came out as bi, but I only felt the consequences of it later. My internalized homophobia was already something that changed the course of my life before. I had to make sure it didn’t happen again.

Nowadays, I’m one of the people who talk about LGBTQ+ issues a lot. I care about the topic, I write about it, I bring it up with my more traditionally-leaning family. Sometimes, people don’t understand why I do it. Why do I have to talk about it all the time?

But they don’t understand because they haven’t been through it. The casual homophobia that was present in my childhood and the way other sexualities were never discussed took things away from me. Not just a relationship with her, which never happened but could have if one of us had been a boy.

No, it took actual memories away from me. Temporarily, but still.

Memories are, in many ways, all we have. It’s how we treasure things and people. The way we remember yesterday influences our today. It informs us, it gives life meaning. So, losing something as big as my first love, even if only for a few years, wasn’t something I was okay with. It still isn’t. I’m still not okay with it.

I made myself forget about her to avoid the social persecution I knew it would bring. I learned two things from this:

Talk about queerness. Be accepting of it. Don’t make people hate themselves just because they love who they love. Don’t make them forget.