Today felt like any other day. The normal slog. Until, that is, I sat on my train home and flicked through my Facebook feed on my phone. Someone shared a photo of themselves at graduation a year ago today… at my graduation… a year ago?!

I can’t quite put into words the feeling that came over me, but it left an unpleasant taste in my mouth. A year ago today I officially renounced my ‘student’ title and became unemployed by government standards. Unemployed. It’s a funny word. It’s not ‘not employed’ it’s un-employed, as if the state of being without a job is something you undid yourself, Ctrl-Z style.

I only express the gravity of that space in limbo because a year on, I’m not much further from where I was back then. Not really. Sure, a lot has happened in the space of a year, but how did the year pass and not much really change? I mean, yes, I do sort of have a job that I do on some days of the week, but in terms of high level life-long career path channeling, I’m not much further down the line with where I want to be than I was 365 days ago… and that’s an unsettling feeling. I was once told that every year should be better than the last. But I’m pretty sure last year was so bad that despite its relative ups, it was the worst year of my life to date — but my brother swears that was because Mercury was in retrograde for Taurus.

It’s just a common theme that I see oh-too-often when I look round at the friends and peers in my life, in fact it’s the one commonality: no one has their shit together or have any idea what a ‘put together’ life looks like without sacrificing some of the best of your younger years, 58%* of your waking week, to be precise. That’s more than half of your life doing something you don’t really like doing. Or assuming you retire at 65 and work an average 40-hour week since your 20’s, one would have worked 17 straight years of continuous work, without a moment’s break during your life. 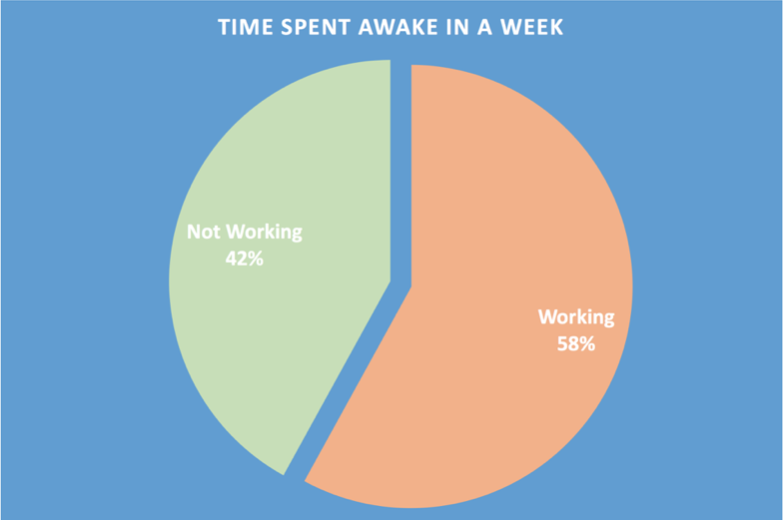 I have friends who did take the grad scheme offers — I didn’t — now in complete personality crises facing the existential question of working life, what it means and whether sitting behind a desk on a laptop drafting proposals, sending emails and managing someone else’s assets is all life really has to offer? I can’t and won’t accept that that is it. Sorry.

I won’t accept that this is a crisis unique to us millenials. It is in our genes to question every moment of life and ask why we are here and who we are. I don’t believe that no generation before us for the past thousand+ years didn’t ask themselves who they really wanted to be and what they could offer the world of their time? What does seem to be the case is that the most recent generations before us didn’t quite have as much choice; you either rebelled from the norm to become an artist/creative/lone entrepreneur doing your own thing, or you didn’t. There was no middle ground. Unlike today, where in Western society we have, I believe, the greatest abundance of choice in front of us than any preceding generation, we’re damn right allowed to be fucking overwhelmed with the choice. Your choices are no longer just rebel or conform but in fact they are unlimited. No outlandish concept, idea or product is out of the realms of possibilities which just make it that much harder. How are you supposed to know what you want to do when you quite literally can do just about anything? What a frustratingly real privileged crisis. I accept it is a privileged crisis, but a real one all the same.

Yet despite this sea of opportunities with this arguably unlimited choice of beings which our parents and grandparents before us would have died to be able to take by the horns, I look around at my peers unhappily slogging away at the daily grind wasting the best years of their youth. Some of the most creative of my friends are still working in banking earning a tonne of money, waiting all week to spend it on those very precious Friday and Saturday nights.

Let me just quickly recap that; the opportunities are there for people to do whatever they want but actually they aren’t doing it. Good grief what devil is at play here! So, I hear you ask, why aren’t these people (and when I say ‘these people’ I also mean me) doing what they really want to do? Show me a person who is truly passionate about (and by passionate I mean ‘would dedicate their life to’) developing new tax automation systems for banks, for example, and I’ll show you a liar! Which brings me nicely to the crux of the matter: we have but one life on this strange planet, to my knowledge, so we should be spending our extremely short lives doing the thing that excites us most and makes us want to jump up and down and run around and are willing to die for because we’re dying all the same and every day spent in a job that makes us feel tired, not energized, at the end of the day is a day better spent dead.

It sounds harsh and I’ve probably come across as some field-dancing hippie — I can assure you I’m not. I, too, did a degree in Economics and ended up in finance for a while before I decided to do that thing-I’ve-always-wanted-to-do-but-could-never-face-doing-because-I-was-scared-thing. It’s the only thing that ever really holds us back from doing anything: fear. Fear of failure, fear of disappointing those around us, fear of embarrassing yourself, fear of losing money. Unfortunately, fear is so innate in us that there is no Limitless-esque tablet I can offer you as a remedy.

I conquered fear by confronting my version of a worst-case scenario. For me it looked (and still does look) something like this: no money, no home. That’s as simple as it gets for me. When confronted in its simplicity, it is actually not that daunting a prospect and in actual fact is rather simple to remedy, were I to be in that situation. Worst case scenario, I could always get a full-time job in a café (therefore, money — check) and apply for social housing via the low income eligibility (housing — check). If housing refused me I could always crash on friends’ sofas (which I am aware I am fortunate to have) until I saved enough for a deposit on a flat to rent — two months on sofas, max. If that is my worst case scenario as a possible but not guaranteed outcome of quitting a job I hate and dedicating my time to becoming better at something I love, something I would die for, why the hell am I no longer taking that risk? I faced that decision a year ago and my, may I say faultless, logic won me over. I turned down the grad job and am now pursuing the thing my heart desires and haven’t looked back since.

What you should pursue and how you can turn that into something you can live off for the rest of your life is a topic for another blog post altogether which, I assure you, has its simple remedy too.

I realize that the above is oversimplified and that there will be times when it’s super tough and you’ll question every decision you’ve ever made, but the point I am trying to convey is that, yes, it is going to suck at times, but if you’ve found something you really would dedicate your life to then all the sucking and hard times are worth it and you’ll never look back and regret the time spent pursuing the thing you really want to do, no matter how difficult it is.

Nothing is as scary as it looks. If the worst-case scenario is death and you’ve found something worth dying for… need I say anymore?

26 Things I Learned During My First Year Of Real Employment

Graduating From College Was My Biggest Fear

4 Surprising Upsides To Being Unemployed

The Real Truth About Work-Life Balance