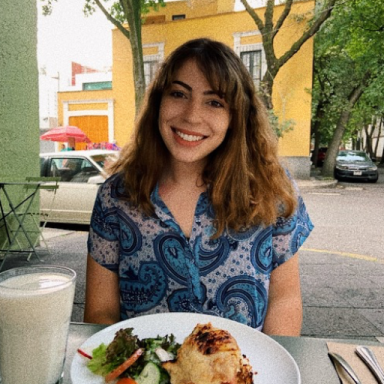 My biggest adventure yet came to me while I was finally breaking free of the debilitating chains that a past love, or the lack of it, had left me in. The kind of love that had emptied me, only to be filled again with splashes of color and powerful ideas. My greatest adventure has a first and a last name, and how I came to meet him has little to do with coincidence and more to do with today’s society. Through the connection of a mutual friend and the power of social media, I “bumped” into my biggest adventure through a friendly emoji in an instagram DM, and it wasn’t long until that simple action turned into everyday conversations where I craved nothing more than to deeply connect with him.

At first, he did not look like love to me; he looked like excitement and opportunity. I was so used to staring into black eyes that his green ones intrigued me. He lived the life I dreamed of but had always been too scared to pursue. Ideas turned to decisions and decisions turned to actions, and in no time I found myself on a bus for five hours to get a glimpse of the adventure I was unknowingly about to become involved in. He had the ability to make everyone around him feel at ease, laughing and smiling around him came naturally. For the first time in a long time, nothing felt forced.

I knew he was always on the move, and that was something I truly admired. It was never about attachment with him, I simply enjoyed talking to him and being in his presence. It was never about “forever” or “happily ever after,” it was about realness and finally appreciating the “now.” He talked me out of my fears and snapped me back into reality—the reality that life is what I make of it and the fact that making future plans is unnecessary if you have the resources to do it now.

Traveling always sounded appealing to me, but I always had an excuse as to why I couldn’t do it. Whether it was the fear of flying or the lack of money, there was always something standing between where I was and where I actually wanted to be and, if we are being honest, that “something” was only an obstacle created by my own mind. It was never real, and I was only cheating myself. You learn how to breathe when you begin to accept that you are never fully in control of what could happen next, and meeting him was the freshest intake of air I didn’t even know my lungs needed. Meeting him meant finally letting go, and that meant taking that trip, pursuing my desires, and doing what I had always wanted to do.

Five hours on a bus turned into over nine hours on multiple planes to get to Rome. A city where there is history and beauty in every corner, a city that allowed me to appreciate the rawness of the world I live in a little more, a city that left me hungry for learning more about what’s out there and how it got to be what it is today. This city also allowed me to see him for who he was. He would always take the sun with him wherever he went, and his light would only become brighter around those he loved—a beautiful sight to see. Days and nights with him in a place that seemed straight out of a movie felt like a dream. He did not take more from me than what I gave to him; he did not drain me until there was nothing left. He showed me how it is supposed to be. The attention, the support, the respect, the goofiness, the blissfulness, it was all there. A trip that gave me the answers I had been looking for my entire life: the answer to what is it that I want to do and the answer to what I deserve.

So yes, meeting him has been one of the greatest adventures of my life simply because he pushed me to take chances and to experience what I had been yearning for. Wanderlust boy, always wondering about what’s next while still keeping his feet on the ground, full of fears but never allowing them to control him. The warmth in his smile, his touch, was as genuine as his outstanding mind. There is so much more to him than what meets the eye—a whole universe lies within him, and that is one of the reasons he cannot live a boring, stable life.