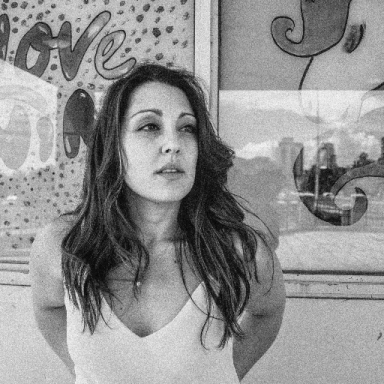 Elena had vivid dreams ever since she was a child. No sooner would she close her eyes than a movie would start playing, or at least that’s what she called them when she was too young to understand what they were. ​Mama, I watched a movie when I slept last night. Nonna was in it, she was alive, ​she would tell her mom in the morning over breakfast. She often dreamt of different family members, or characters in books that she read, or people from a movie she watched before bed. A few times she tried thinking about certain people right before she fell asleep to see if she could control who she dreamt about, but she couldn’t.

For weeks on end, she would have nightmares. She’d dream about death, about cats with long nails clawing her eyes out, she’d dream about drowning or about being stuck in the house while it blazed on fire. On those nights she’d wake up screaming or in a cold sweat. She’d slide off of her twin bed and walk quietly over to her sister’s. Slowly and very carefully Elena would fill whatever space was left on the bed. Breathing in tandem with her sister until she fell back asleep.

The dreams and nightmares followed her well into her teens and adulthood. Boyfriends would break up with her because they couldn’t sleep with her. When she was twenty-one she went to Boston with her then-boyfriend and dreamt every night there. One night she dreamt of a monkey in a red suit and hat, slapping symbols together. He was sitting in a bucket seat on some kind of contraption sliding up and down the hotel room wall; the monkey’s head slamming the ceiling, getting louder with every bump.

Elena woke up laughing hysterically. When she tried to explain the dream to her boyfriend, he rolled his eyes and said, ​Even when you dream, you’re a lot to handle.

Elena was used to hearing this, or versions of it. She had an overactive imagination, she lied a lot, she told and wrote stories for hours on end. She was dramatic and even the lightest push or shove from her sister turned into ​Mom, Jessie keeps hitting me! I’m bruising everywhere! ​In elementary school, Elena lied about headaches and stomach aches nearly every week. She’d stay home from school or get her mom to come pick her up before lunch because she “felt so sick.”

Eventually, her parents stopped believing her. Stopped giving in to her every cry for help. Her stomach aches and her headaches were ignored. They refused to pick her up or let her stay home. Elena would have to spend recesses indoors, hiding from the children who made fun of her for her glasses, her mortadella sandwiches, or the way her dad was always dirty from his construction job. She would hear their taunting in her dreams.

In high school it was a lot easier to blend in, to become invisible. She had to wear a uniform, sat at the back of every class, and refused to bring a packed lunch. It was in grade eleven that Elena decided to take control of the high school dynamic. turned every confrontation into a scandal. She wrote anonymous stories for the school newspaper and spread rumors like wildfire. She loved the drama, loved to create scenarios that could match the excitement and fear of her dreams.

She wrote these rumors in the form of poems or short stories and was careful to mix fact and fiction as subtly as possible. After weeks of being made fun of in gym class by Amanda and Nicole, the prettiest and thinnest girls in grade 11, she took matters into her own hands. She crafted a poem that she is still proud of. One involving a cheating boyfriend and a sex scene reminiscent of Jack and Rose in the back of the car. The boyfriend looked insanely similar to Nicole’s and the girl he was having sex with looked a little too much like Amanda.

A few days after the poem was published Nicole ran into the cafeteria, screaming at Amanda for being a HUGE WHOREY SLUT. Nicole defended herself while the boyfriend backed away slowly. The screaming turning into a girl-on-girl brawl and the school was never the same.

Now, at the age of thirty-five, after giving birth to her own set of twins, Elena still dreams. She doesn’t lie like she used to, she doesn’t crave the creation of drama. She’s had enough of both. She spends her energy trying to understand her dreams. She dissects them, mulls them over in her mind, asks her wife about them, keeps a notebook by her bed and documents every dream she has. Her bookshelf is full of books about dreams and she spends a lot of time researching their meaning. She finds comfort in seeing the books on the shelf even if she didn’t always like what they were trying to tell her.

Now, it’s rare for Elena to have the same dream twice unless she’s really bothered by something. Since giving birth to her daughters thirty-three days ago, she’s had the same dream almost every night. When she wakes it feels like she’s been stuck in a memory rather than a dream. On the thirty-fourth morning of having the same dream, she calls her sister.

“​I’ve been having the same dream for over a month. I was standing by a large window in a white, grey and yellow kitchen. It looked like a test kitchen; the kind of kitchen you see on The Cooking Channel or in a magazine. It looked like I was on a T.V. set but it felt and smelled like it was lived in. If you looked closely enough at the walls you could see scuff marks and coffee stains. You could see the paint chipping on the window sill. It was oddly warm inside; I felt sweat droplets on my temples. I stood next to a man who was, and wasn’t, Zio Frank. I felt too at peace for it to be him. It looked like him, it spoke like him, but it just couldn’t BE him. Even the me in my dream knew that I would never be standing beside him, ever again. Not after what he did.”

“Okay, so what happened?” Jessie asked,

“I’m a child in this dream, I can tell by the way he towers over me. There’s a huge stainless steel bowl on the counter in front of us filled with a yellow doughy substance. The mixture is so tart that when I lean in and take a whiff, I can feel my cheeks pinch back and my mouth begin to water. I know that there’s lemon in the concoction but we don’t discuss this, Non-Zio Frank and me. We pretend like it’s supposed to be there.

Supposed to be taking over our senses. I reach for the icing sugar and pour a mountain of it into the bowl. I grab the hand-mixer and turn the power on HIGH before I even get it into the bowl. The whole kitchen fills with a cloud of sugar. A thick, wet, fluffy sickly sweet and sour snowstorm pours down on us.

Non-Zio begins to laugh. A volcanic, guttural laugh is about to erupt from my mouth, where a SORRY should be coming. I can hear a ‘sorry’ but it’s coming from the lips of Non-Zio, in between bouts of laughter. The dream ends with my laughter echoing so loud in the big, bright, beautiful kitchen that I wake up with a smile on my face. I didn’t think he would ever be able to make me laugh again.”

Her sister is silent. Breathing into the phone, letting her thoughts marinate.

“What do you think it means? I haven’t thought about him in years,” Elena asks.

“Ellie, it’s been exactly five years since he drove his car into oncoming traffic. It’s probably that” she replies matter-of-factly.

“Do you still believe it was suicide? The police said he hit a sheet of black ice and went flying.”

“Oh, I know what the police said but I think his guilt was festering all those years and killed him from the inside.”

After his divorce, Zio Frank moved in with their family when they were ten-years-old. Elena and Jessie were excited, he was the fun uncle who doted on both of them. Took them out for ice cream and let them stay up late when he babysat. Jessie would fall asleep on the couch and Ellie would be wide awake, not being able to fall asleep until the movie was over.

Jessie lets out a big sigh, “Ellie, a real Uncle, doesn’t do what he did to you. A real uncle doesn’t lie or use you. He doesn’t ask you to keep secrets when you’re too young to understand what’s going on. Just because he’s blood doesn’t make him family.”

“Not according to Mom – she still doesn’t believe me,” Elena walked to her refrigerator and opened the door absentmindedly.

“He’s her little brother and you were such a goodman liar as a kid. No one wants to believe the worst in people,” Jessie said, “Listen, we both love mom but I’ll never forgive either of them for this. Can you fucking imagine if this happened to your girls?”

Elena reached for the jug of water filled with thick lemon wedges and pulled it out of the fridge. She slowly grabbed a vintage blue tumbler from the cupboard and poured herself some water. A lemon wedge fell into her glass, making the water jump, splashing her wrist.

“I think you just wanted him to say sorry, to apologize for what he did to you. That’s what this dream is really about. It’s okay to be happy he’s gone – I fucking am. Ellie, your past is not you. Don’t let him hurt you when he’s not even here.”

Elena silently wiped her tears while thinking about what to say next. She wanted to put into words how guilty she felt, how angry she still was, how every time she looked at their mother and she saw bits of her uncle it made her sick. She wanted to tell her sister that she wished she could tell her mother exactly what happened all those years ago, all over again. She wanted to admit how mad she was that their mother didn’t believe what was going on. How could she?

As the scent of lemon hit the back of her nose, she replied, ​You’re right.

Do You Think Of Me When I Think Of You?

The Sex Dream She Had About You Last Night, Based On Her Zodiac Sign

If You Read This Story, You’ll Think The Fuck Twice Before Telling Your Wife ‘It’s Just A Nightmare’

Keep Me In Your Heart For A While