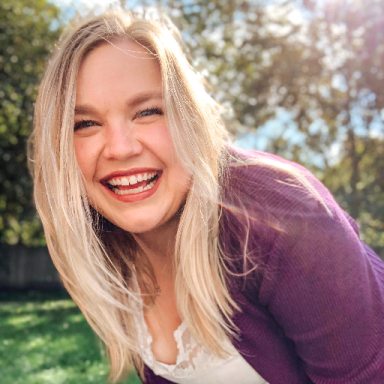 If there’s one thing to know about me, it’s that I’m a master of giving up.

I guess “giving up” is a more negative term. What I mean is that I start something with gusto and then let it slowly taper off until I forget about it and it becomes yet another unfinished project to add to the pile.

If you’re a creative, and even if you’re not, maybe you know exactly what I’m talking about. It begins with a spark of an idea you get reeeeally excited for. You start right away. You start with passion. With purpose. And then the excitement fades. You get bored, distracted, or discouraged.

It started when I was little. You name it, I tried it. Tap dance, jazz dance, gymnastics, swimming, soccer, piano, girl scouts, color guard, playing the flute, playing the oboe. And I get that when you’re young, there are a ton of things you try and realize that you don’t like them. But it wasn’t that I didn’t necessarily like them. It was that I always felt like I could never be good at them.

Fast-forward to adulthood, where I’ve given up a lot less. But there are still things I pick up once, then they go to the closet never to be seen again. Cross-stitch and the ukulele. I briefly started a cupcake venture with business cards and everything.

But the one thing I’ve always really wanted to stick with was an exercise routine.

I ran cross country in high school, and the running continued on through college. I’d go on a random run, and it became my therapy. I felt free and alive, and the stress washed away. But even though I loved it, I would never make a consistent routine of it.

Same with dieting. I love my veggies but never made an effort to consistently eat healthily. Life got in the way. I was really busy, okay?

Or was it that I just didn’t make the time?

In January 2019, I decided it was time. Time to stop giving up. Time to dig my heels in the ground and actually stick with something. There was also a wedding dress I wanted to fit into (a small source of motivation).

So I started working out in the mornings. I committed to an 80-day program of home workouts, and I got up every morning before work and stuck with making a change.

Not only did I complete an 80-day program, but I continued on from there. Throughout the entire year, I learned how to show up for myself. I learned that I could indeed stick with something. I learned that I had it in me to not give up. I learned to understand that not all goals are achieved quickly. That just because you think you aren’t good enough to continue with something, doesn’t mean you should stop trying.

I found my worth. I stopped taking anxiety medication. I started becoming happier. The light in my eyes came back. I began to believe in myself.

And I fit into my wedding dress. The goal that started it all.

Whether it’s fitness, an art project, eating healthy, sticking with a hobby, or just getting out of bed in the morning, here’s what I learned in overcoming the habit of giving up.

Toxic relationship? Thank you, next. Unhappy with a painting? Take it in a different direction. That dream job turns out to be a nightmare job? Update that resume.

Sometimes giving up means giving into something else that could change your world. Don’t hold on to things that aren’t meant to be.

2. Pick your time commitment and stick to it.

Whether your goal is writing more, working out more, or finishing that book you keep meaning to pick back up, set a goal of commitment and stick with it.

Maybe you say you don’t have time. Assess where you spend your time. Do you watch TV for 5 minutes a day? Maybe change that to 5 minutes of writing.

There’s an Elizabeth Gilbert quote I heard her say at the INBOUND conference, and I’ll leave it with you here: “What are you willing to give up, in order to become who you really need to be?”

Surround yourself with people who understand your goals and are willing to help you get there.

That doesn’t always mean people who scream, “YOU CAN DO IT!” It’s people who understand when you can’t go to a party because you have a commitment. People who will show up and work out with you. Who will text you and ask you how that project is going. Who will make a healthy dinner with you instead of heading out to the bar.

Your support system is huge. If you’re surrounded by people who aren’t supporting your goals, find people who are, because we can’t always do it on our own.

4. Celebrate victories along the way

Goals take time. Sometimes they take so much time, we want to throw our hands in the air and say “NOPE!” and go eat ice cream.

Celebrate the small victories along the way. Pat yourself on the back. Do a little dance. Keep encouraging yourself with positive reinforcement instead of dwelling in the reality that you haven’t met that goal yet.

If you do give up, and you are wallowing in the fact that you gave up, that really gets you nowhere.

Forgive yourself and pick it back up again. If you can, try to define the habit that caused you to fall off the tracks and do it differently next time.

But the biggest thing of all is to realize that you are only human. Give yourself grace. And keep going.

An ENFP in writing action. Feeling, learning, and sharing.