One of the big disappointments for me (and I’m not the only one) were the Sand Snakes. The book introduces them with separate personalities and styles even from their first moments: Obara the aggressive one (with the spear origin story) wants to declare war, Nymeria the elegant courtly one wants a political coup, and Tyene the sweet poisoner one wants to assassinate some Lannisters–all to get revenge for their father.

Their uncle, the prince of Dorne, locks them up and Arianne, his daughter, kidnaps Myrcella on her own elaborate plan to crown her queen. Only after she fails does Prince Doran reveal what he’s been planning – a plot deeper and more cunning than Arianne’s, that will take true revenge on the Lannister regime.

In the show, this plot line was tightened to the Snakes grabbing Myrcella out of the palace, making it about ten steps, and getting thrown in prison. Certainly, trimming down some of the complex Dornish plots (which all end in various failures) makes sense, as does substituting Jamie and Bronn for a forgettable Kingsguard. But Prince Doran has lost the deep game he was playing (probably) and the Sand Snakes are shallow caricatures. Only Mrycella appeared interesting at all. Then, when she and Jaime had that sweet happy moment, we knew what was coming.

Book five ends with Nymeria the Courtier Sand Snake heading to King’s Landing to take that Council Seat, not the young, rather dull prince of lovesickness. Some of us, delighted by mouthy Lady Olenna, would have been happy to see an aggressive woman on the council (assuming she doesn’t get waylaid on the way of course). The other Sand Snakes of the books go out to play politics with the sweetest one, Tyene, infiltrating the High Sparrow’s world, Obara leading a Kingsguard knight into a trap, daughter number four, Sarella, “playing a game” disguised as a male student in the Citadel, where Sam’s going, and one of the youngest having dragon dreams. One assumes that these show Sand Snakes won’t be doing all this, though it’s been mentioned there are eight.

Daenerys’s flight was lovely, though she appeared to abandon her best friends to be torn apart – in the books the friends were in no danger when she took off. Having Jorah be the pit fighter was extra-dramatic and everyone likes that Tyrion had a chance to meet the dragon queen – in the books they’re still stuck tantalizingly near the city when the brazen beasts in their masks start to turn on Daenerys’s rule. She appears to end the season with one dead fiancé and one living paramour, which works out for her if not for the politics.

Tyrion and Varys with Grey Worm and Missandei ruling a city on the brink of revolution that hates their Western culture is intriguing, a glowing step for the characters and something to enjoy next season.

Arya is doing well. It’s fun for fans that she’s taught by Jaqen, not a new character (though the face switching makes both of these facts less-than-certain, actually). It’s also fun that she keeps her “Arya Stark” persona close and abandons her duty to kill Meryn Trant off her nightly list – something that happens in a released chapter from book six with a different petty villain on her list. In both, Arya slightly seduces her victim – this girl is growing up from asexual child to adolescent. And brutally murdering people of course.

The Cersei-Margaery plot is proceeding about right. Tommen (nine in the books but now seriously aged up until he seems older than Joffrey) is completely useless as king. All right, he doesn’t have much experience. But Joffrey wouldn’t put up with this kind of treatment from the church. Certainly, all those in charge are taken aback by the power of this non-compliant High Septon who points out shockingly that the rich only rule through the consent of the poor. Even Olenna is getting smacked down by the High Sparrow as for the first time she realizes a French Revolution could happen on her doorstep. And Littlefinger, as always, has a sneaky card to play. One assumes one of his games might include marrying Sansa to Loras, after Ramsay Bolton gets killed.

Fans were shocked when Sansa wed Ramsay Snow – in the books, it’s a minor character to have this role and it’s Theon’s story about finding his inner heroism even after all he’s endured. Since the wedding, fans waited through a drawn-out sequence for Brienne and Theon to finally rescue her…something that lingered for quite a few episodes. Last season, the dark Lady Macbeth-Sansa claimed her power, using Littlefinger and the lords of the Vale instead of continuing to be a puppet. (In the books she’s a full season behind, still in the Vale and still following Littlefinger’s orders as he schemes).

However, the Sansa who marries into the Bolton-Frey family that murdered her mother and brother, then quietly walks into Ramsay’s bedroom (does she have any plan at all?) has lost a lot of agency, even before Ramsay starts torturing. One might argue that she has no choice, but between options like smuggling in a knife or poisoned purple necklace, calling Brienne, and a move like Catelyn’s wonderful public recruitment of Riverlands knights in season one (simply because she knows she’s on her own turf and can call for help as Sansa could have done at her wedding ceremony) Sansa has reverted to pawn and plaything. In episode ten, she wears dragonfly clips, a nod to the dragonfly jewelry she wears while helpless and evanescent in King’s Landing. She appears to still be that girl – a disappointment for us all.

In the finale, an awful lot of characters got Rains-of-Castamered. Of course, the minute that song plays, everyone on-screen is in trouble. Next season we have Cersei, Margaery, and Loras on trial (unless some of them strike a deal). Of course one battle of Loras vs. the scary possibly headless Frankenstein knight back from the dead could settle it all, though Cersei’s last surviving child might finally turn against her. Cersei, of course, is set to go ballistic when she hears about her daughter.

Jon Snow’s plot stretched out all season, as the orphan kid Olly glared at him in every scene. The enemy gains a face in Night’s King, the leader of the wights, who also glares at Jon in their encounters. He, like Olenna and Cersei, needed to pull back on the grandiose plans and notice what was happening right next to him. The web is overflowing with speculation on how dead Jon is or isn’t. Of course, options besides resurrection (thanks to Ghost, Bran, Melisandre, or the Wall) include his transforming into his wolf, becoming a wight, or even taking a season off. We shall see.

Stannis’s plot certainly wrapped up as he escalates to burning people he doesn’t care for to people with king’s blood to finally burning his only heir (making his kingship beside his barren wife a bit pointless, but this one was clearly foreshadowed). Mr. Stubborn has proved a complete reluctance to turn back and a willingness to do Melisandre’s dictates, so there we are. Viewers didn’t see the death blow, but producers have confirmed that he really is really dead. Now Melisandre is left on the Wall, and Davos is a possible loose end – the completely loyal knight without a master. Of course, if he’s done with politics, he could certainly take the Black (though in the books his wife and surviving kids are still a draw).

As for the multi-sided war, since the Boltons are allied with the Starks, it seems over until Daenerys arrives. The books emphasize that as each king dies, another rises to take their place and continue the fight. Book five has pretenders from the east with mercenaries, while Stannis still fights on in the North. Of course, we’ve yet to hear from Theon’s family, who appear to have been cast for next season. Yara’s book five butt-kicking plot, as she becomes a conqueror in the North, has vanished, and after her brave announcement that she’ll tear the North apart and bring her brother home, she only engaged in one quick failed attempt then vanished from the screen. One hopes she’ll get a nice big arc in season six. Theon’s family plot may come out much like Dorne – one veteran character introduces a group of new ones, then they try a coup that’s basically self-contained and has little effect on the outside plot except to make Cersei angry that more upstarts want her throne. The Greyjoy plot is nearly the only book plot not yet covered (aside from some like Lady Stoneheart and Aegon Targaryen that appear canceled altogether), so fans expect it in season six.

Other people cast appear to be Sam’s family, who live quite close to his destination of Oldtown. We’re eager to see Sam the Slayer face down the father who planned to kill him as an utter waste and forbade him to be a maester (a truly stubborn and cruel decision that would have solved his and Sam’s problems together). He is of course trying to solve the mystery of the ice wights and the ultimate conflict to come – perhaps he will succeed in time. As we all know, Winter is coming – and by now it’s basically here.

Get more #GoT in Valerie’s latest book here. 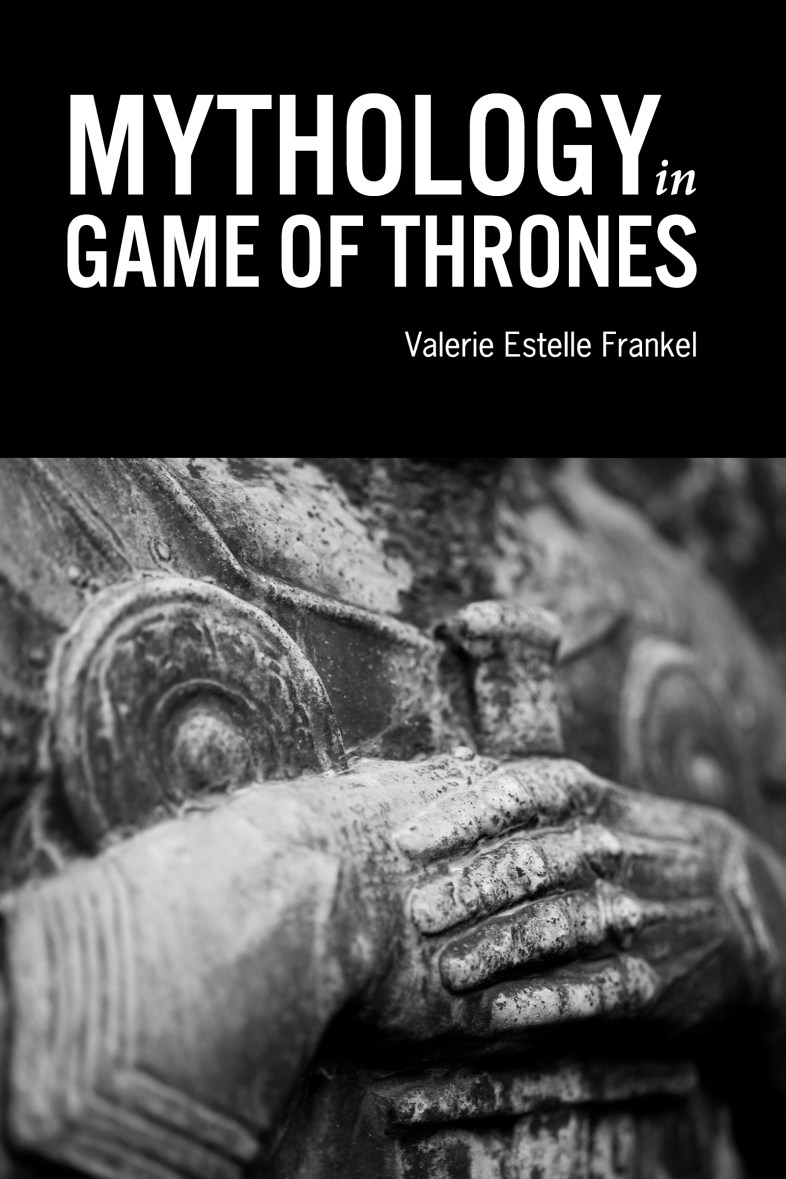 This Is What ‘Game Of Thrones’ Teaches Us About Loyalty, Bravery, And Fighting For What We Deserve