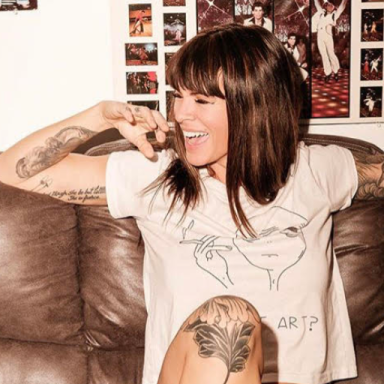 I have always been a small girl. I know I’m small because people have always told me that I am, not because I can see it—I never have. Third grade was the first time I remember feeling insecure about my weight. I remember everybody in class starting to talk about how much they weighed, so I went home one night and hopped on my mom’s scale. I was 68 pounds, and I’ll never forget that number. It was that moment that I was introduced to the concept of body weight.

I had been listening to the other kids talk about their weight and I hadn’t heard anybody say they were 68 pounds, not even the boys. I knew I was one of the tallest kids in class, but my eight-year-old brain couldn’t make that connection, so naturally, I went into panic mode. I was insecure about my body from then on out and wore baggy sweatshirts and jeans for the rest of my childhood. I wore oversized T-shirts and basketball shorts whenever I went to the pool or the beach.

The next stand-out moment came in middle school. I didn’t know that for track tryouts we were going to be measured and weighed, and the only thing that stopped me from running away and taking up a different hobby was knowing that I would have to explain to my parents! There I was given a new number to obsess over. Immediately after weigh-ins, all the girls went back to the locker room and started asking each other what they weighed. Most of the girls were hardly 100 pounds. I lied and when asked how much I weighed and ran straight for the buses.

After that day, my poor body image escalated beyond covering my body, and I began to obsess over specific parts or “flaws”. Throughout the following years, I continued to struggle immensely with my body image, going through phases of not eating, abusing laxatives, using HCG, appetite suppressants, drugs, fat burners and spending hours online looking for all sorts of cosmetic surgeries that would “fix me”.

It wasn’t until about three years ago that I came to learn that I have body dysmorphic disorder (BDD). BDD is a mental disorder characterized by an obsession over one’s appearance or body parts and belief that some aspect of one’s body is severely flawed. While BDD has similar features as eating disorders, they are not the same, though both can certainly exist concurrently. People suffering from eating disorders are worried about the shape of their body as a whole or their weight, while people with BDD are obsessively concerned with a specific body part.

It wasn’t long after my diagnosis that I decided I couldn’t be miserable and physically uncomfortable anymore due to this disorder. I knew that I couldn’t make BDD disappear but that I could at least control how much I let myself suffer physically. No more overheating to the point of sickness because of the shame I felt over my body and no more feeling limited in the clothing I could wear for fear of exposing my “flaws”. When I started wearing shorts in public, it was terrifying at first. My best friend told me how proud he was of me for doing it, and it was him saying that that made me realize how tight and relentless of a grip this disorder had on me and how much I had been feeding it.

There’s a famous Cherokee legend about two wolves that illustrates the battle within all of us between positive and negative thoughts. An elderly man talks to his grandson about a battle going on inside of him between two wolves. One wolf is evil—he is arrogance, greed, envy, anger, lies, and ego. One wolf is good—he is love, empathy, humility, hope, and truth. The man tells his grandson that this fight is happening inside of all people, and when the grandson asks which wolf will win, his grandfather tells him, “The one you feed.” I think this is an important message for everyone, but especially for those who are fighting a personal battle, whether it’s mental health, addiction, physical health, or something else. There is so much in this world beyond our control, but thankfully we do have control over what we “feed” ourselves. Stop feeding yourself the things that make you feel bad about yourself. Don’t feed your insecurities, your ego, your greed, your fear, your hate, or your jealousy. Feed your heart, your mind, your soul, and your booty.

I currently weigh more than I ever have. My struggle and warped perception of myself goes back to the deepest places of my childhood and beyond in ways I haven’t yet realized. It started as a seed that was passed down to me and then subconsciously watered and nurtured by my hand for decades.

Watching the number on the scale go up has been excruciating, but I push through it and remind myself that I’m stronger and healthier than ever and that this added weight on my body has come from hard work and perseverance. Buying bigger clothes has been difficult, but the most difficult adjustment has been something I didn’t foresee. My entire life I have been told to “eat more” and that I look “sickly”. Food and binge-eating are things that I have had a complicated and unhealthy relationship with and have struggled to navigate. When I started gaining weight, people stopped telling me that I looked sick and stopped telling me to eat more. Ironically, I found myself upset that people weren’t saying these things to me, because while they had once offended me, in my mind it meant that I was no longer skinny.

BDD is exceptionally difficult to navigate because it’s one of those disorders that affects not only the individual suffering but also the people closest to them. For years, people who spent enough time around me would become familiar with my insecurities, but then acknowledge my size and end up telling me I was just “fishing for compliments”. I can’t even put a number on how many times I have been told that, and it has always worsened the situation by making me more aware of how badly I struggle with my body image and how warped my perception is. It also made me embarrassed and ashamed, leaving me wondering, “Maybe I am just searching for compliments.”

I have had to put immense effort into learning how to ignore people’s interpretations of my disorder. However, some people have genuinely been affected by my experience with BDD and know how big of a part of my reality that it is. My mum, who has probably witnessed my struggle most intimately, watches heartbroken and constantly wonders if I am the way I am because of something she said or did while I was growing up. We’ve spent hours over the years talking about this overwhelming aspect of my life, and she spins her wheels trying to think of ways she can help me. My stepdad, who spent a few weeks leaving food next to my bed while I slept through entire days during a rough summer full of mental breakdowns, hoping I would eat just a few bites. I feel I failed my little sister immensely by being so ashamed of my body and letting her grow up with a role model that wasn’t as strong as she deserved. How could I help her grow to be a strong and confident woman who loved herself if I couldn’t even be one myself? Thankfully, she is a warrior and didn’t need my leading example to grow into a strong and fiercely self-assured woman. There are people I’ve had relationships with that I have pushed away with my BDD, people who stopped wanting to be around the annoying “skinny bitch” who always says she’s fat, which in turn makes them feel insecure too. The list goes on. But so does the fight.

These are just some of my most vivid memories and feelings along this journey, but it seems to be a never-ending plague. It is estimated that BDD affects about 2% of the general population, about 1 out of every 50 people, and is more prevalent in women, teens, and people with preexisting psychiatric conditions. It is also my personal belief that these numbers will rise as we see young people grow up with social media, with the images of “perfection” being shoved down their throats nearly constantly.

Body dysmorphic disorder can be managed and worked with, with immense effort, but there’s no cure. I believe the best thing we can do is be aware of the disorder, the symptoms, and the various treatment options available. If you struggle with BDD, you are not alone. Keep fighting and remember to only feed the good wolf.

Often referred to as a human puppy.