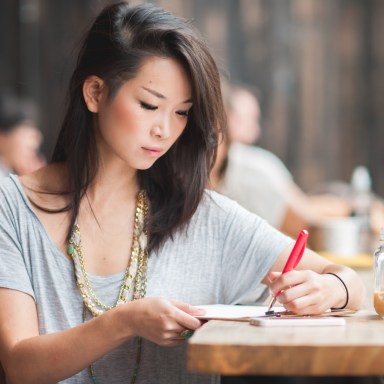 It was one small sentence out of a long email from my ex-husband, but it was the one that glowed neon behind my eyelids as I tried to sleep that night. I had moved out two years earlier, and our divorce had recently gone through.

Once every few months, we felt compelled to send each other slightly rambling emails to let the other know where we were in our individual processing of this very foreign situation, a situation I felt responsible for since it had been my decision to take apart what we had built. The main point of this particular email had been to tell me that he had met someone he really liked. I was happy for him, truly. I’d always told him there was a better fit for him, and I love to be right.

I guess I had assumed we would always love each other in some capacity. For the first time in ten years, I was suddenly acutely aware that no man in the world loved me. I felt a strange mixture of bereavement, relief, freedom, and loneliness. I might’ve cried myself to sleep.

“You didn’t have a failed marriage, you had a successful one. It just didn’t last.”

My therapist said this to me more recently than I’d like to admit, as I was sitting on her sofa, telling her how it still hurt to think about how deeply I had failed. I don’t know who coined the term “failed marriage,” but that shit stings.

When I first thought about leaving, I was terrified by the idea of letting down his family, my family, every wedding guest, everyone who’d ever wished us well – I felt like I had failed them all. And of course I especially felt the burden of failing the person I loved most in the world, the person I had promised to stick by no matter what.

It’s safe to say that choosing to get a divorce has been the most confusing, counterintuitive experience of my life. You’re just not supposed to give up on a marriage. Common sense! It’s not like I was never given the memo. I struggled with what I knew to be “right” versus what felt authentic.

What made it more confusing was that in many ways we had a great relationship. We complemented each other so harmoniously, felt so comfortable together, and worked together as a team on everything. But we were codependent to the point of not being individuals anymore. Instead of growing in our union, our world became small. We were so content just to relax with each other. It was sweet and idyllic, but it wasn’t a full life. I wanted us to have full lives. And I didn’t think it was possible to do it together.

The whole separation and divorce process took two years. Every single day of those two years, I woke up in the morning asking myself if I was making the right decision. Between every activity during the day, I’d be turning the question over and over. And every night in bed I delivered a verdict. There were maybe three days in those two years where I went to bed thinking that I should stay married, but the other 727 days ruled that I had to leave.

Once we had identified our relationship’s fatal flaws, all the memories looked different, like maybe we had been wrong all along. Seeing nearly ten years of my past through this lens was cripplingly sad – it made it hard for me to believe in love, or trust my judgment. But then:

“You didn’t have a failed marriage, you had a successful one. It just didn’t last.”

It was like permission to cherish those memories again, to let them be beautiful once more, instead of just foolish. Those words restored joy to my past.

“I will always root for you.”

I wanted to share this new perspective with my ex-husband, though I didn’t think he would see it the same way. He agreed that maybe he had a different view of what a successful marriage was, but that there had been a lot of good.

Me: I think we had a successful divorce?

Him: I’ll agree with that. It was a success. Good to hear from you. Good night.

Rewind to when he told me he met someone and neither hated nor loved me. I took a few days to respond, because I didn’t know how to describe the way I felt. I finally wrote back with the most accurate words I could scrape together:

“I understand that you can’t love me anymore. So I won’t say I love you, but I will say that I will always root for you.”

This is how I truly feel. I’m rooting for him, his success, and his happiness. And despite all the pain I’ve caused him, I know he’s rooting for me too. Knowing that we could very well be sources of hate to each other, but instead have chosen to be sources of invisible support, is one of the most strengthening affirmations of goodness in the world to me.

This is the most meaningful and precious thing I can take from my divorce: We are all capable of hurting one another so damn much. And in our fumbling to figure out life, we do. But it is through this pain that we discover our superpowers–our ability to communicate, understand, and forgive. Our ability to heal.

I thank my ex-husband for showing me these things. We’re something. Not friends, not enemies. Just two human beings in this great big world, rooting for each other from a distance.

Tria aims to accompany others through confusing and difficult times by way of writing. Favorite topics include death, ...