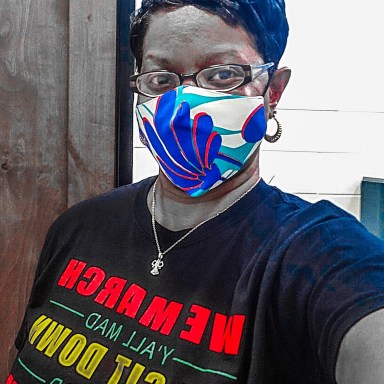 I left without saying goodbye. I did it because it was time. I knew it. I know you knew it. Why were we hanging on? There was love . . . there was old love that flickered as a reminder that my heart would keep breaking if the cycle continued and I did not want it to, so I broke the cycle. I should have been brave enough to say goodbye. I should have had the courage to tell you why I was leaving.

We’d managed to be what others thought we were for over a decade knowing damn well who we actually were and I guess that didn’t bother you but it sure as hell ate at the core of who I am. It stopped me from living freely.

The day I left, it felt right — like a rite of passage — something meant to cross me over into or on to a higher plane. I backed away slowly, taking everything familiar to us with me.

I had no plan of action.

The days that followed soon after, haunted me. There were photos of you up, gifts that you’d given scattered around my home, and scents you would wear. I had to erase them all. I had to get rid of them. It was a time of cleansing — burning sage and lighting candles became a frequent pastime yet you still remained.

I’d been doing fine, seven months had passed. Until one day . . . I was looking for an older photo of Jernee to share with someone and there you were, with the kids . . . All of you smiling. All of you happy. You staring back at the camera with a plump, dimpled cheek, and I lost a little bit of strength that built itself inside me. The tower fell. The wall came crumbling down.

Every brick that was laid crushed right before my eyes. I was breaking . . . again. And you wouldn’t know it.

I wake up sporadically during the night.

The other night, I had been awakened from a deep sleep by the urge to pee and the theme music from Pinky and the Brain playing in my head. How odd, I thought. Not the urge to pee, but the theme music. Why Pinky and the Brain? Why a cartoon from a time I vaguely remember? You’d know. I know you’d know. But I couldn’t ask you. It was late and it’d been nine months. And anyway, how would I start off that conversation?

“Hey, you’re asleep, I know . . . but when you wake up, you’ll see this — I had to leave. I was an ass for the way I left but it doesn’t seem like you mind. Why in the hell is Pinky and the Brain’s theme music popping up in my head in the middle of the night?”

You would scoff at the audacity of my untimely text message the moment you saw it. You’d curse under your breath, angrily. You wouldn’t want to wake anyone else up. You’d probably say something like, “How the fuck should I know, Tre? Are you okay? I know . . . I understand. But you still could have said something. I hate you for that.”

You were witty and forthcoming with just the right amount of bite in every word. The South does that to biracial women who are activists fighting to be seen. Fighting to be heard. Fighting to let others know they’re just as black as the rest of their people. And I loved that about you.

I haven’t found anyone else.

Not that it matters. Not that you care. Not that I expect you to. I left but you had done so years before and the door was slightly ajar. I had grown tired of looking at it that way — a sliver of opportunity for you to come waltzing back in. I closed it.

Funny thing is, I thought you’d appear with a key and open it. But that’s just a dream. And we were just a thing that probably should have never been that thing but it still hurts.

I have an inkling I’m not alone in this. Many of us have that one person who stripped us of ourselves and left us with a gaping hole in our hearts. We have to move on, right? We must move on. The hard part is no one tells you that months or years later, reminders sneak up on you and restore some of those faded memories.

The fight then becomes keeping your sanity versus allowing those reminders to take over and win. How often are we telling ourselves, “I am more important than what we were? I have a right to heal and be happy.”

The truth is, there will always be a person with whom you connect intensely and if and when your relationship with that person ends, you are still you. You have to find a way to remain you and not lose yourself because of them.

You can move on or waste your time sitting around waiting for an apology that will never come. You don’t need it. Trust me, you only think you do.

And yes, I tell myself this too. And now, I finally believe it.