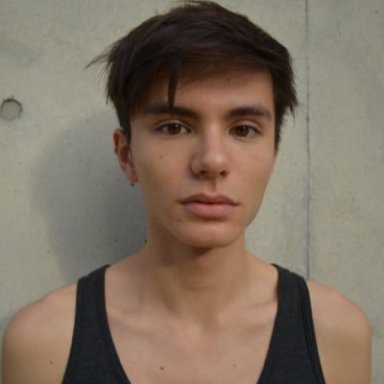 Even in the liberal metropolis of London, being the only gay guy at school was a lonely experience. Aged 15, the awkward and confused buzz of puberty had quickly manifested itself into lust and affection. Being surrounded by my mostly straight male classmates meant that, more often than not, my feelings were unwillingly directed at them. It was a time where I hoped a playful touch in passing in the corridor was a signal. I’d play these self-destructive games with guys, lulling myself into a false sense of hope. For them, it was a forbidden lust, one that masculinity told them to deny. For me, it was a waiting game where I hoped sharing the warmth of each other’s skin would escalate into something more meaningful.

I am 23 now. However, recently I’ve realized how these school experiences have a habit of worming their way into your adult life.

There’s a part of me that still feels guided into old routines of crushing on straight guys. Despite the fact that I now am in a loving relationship with somebody who I can see spending my life with, I am still trapped.

I have noticed through my interactions with masculine-projecting straight men that there is a part of me that yearns for their affection. I still want to feel a part of a club that I was denied from so many times.

For me, there is something so enticing about men who outwardly display stereotyped forms of masculinity. The ripple of muscle that carves out the shapes of their backs. Their sloping pumped up arms. A six-pack that crisscrosses across their stomach.

And it still pains me. I am fully aware that this kind of guy is not good for you, me or anyone. It is purely a fantasy that you can change him. A guy like this may represent what is considered attractive in terms of masculine ideals but he’ll never offer you what you want.

Sometimes I find myself either through friendship or fantasy still chasing the dream of changing the epitome of straightness into queer love. However, now I am conscious of it. And because of my love of the bind that unrequited straight love offers, Frank Ocean will always have an intangible grip on me.

Before Frank, I couldn’t find anyone in the public sphere whom I could identify with, someone who had felt the excruciating feelings I had felt. This all changed when I first heard Frank croon the words ‘I can never make him love me’ on ‘Bad Religion’. Finally, someone that understood the suffering that comes with unrequited homosexual love. Hearing someone directly voice the struggles that come with loving a straight guy made my feelings feel a little less forbidden.

‘Bad Religion’ specifically deals with the moment when you realize that their sexuality won’t change for you, that the moments you shared with them really were just games to them. Listening to the track over and over again made me come to terms with the fact that I was just hurting myself.

So it could be said that it is ironic that Frank Ocean also soundtracked the blossoming of my current relationship. It was around when I first met my boyfriend that Frank Ocean’s second full-length album “Blond” was released. As we got to know each other in dimly lit bars, restaurants and eventually at his place, one of Frank’s most heartfelt tracks “Self Control” was the song that I’d put my headphones on to hear every time after seeing him.

Looking back I realize that I connected to Frank’s croons about a relationship that’s time was not right. I met my boyfriend in Germany and at the time we both believed that after going home, our relationship would sadly end.

The lyrics “I know you gotta leave, leave, leave / Take down some summertime” perfectly encapsulated the feelings surrounding a summer fling that had to unfortunately end. It was a breakup song for two people who didn’t actually want the relationship to end.

And thankfully it didn’t. We made the relationship work across borders, countries, and languages. And I am thankful for that more than anything. As Frank Ocean notes in “White Ferrari”, “I care for you still / and I will forever.”

Fast forward to the present day and Frank has recently released “DHL”. Funnily enough, it is a name that my boyfriend is very familiar with. DHL is a German shipping company that ships 1.5 billion packages annually.

It is also a song that sees Frank Ocean at his most confident and is the first where he is outwardly flexing not only his career successes but also his queerness. We see him take ownership of his success, riches and most importantly his sexuality.

“Boy toy suck me like a hoover…/ boy toy ride me like a uber” he sing-raps over a steadily building beat that seems to feel as comfortable as he is in taking in its sweet time. Frank Ocean fans have not forgotten how long it took for him to release Blond.

However, it also marks the first time I’ve ever heard any public figure so outwardly boast about having queer sex. We often forget that it was not that long ago that musicians would stay in the closet for fear of the backlash that being open would cause. Queer musicians would instead describe their sexuality in whispers of double entendres and innuendos. Frankie Goes to Hollywood’s “Relax” and The Smiths’ “Handsome Devil” are key examples of this.

As “DHL” shows, those days are long over. Frank’s casualness shows that he is ready to do away with any of the shame that many queer people associate with their sexuality. Thanks in part to Frank, I finally feel like I can do the same.

British-Japanese writer and student in London.

A Reverent Apology To My Body