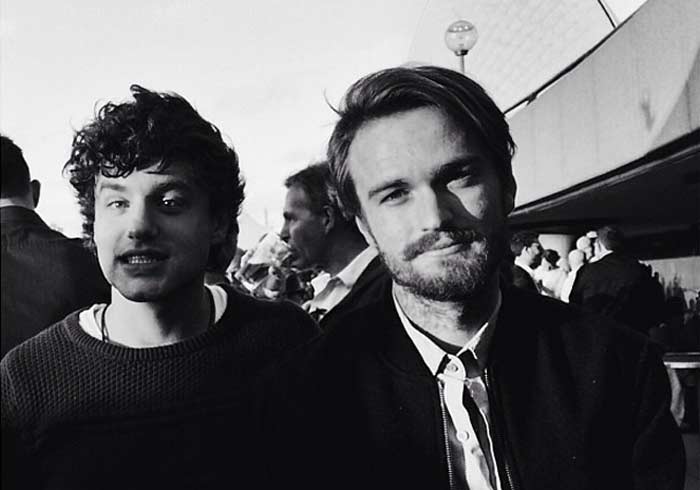 Twenty-four hours ago I started using Tinder. “Ah, shit,” you’re thinking, “another Tinder-themed think piece.” Yeah, OK, shut up. This isn’t a “How To” tutorial or a “5 Types Of Douchebag You’ll Meet On Tinder” warning piece or a deconstructive analysis about how Tinder is responsible for the death of romance. (Trust me, it isn’t responsible—nightclubs did that already.)

I am merely writing to express that some people are generally shitty at Tinder. The past twenty-four hours have proved that I am one of those people. I thought I would be good at this because most of the time I like the Internet version of me over the real me. The real me is always so tired. The Internet me is so great.

Tinder’s sleek interface and easy-to-use, anonymous programming suck you in, whispering softly in your ear, “You can be anyone…anyone…annnyyyonnne.” So I tweaked my profile becoming the Tinder Tom below: 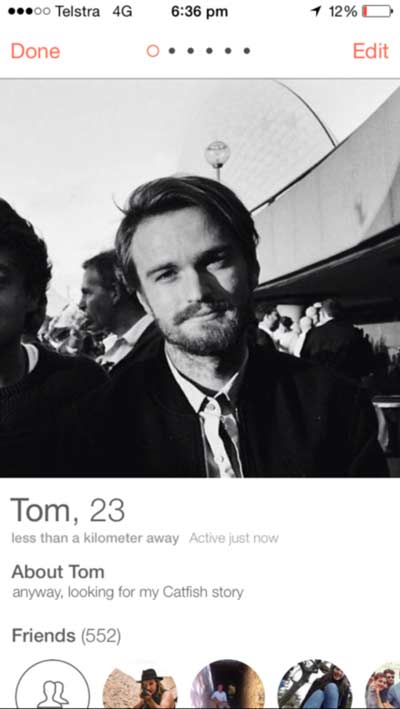 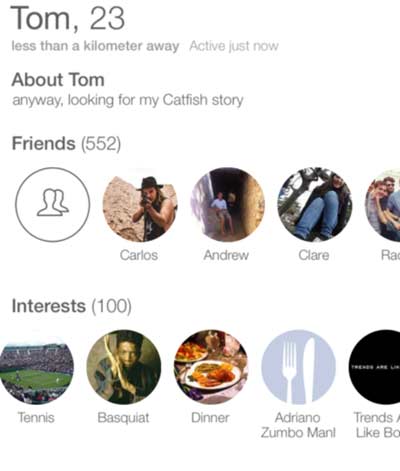 …Tom, who over-edits photos and gets adult acne… 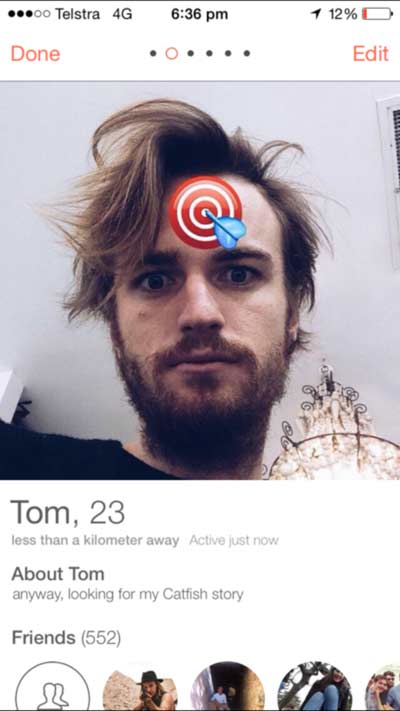 …Tom, who uses a face mask because he’s a modern man…. 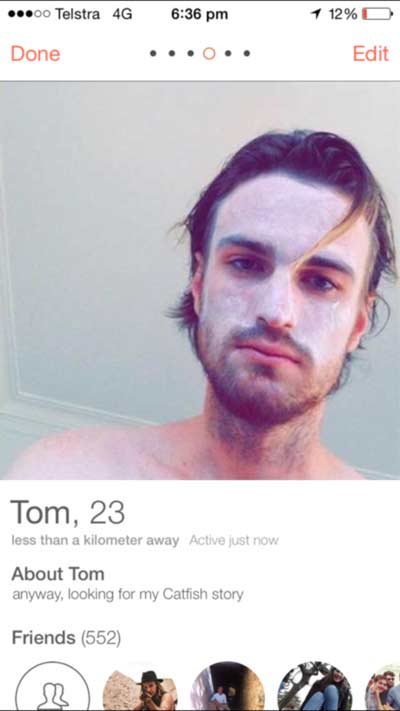 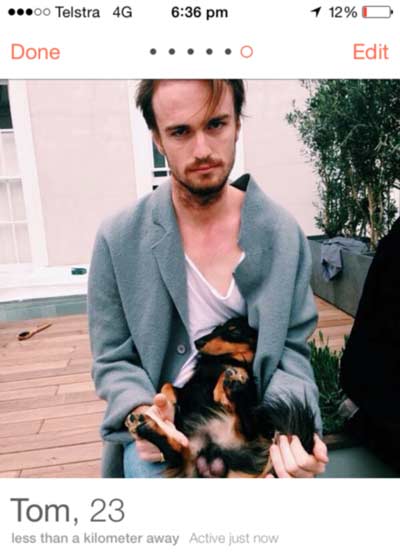 This is the Tom of Tinder. Would you date him?

With my new, slightly (overly) constructed profile, I took to the streets (of Tinder) to test how likeable I was. I swiped left a lot of times before I hit the goldmine of right swipes. It was satisfying to swipe right after swiping left for so long and the nibble of RSI that had started after the first hour of swiping was dispelled. Now I just had to wait to be right-swiped back so a conversation could begin. After twenty minutes, a full-blown identity crisis took over. No one liked me. If they didn’t like Tinder me, they definitely weren’t going to like real-life me.

Mid-existential crisis, I decided to call my Tinder Tutor, whom we shall fondly call “J” for purposes of anonymity. J has had some success in the Tinder dating-sphere. “Success” can be defined as “None of her dates have been serial killers or rapists.” I recommend a Tinder Tutor for anyone starting out in the terrifying world of online dating. J talked me down off the ledge with wise words about being patient and taking it slow. Don’t rush into it, don’t panic. It would have been great advice had I taken it. During our phone call, I received two “matches” (that means two people right-swiped me that I had already right-swiped), so I swiftly ended the conversation partly because I was sick of J’s voice and also because I wanted to talk to my new admirers. ADMIRERS. 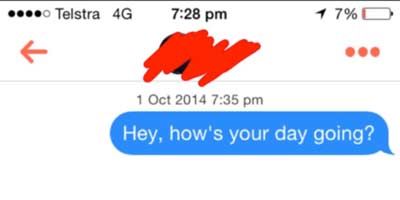 Literally no reply to this. Did I come on too strong? Should I just have said “Hey”? Maybe that’s still too warm. With that early rejection I waited a full seventeen minutes before embarking on my next attempt: 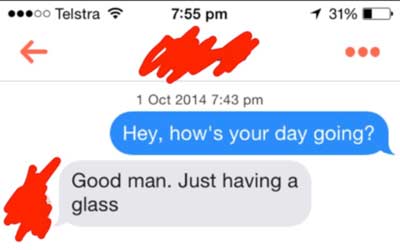 What the fuck does that mean? “Having a glass”? Were you glassed? Are you suffering from a concussion because of said glassing? Is that why you didn’t reciprocate with another question to further the conversation?

Tinder was proving to be my kind of place: a place of rejection, poor punctuation, and shallow conversation.

About a half-hour after my sincere dialogue with the glassing victim, I received another match. This guy had cool style, was slightly older, and his profile spelled “Tom’s future husband” clearly: 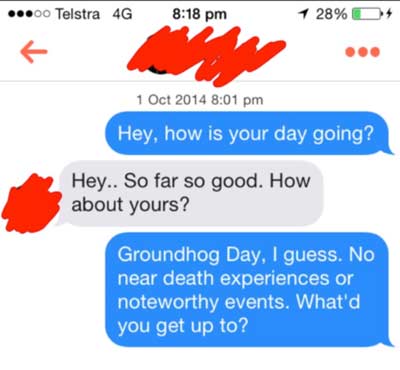 We got a bit further that time. I had a question asked about me…but then clearly I was too eager. Was it the reference to Groundhog Day that scared him away? Was it the honest humor? Or was it the attempt to continue the conversation? Was my question too intimidating for him? We will never know because he has been “radio silence” since then. Like I said, husband material.

After my hat trick of Tinder blunders, I decided to call it a night. I lasted four minutes before I was swiping again. I fell asleep swiping. There is a commonality among some Tinder users. They seem to think it’s appealing to pose while bottle-feeding barn animals, while others think gym selfies and revealing their abs spells depth of character. Finally, my all-time favorite common quality is writing “into being outdoors” in their description. That’s a cool interest. Tell me more. What about “outdoors” are you into? I wish I could show you these examples, but I’m sure I’d be breaking some privacy clause.

This morning I woke up to two new matches. Surprised, I forgot J’s advice to be patient and take it slow. I rushed in. I realized my classic starting line, “Hey, how’s your day going?” couldn’t work at 7:45AM, so I had to come up with something new and original. J suggested mentioning the weather, but that wasn’t very me. I thought something more “out there” such as “how are you” would do the trick. Attempt number four began like this: 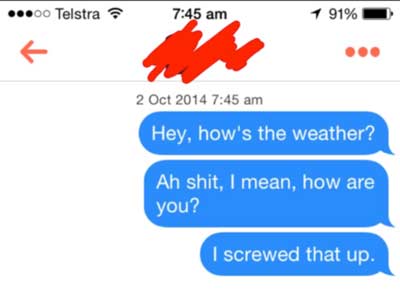 I don’t even know. I can’t tell you how it happened. It was a blur. He never replied to that one. The weather was great this morning for any keen meteorologists out there. Four for four. Maybe fifth time lucky? 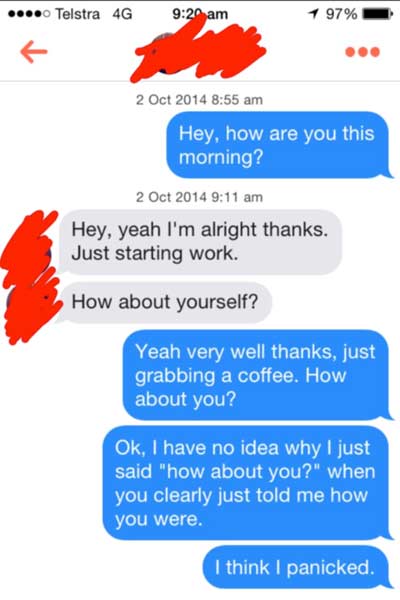 Nope. Not lucky. Did I think there was a third person in the conversation? Probably. Was I asking one of his multiple personalities how he was? Probably. Was I under-caffeinated and panicked? Definitely.

So I am writing to you to let you know that Tinder doesn’t work for some people. My first five attempts at making Tinder conversation resulted in five silent rejections and definitely deflated any ego I had going into this social experiment. For anyone doing well at Tinder, I commend you. If you stumble across my profile, don’t right-swipe me for fear of partaking in the most awkward conversation of your life. For anyone just starting out at Tinder, I get it if you don’t choose me to be your Tinder Tutor. From now on I’ll just stick to meeting future husbands the old fashioned way—at nightclubs.