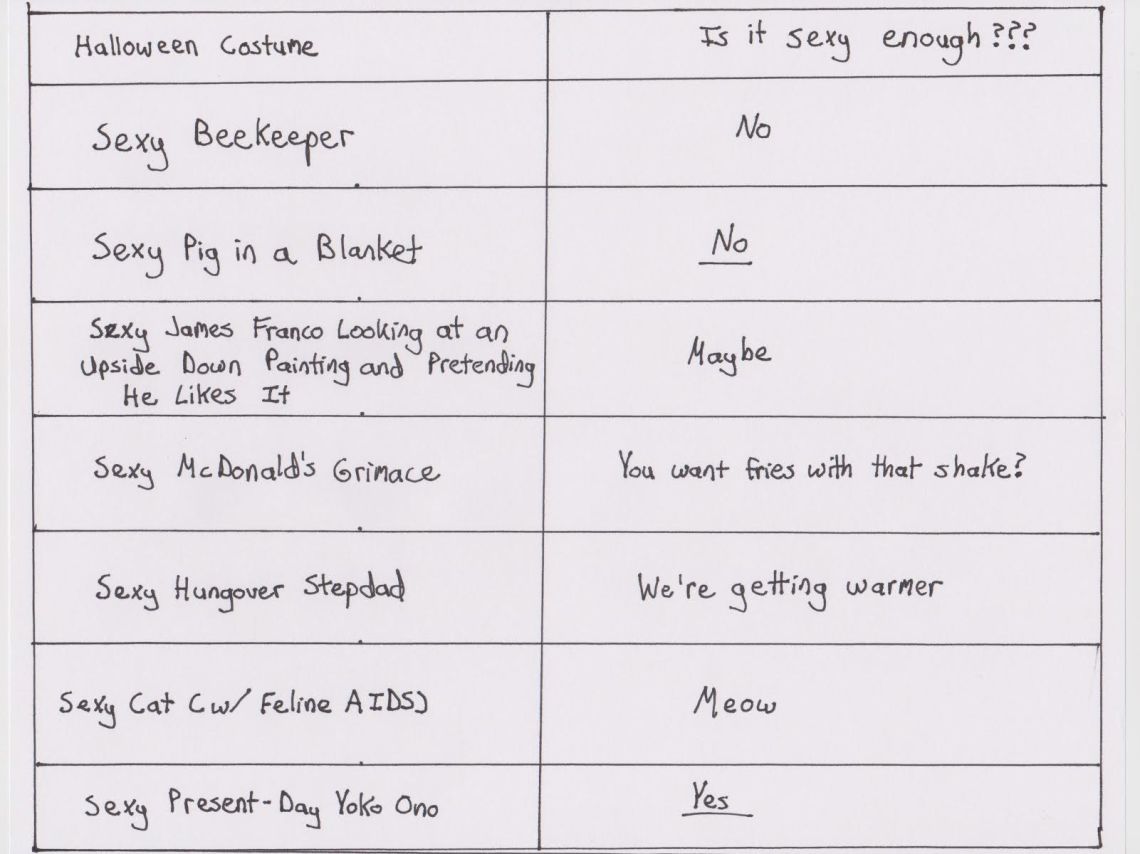 You’ve made the mistake of trying to go the funny route with your costume one too many times. “Ha ha!” you’ve thought to yourself while crafting your hilarious getup. “People will really get a kick out of this hot dog suit!”

It seems like a great idea until you go to a party and watch a bunch of extremely attractive, scantily clad people make out while you sit in the corner trying to reapply your relish.

If you want to fit in with the cool kids this year, you’ll finally have to sex up your game. You’re like the last person in America who hasn’t had a Halloween nipple slip. Hell, you’re probably the last person on Earth who hasn’t walked into a crowded Halloween party and immediately had accidental sex with half of the attendees.

I’m aware of all of the arguments against risqué Halloween costumes: I’ve heard them decried as “trashy,” “objectifying,” and “oh my god, I can actually see your uterus.” The truth is that sexy costumes are far from the most offensive found at an average Halloween party.

Far worse are those who attempt to capitalize on tragic events with an intentionally “too soon” costume that revels in its inappropriateness. Extracting humor from other people’s misery is practically a Halloween tradition, but sometimes too soon really is too soon, and the same goes for sexy costumes. That being said, let me be the first to state that 2014 is officially the first year where you can unapologetically don your Sexy Dead Titanic Passenger costume – but don’t even think about wearing that Sexy Dead Hindenburg Passenger costume, yet. Dick.

Of course, a revealing outfit often means getting into better shape to avoid embarrassment. I’ll never forget the first year I tried a sexy costume – 1992, when I was Sexy Charles Grodin. What should have been an unforgettable evening was ruined when someone brusquely pointed out that “Charles Grodin doesn’t have gout.”

Since that rather traumatic episode, I’ve typically turned October into a health-crazed month in which I forego fast food, soda, and most intravenous drugs. Last year it really paid off when my Sexy Kia Soul Hamster gave the Eastern seaboard a gigantic collective boner. The fact that my backside was covered in tufts of genuine hamster fur certainly didn’t stop onlookers from commenting on “dat ass.”

Some of you may be worried that your planned costume doesn’t lend itself well to sex appeal. “How am I going to be a Sexy Art Garfunkel?” you’re undoubtedly wondering. The truth is, you can make any Halloween costume sexy with a few minor alterations. Show a little thigh and regular ol’ Harriet Tubman becomes Sexy Harriet Tubman. And you only need to bare your midriff to turn boring Charlie Brown into Sexy Charlie Brown!

Still really stumped for ideas? Eh, just be a slut or something.

100+ Cute Nicknames for Your Boyfriend, Husband, or Partner