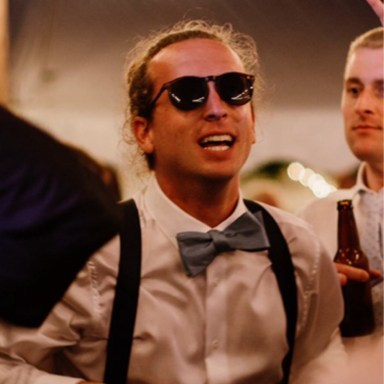 Well, it’s that time of year. Leaves have changed color, the sky has covered itself with a fluffy grey blanket, and scarves are crawling their way out of closet storage. As a Southern California resident, I can’t confirm any of that — it’s still about 70 degrees here — but I do know at least one way to get myself into the fall spirit. The cure to the blue sky blues is simple — grab your favorite blanket, crank the A/C to 50 degrees (don’t actually do that), and pop in the 1989 feel good epic, When Harry Met Sally…

Written by Nora Ephron and directed by Rob Reiner, When Harry Met Sally…is not a story about when Harry, a pre-City Slicker Billy Crystal, meets Sally, the queen of khaki’s Meg Ryan. It is a story about when Harry meets Sally and then meets her again and again — over the span of 12 years. The timeline is marked by fashion trends, Sally’s changing hair styles and Harry’s beard or lack of one. But, don’t worry, the leaves remain yellow, orange, and red. As if fate knows that love is best felt during Autumn. Being able to capture that tone throughout the film is one of the many talents Reiner displays here.

But back to the plot. Harry meets Sally through Harry’s girlfriend at the time. Harry and Sally share a car together on an 18-hour road trip to New York City. This is not a trip inspired by anything but convenience — a recipe for disaster. Harry introduces himself as a complete prick by insulting Sally before they even hit the interstate, all while spitting grape seeds out the window. (For this writer, there ain’t enough gas, grass, or ass in the entire world to tolerate that kind of behavior.) Harry tries so hard to present himself as a deep, misunderstood cynic with a dark side that it feels like a defense mechanism — can’t be rejected if you reject them first. It’s as if Harry doesn’t know who he is yet and feels that projecting his “dark side” replaces his lack of personality or goals. Harry is wearing a mask. A strategy applied by many recent college graduates worried about what life holds for them. Sally takes the opposite approach, it’s all puppies and rainbows and it’s a pity if you don’t realize that. While more pleasant to be around, this bubbly innocence is also a defense mechanism — can’t be sad if you’re happy all the time.

After Harry tells Sally she’s attractive, she takes offense, thinking it to be a come on. He insists that it wasn’t — even though we all know if she had gone with it he would have, too. She tells him that she would never be interested, as he is dating her friend, and that they would just have to be friends. Wounded and embarrassed, I assume, Harry tells her that men and women can’t be platonic friends because “the sex part always gets in the way.” Sally is optimistic and disagrees. Throughout the conversation, Harry doubles down, and asserts his belief that men and women can only really be in one relationship — the romantic kind. Pretty black and white principle coming from a man so “deep.” Obviously, once they arrive in New York City, they part ways with each other in agreement they can’t and won’t be friends. Harry out of principle and Sally out of disgust. Can’t say I blame her.

The film picks up — **Extreme Spongebob Narrator Voice** — five years later when Harry and Sally recognize each other on the same flight. Sally reluctantly catches up after Harry sits next to her on the plane. Harry is now engaged and Sally has a boyfriend. The topic of friendship comes up again and the two once again decide they can not be friends.

Sally sports a fresh hairstyle, Harry rocks a beard, and suddenly we are transported again to — **Extreme Spongebob Narrator Voice** — five years later. Less than 30 minutes in and the story advances a decade. Still plenty of film to go, but this is the timeline we remain in for the rest of the film. Third time seems to be the charm for these two and, ironically, a friendship blossoms as leaves fall around them in Central Park.

Throughout the film, elderly couples break the fourth wall to tell the story of how they met or came to be married. It’s very sweet and is a welcomed break between scenes. But what becomes obvious throughout is that all of these stories are not fairytale stories. They’re messy, fractured, and layered . Because love is messy, fractured, and layered.

Hollywood would lead you to believe people fall in love within ninety minutes — they don’t. That is what elevates this film above the rest. The film was largely inspired by Reiner’s experience with divorce and he served as the inspiration behind Harry, which I believe lends itself to the realistic nature of this film. Dialogue aside (quick, witty, prepared — it’s hilarious but people just don’t talk like this outside a Rob Reiner movie), this is a rom-com grounded in reality. No grand gestures, no secret admirers, no villainous ex — just two people meeting at the wrong times in their lives until they finally meet at the right time.

Carrie Fisher, Bruno Kirby, and Steven Ford contribute their talents on screen as well, but the spotlight here is on Ryan and Crystal. Their chemistry is electric. Harry is pretentious, Sally is unbearably neurotic, but Billy and Meg have that undeniable charm to make you root for them. They deserve each other. Not because they’re both a little exhausting but because they make each other better.

Recently, I introduced my girlfriend to a group of friends that is very important to me. Afterwards, I received a text message from one of those friends that read “Hey man, she’s really awesome. You’re different around her. She makes you a better person.” Some might read that as a backhanded compliment but it isn’t. I knew what they meant. They were saying that it’s visibly obvious that I want to be a better person for her — and myself.

When Harry met Sally the first time, he had no interest in being a better person. Stay with me here. Yes, he had met Sally, but he hadn’t met the person she would become. Same goes for Sally. Neither knew what they needed. Harry says it himself, “When you realize you want to spend the rest of your life with somebody, you want the rest of your life to start as soon as possible.” When Harry met Sally they were both lost, searching for themselves. When Harry met Sally again, both were too invested in the idea that they had it all figured out. It was the third time, after both had been humbled by failing in love despite their having “it all figured out,” that they were open enough to see what the other could offer. I’m lucky it didn’t take me 12 years and 3 months to find the person that makes me want to be better.

It could not be a better time of the year to watch When Harry Met Sally…It’s cuffing season (ask your local millennial what that means) and this will absolutely inspire you. The film exists in perpetual autumn and bleeds very nicely into Christmas and New Years. It’s not a holiday film, but the seasonal aesthetic will warm your heart all the same. Hilarious and relatable, When Harry Met Sally… is an undeniable classic that ages like a fine wine. 5 out of 5 enjoyed best with the ones you love and a Pumpkin Spice Latte.