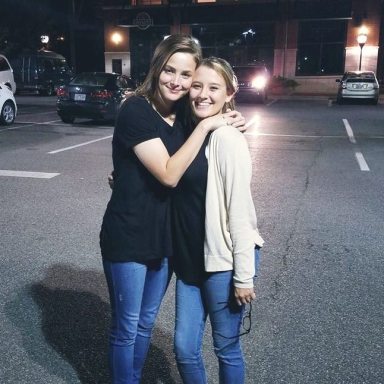 To my future daughter,

I don’t know you yet. You currently exist only in daydreams filled with tiny shoes and small hands and choosing names and moving on to a new season in life. I have no idea when you will come. I don’t know if I will give birth to you or adopt you or bring you into my home as a guest only to have you stay forever. I suspect it will be quite a few years before I meet you, but God may have different plans for us.

I’ve been thinking about you a lot. Actually, I’ve been thinking about your dad, and that has made me think about you. Last weekend at a youth conference, the speaker spoke about the fiery furnace and the bold faith of Shadrach, Meshach, and Abednego. You probably know the story. How they were told to bow down and worship the idol, and they stood instead, even when standing could mean certain painful death. I’ve heard it many times, too, but the way the speaker told it was like hearing it for the first time. He elaborated on what it must have felt and sounded like as people everywhere dropped what they were doing and bowed down.

He mentioned how maybe the three men planned this out beforehand, and maybe not, but because of their faith, none of them were surprised to look up in the crowd of bowing people and find the two others standing just the same. The speaker stopped there and told the audience that if they didn’t have friends who they knew beyond a shadow of a doubt would be standing when the world was bowing to false idols, they needed to find new friends. He told the girls that if they weren’t dating a man who would stand up in honor of God, they needed to dump him. And he told the guys that if they were dating a girl who didn’t expect him to stand, she had to go.

And this is when I started thinking about you, sweet girl. When I looked over at your dad, I knew beyond a shadow of a doubt that he is a man who will stand. You will know this, I’m sure, by the time you get old enough to read this letter. You will have experienced the way he stands strong, like an oak, his roots buried deeply in His Father. His identity is found so strongly in Christ, he doesn’t even think about standing. It’s just his automatic reaction.

He is the kind of man I want you to love.

You see, the world will be telling you many, many things about love. About who you should be with. Some of these things will appear good and sweet, but at a closer look, you will see they are superficial, misleading, and often downright ugly. I don’t know yet what our parenting rule on dating will be, or even if you will want to date (I bet your dad will not be disappointed if you feel called to the gift of singleness) but I do know this: once you get to that point, choose someone who reminds you of your dad.

Choose the man who stands. The one who grabs your hand and helps you stand when you feel like bowing. The one who humbly sits at the cross, repenting for the times he should have stood and didn’t. There were times when I chose the wrong boy. I won’t even say man because he wasn’t one. I won’t get into all the details (I’ll save that for another letter) but I will tell you this – having no man at all is better than having a man who won’t stand.

I pray that you will see the way your dad loves me and hold out for a love like that. I wish I had. I pray you will be influenced by the way he applies grace to my mistakes, pushes me gently towards a focus more centered on Christ, humbly serves me without ever expecting anything in return, has my back when I’m faced with obstacles, and prays with me and for me. It is my hope that you will see the benefit of expecting a man to not blend in with the crowd, but to stand up and stand out, bold in his faith and sure of who he serves.

I hope this makes sense when you read it. And that it doesn’t come across as condescending or belittling or patronizing. Just know that I love you, even now, when you aren’t even a thought yet, and that my prayer is and always will be that you choose a life that leads you closer to God and His calling for you. Surround yourself with people who stand, and you will find it’s easier for yourself to stand. I promise you won’t regret it.

Taylor. 20 something. Lover of cereal. Writer of words.