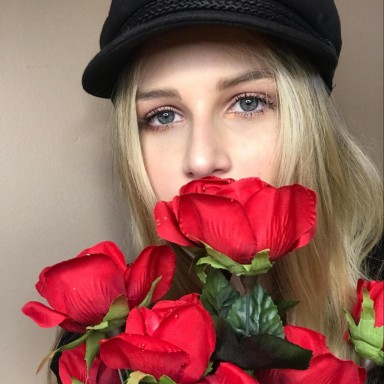 Who’s to say that nudity and self-love don’t go hand in hand? I’m sick and tired of being told people can see my nipples (about 15% of people I meet probably do – most likely because I don’t own any bras). I’m not actively showing them, but if by God’s grace they happen to make an appearance – so be it.

OF COURSE, there’s a time and place for one’s nipples to be perky and paraded about. You wouldn’t walk into work wearing a mesh shirt with nothing underneath, would you? Leave that to Lena Dunham (referring to my all-time favorite scene in Girls). Although, I must say that would be quite liberating – can you imagine the looks you would get?

When you really, truly think about it – your nipples should be the complete opposite of offensive. Why?

Women’s breasts have been sexualized. As a matter of fact, we are the only female mammals whose breasts are used for stimulation during intercourse. Now, I’m not saying women don’t want or enjoy this, BUT, I would like to point out the fact that our breasts are NOT there for another’s pleasure. First and foremost, our hooters are meant to nourish a child.

To the men who think breastfeeding is an act that should be kept private – NO UTERUS NO OPINION. While the months that newborns are breastfed are vital to their health, women should not be expected to stay in the privacy of their own homes so not to “offend” anyone. It’s not like the kid popped out of a woman’s boob at childbirth, it was her vagina. She’s not “whipping it out” to arouse those around her, she is simply feeding her child. So, what is the big deal with nipples? Why are they considered gross in public?

As a woman, I’ve definitely had my fair share of encounters with men AND women body shaming me. From security guards at music festivals to my parents’ friends – I’ve basically heard it all:

“You should consider wearing something more appropriate next time.”

“You let your daughter go out looking like that?”

And on and on it goes…

This isn’t a ‘me’ issue – it’s a human issue. A gender issue. A power issue. An issue of equality. The wage gap between men and women is still substantial, the sex trade is growing at alarming rates and women are raped while their perpetrators receive little to no punishment. Women are treated like property, which plays a huge role in the issues women and other communities face when it comes to the sexualization of our bodies.

Everyone on this planet is born with a pair of nipples, but as we grow older, there’s a set of unspoken rules about who can and cannot show them. Men get away with being topless in all sorts of places and situations, while women are essentially forbidden from showing their nipples. Yes, just the nips, not the rest of the tit. We can show underboob, side boob, top boob…all the boobs. But GOD FORBID a nipple makes an appearance – because when that happens, THEN we are sluts and begging for attention.

A close friend of mine had to deal with this when she was just a teenager:

“When I was 16, I went to the lake with a friend who had two brothers. We went tubing and afterward, I unzipped my life jacket. It had pulled my bikini top out of place so part of my nipple was showing. The mom actually screamed, then told me to cover myself. She told me it was disgusting. I didn’t realize what had happened and was super embarrassed. It made me feel so small, even though her sons and husband were bare-chested with their nipples fully exposed. It’s so bizarre and unfair that I was ‘disgusting’ for a small part of my body that was showing.”

Being a woman rocks, but it can also be completely draining. When cultures are constantly fetishizing our bodies, and telling us we are merely objects of sexual gratification, it becomes exhausting having to relentlessly defend ourselves. I think the most blatant example of this can be seen through social media. I have no direct issue with Facebook, Instagram or any other platform, but I do find it hypocritical that women are singled out for showing their nipples. You can post a photo of a man and woman topless, but the female’s nipples have to be covered up or blurred out in some way. You can put an image of a man’s nipple over the female nipple and THAT would be appropriate. I can’t decide if this is more disconcerting or comical.

Now, I’m not naïve enough to think we can get all Adam and Eve in this day and age, but wouldn’t it be nice if our nipples didn’t define us as crude and pornographic? The only way this type of thinking is going to be left behind is by accepting the fact that female nipples are not offensive – so free the nipple!

Our nipples shouldn’t offend anyone. Our nipples are BEAUTIFUL just the way they are, and we should not feel wrong for that.

I am a twenty-something woman struggling through life in Southern California…from 73 degree weather to sunset picnics, it’s a pretty rough life out here. You can find me with an elderflower martini in my left hand, and a book in my right.