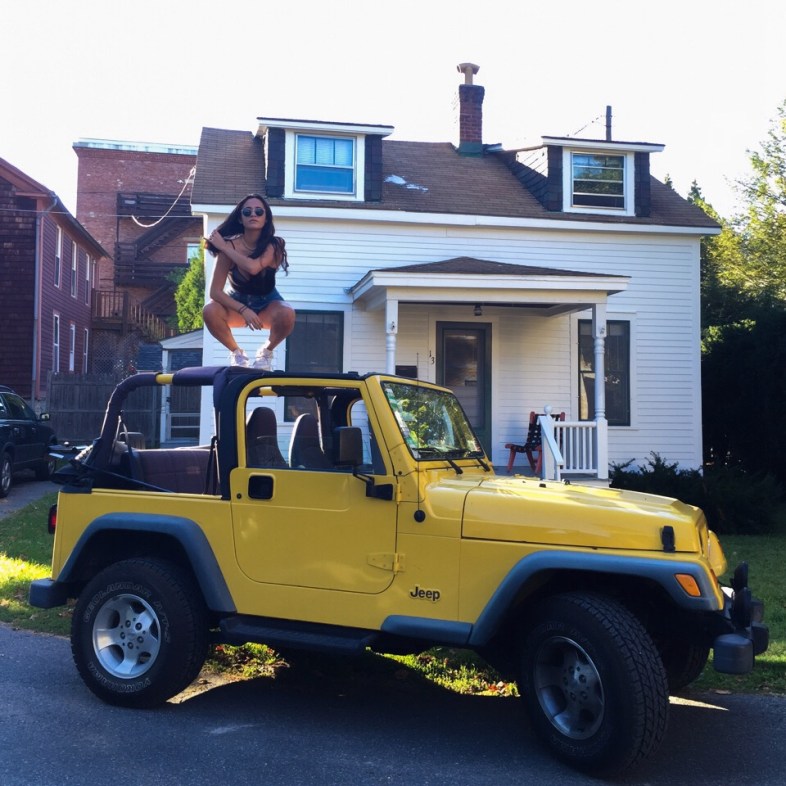 1. You prioritize getting food at the end of the night over getting laid.

Not in a contrived, “fries over guys!!!!!!!” kind of a way. In a nobody wants to sleep with me, and I’m cool with it, because I have half a burrito and bag of pretzel chips at home that taste way better than sweaty ballsack kind of way.

2. …And when you do make it out, you’re often clad in sweats.

I’m not necessarily talking like…sweats, to be clear. I’m talking a fresh pair of Adidas tiro pants or a fab Juicy track suit. But sweats nonetheless.

3. You start drinking immediately after class.

4. …And routinely wind up shitfaced solo.

You’re pretty sure you were nipples-deep in job applications when you decided to treat yourself to a glass of Pinot…and then you remembered that you’re an amateur alcoholic, so a glass turned into two bottles and a coma on your futon. Oops.

5. Such that you usually have to be woken up minutes before going out.

You were just taking a little disco nap. Relax.

6. Your “diet” consists of less vodka and more tequila.

Tequila is an upper…duh. It makes u want to dance, which is exercise. Thus, tequila is a diet.

7. You plan a Friday darty so you don’t have to go out Friday night.

…But the darty is actually just a BBQ and no one remembered to buy alcohol so you drink one PBR and go to sleep at eight.

MOVE, BITCH. GET OUT THE WAY. YA GIRL’S GOT SOME BRITNEY TO PLAY.

9. You fear you’ve developed prosopagnosia (a term you learned in Psych 101 freshman year).

You’re old and indifferent, and your brain no longer has the capacity to record new faces. Or remember old ones. You recognize no one, basically.

10. Your friends know that there’s only one good reason your door would ever be fully closed.

11. If you’re self-destructive enough to have class on Friday, you definitely pregame that shit.

12. …And you show up wearing whateeeeever you want.

The bouncers know you (you regular campus celeb, you). This may be the first year you’ve been able to provide them with real identification; still, you don’t provide it.

14. …And you’ll find any excuse to leave the bar early.

Day-old tortellini and at least three episodes of Grace and Frankie are calling your name.

15. Before you make your exit, though, you contemplate ordering…food.

If it weren’t for the sea of underclassmen clamoring to order a drink, you’d be half-way through some very plasticky chicken wings rn.

16. And if you had a drink in your hand at any point in the night, you probably smuggled it from home.

Ain’t nobody got a spare five dollars for a warm cup of piss-beer. And, well, gone are the days of eager man-boys debasing themselves to buy you a drink—you’re old news, babe (the sweats aren’t helping). Know what sweats are good for, though? Smuggling a thermos of wine onto the premises.

17. You refuse to dress up for any theme parties of the ‘CEOs & Office Hoes’ variety.

18. Alternatively, though, you’re known to show up in costume to non-costume parties.

You were just like, feeling a *Hagrid meets Inspector Clouseau* look tonight.

19. You’ve found creative ways to make the unhealthiest of meals not that terrible for you.

PUT AN EGG AND SOME SPINACH IN A BOILING PACK OF RAMEN AND VOILA YOU’RE ON A DIET BITCH.

20. You no longer bother asking your friend if you look fat in that outfit.

…You do look “fat,” babe. And you’re cool with it, because odds are, you’re delusional—you don’t look “fat,” at all. You just don’t boast the perfectly lean body of a barely pubescent 18-year-old girl anymore, and that’s really OK.

21. And you make no apologies for your “soft” work-out routine.

First of all, YOU HAVE A WORK-OUT ROUTINE? Congrats babe, for real. You look fly as hell lifting those three-pounders (post-14 minute elliptical attempt) alongside the hardos. Good for u.

22. You can’t remember the last time you wore heels on campus.

You dress for the climate nowadays. You’re not interested in hating on freshmen for trudging across campus in terrain-inappropriate heels—you were once *that girl* (power to *that girl,* btw), you’re just no longer apt to choose fashion over comfort around these parts.

23. “Shots” has exited your vocabulary.

Your acid reflux disallows them. For real this time. You’re still ~a tank,~ to be sure, but shots are simply not a vomit-free possibility anymore.

What To Do If You’re Terrible At Receiving Love

9 Signs You’re Just In Love With The Idea Of Someone, Not Who They Actually Are