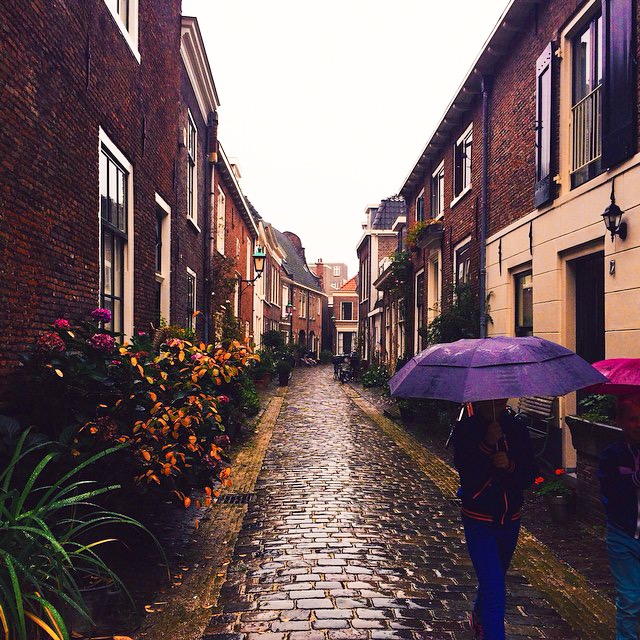 I wiped puddles from my eyes with cheap tissue as my flight took off—9 hours to figure out how I’d make next semester compare to the one I’d just spent in Europe. Leaving a place had never made me cry, but then, Amsterdam wasn’t “a place”—it was home. It was the site of my renaissance, really. When I arrived in late August, I was jaded. Bored. I thought I was bored of school. I was. But, really, I was bored of myself. I was waiting for something to happen. To fall in love with somewhere. Something. Someone. And then I did—I fell in love all over Europe. Not with a guy—that something was still missing. But I didn’t care—in four months, I’d fallen in love with at least six cities, five languages, and several hundred Dutch strangers.

It was raining as I boarded that late Thursday morning flight back to New York—Amsterdam and I were both in mourning, I think. And I was scared. Had I just lived the best moments of my life? Probably. Did I really have to leave? Yup. When would I be able to come back? Not sure. Why had I been so stupid—why didn’t choose to spend the whole year abroad? No fucking clue.

I realize I’m a “feeler.” Us water signs, baby…we’ve got some heavy emotions. But I wasn’t overblowing the sadness—the puddles weren’t theatrical. So I let them pool. Loudly. They were privileged puddles, that I know. I was blessed beyond reason to have those four months—to travel, to eat, to do…comfortably. With money I didn’t earn. Safe. Healthy. Young. But I couldn’t help it—I was devastated. If leaving hurt this bad, I couldn’t imagine how I’d bear another semester at a school I’d run away from seven months before. Three more semesters, actually (I’d forgotten all about senior year).

My mom says I’m too sensitive—too romantic. That I’m an idealist. She’s right. And in my warmest, most deluded moments of romantic idealism, I’d reminded myself of what They say—that good things come when you least expect it. Maybe, just maybe, I’d go back, and some magic would happen. School wouldn’t be any different, but maybe I’d be so different that it would feel different to me. As I hung my head against the window, watching my love disappear into the clouds, I tickled that dream—I let myself believe there was a chance I’d fall in love this semester, too.

My first night back on campus, I got violently drunk on nerves and Tito’s. Like, viiiolently drunk. I woke up at noon to some iHorror; I hadn’t been back for 24 hours, but apparently, I’d already been blacklisted from this very important senior girl’s apartment. _____  was famous for using her very broad social prowess to ostracize girls she didn’t know for doing things she didn’t like, and I was a shade proud to make the cut, but still, I thought, “Good work, Tati. Really brilliant stuff. You didn’t want to make new friends this year, anyway.”

I spent the next month—the interterm between my school’s fall and spring semesters—begrudgingly rekindling a thing that was never really a thing, at all. I didn’t like him. I didn’t want to be with him. He was rude and dull and not worth my attention—but he was available, eager, and older, so I gave it to him anyway. He was also a fucking weirdo, which I forget isn’t always a good thing.

I vowed I’d get my shit together come spring semester. There had to be other guys—guys that I actually wanted to hook up with. Guys that wouldn’t make me hide my phone so my friends didn’t give me (the bad kind of) shit when their names popped up on my screen. There had to…………right? I’m not an unattractive girl, after all. And despite what some of my internet haters seem to think, I’m actually pretty fun at parties.

Sometime towards the end of winter study, I remember him—not the weirdo, a different one—approaching me as we walked into a party.

“I hear you know how to roll joints?! That’s awesome, you’re the only girl I know who can.”

I laughed. What funny non-compliment (you—a GIRL—do this thing that most boys I know can do??! WOW, you’re COOL!)—especially since we didn’t “know” each other then. We were acquaintances at best, and if I’m keeping it really real, I don’t think I knew his name. He was walking into the party on his then-girlfriend-of-two-year’s arm, btw.

Over the next few weeks, we started to hang out. Relax—no, not by ourselves. His girlfriend was usually around, and when she wasn’t, plenty of his friends (and mine) were. I wasn’t hitting on him—I didn’t want to “steal” him (not that I assume I could’ve). He was just cool and funny and weird, and it was nice to have a boy like that around. Plus, he had cool, funny, weird friends, too. Around week three or four our friendship, he broke up that two-year relationship. Relax—no, I was not a factor in the break up (or at least, if I was, I’m unaware of it). Two weeks after that, we started hooking up. But you already know about that.

It’s funny how the most complicated shit in life can be so simple—how the proverbial They can be so right. I really wasn’t looking for it anymore—I didn’t expect to fall in love before graduation. I mean, maybe the too-sensitive, too-romantic idealist part of me hoped I would. But the hard part of me knew I wouldn’t find him here, now. Maybe I don’t give my emotions enough credit, though. Maybe what they hope for isn’t ever too far out of reach. Maybe anything they can hope for—anything they can wish for in my warmest, most deluded moments of romantic idealism—isn’t so unattainable, after all.

Cuz here I am, eight months later, very much in love. It’s not perfect. It’s not always pretty or neat or even healthy. I’m not sure it’s what I thought love would be. But it’s mine. I can name it. I own it—I own that love, because he gave it to me. And I gave it to him. And if I hadn’t come home—if hadn’t boarded that flight—I never would’ve found it. Kinda wild, when I really think about it.