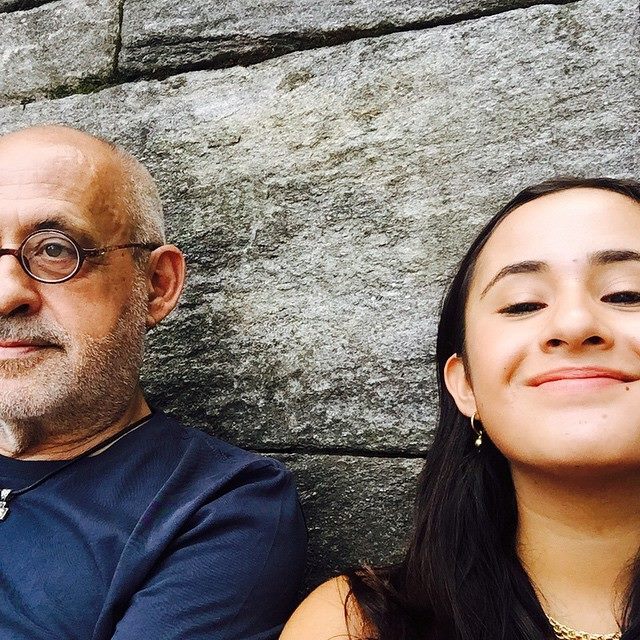 1. Growing up, your dad was always the Chill Dad. Not really because he was exceptionally lenient, but because he didn’t do the whole “You Are My Daughter, I Must Protect You By Being Strict With You In Ways I Probably Wouldn’t Be With A Boy” thing that so many of your friends’ dads pulled.

3. If you have any brothers, none of them have a major Machismo Complex. They’re gentle and “feminine” in many ways, just like your dad. Because no man is perfectly masculine and no woman is perfectly feminine, and your dad never insisted otherwise.

4. You’ve always been allowed to wear whatever you want, whether that means baggy jeans or booty shorts. Your dad never made you uncomfortable about how you dress your body.

5. And the same applies to your brother(s). He was never barred from wearing pink or having long hair; whoever he was and however he chose to express that were perfectly OK.

6. You’ve asked your dad to pick up tampons for you on many occasions. He’s never flinched.

7. …And, in a real pinch, you’ve added birth control to that order. He knows you have sex, and he’s cool with it. He’s happy to help facilitate your safety.

9. …And men respect you, because you demand nothing less.

10. You don’t seek a man who will take care of/provide for you. Your dad raised you to be independent by quietly insisting that you can do everything your male counterparts do—that you can get shit done for yourself, and above all, that you can (and should) make your own money (however you’ve gotta hustle). You don’t need a mans to survive (and thrive).

11. …And it’s important to stress that qualifier for “insisting:” quietly. In other words, he never sat you down to explicitly tell you, “you’re a girl, but that doesn’t mean you can’t do for yourself what your brother can for himself.” He just never suggested—directly or indirectly—that you couldn’t do everything ~the boys~ could.

12. He’d never pressure you to “settle down,” “find a man,” or “start a family.” He didn’t bring you into this world to control your decisions or limit you with the insistence that you’ve got to get married and make babies. He wants you to do you.

14. If you’re gay or have a gay sibling, ~coming out~ to dad wasn’t something you had to stress over. He never would’ve expected some grand announcement of your sexuality, and he never would’ve shamed you for being you.

15. Also, “gay” was never a joke in your house. If you or your brother(s) repeated some childish, homophobic shit you learned at school, your dad was always the first to cut that crap out.

16. He’s always encouraged you to put your schoolwork/career first.

17. (Not that you weren’t/aren’t allowed to date.) He wants you to find love, too, but he inspires the right priorities.

18. You were never forced to do ballet, and your brother(s) was never forced to play soccer. Your dad always encouraged y’all to stay active and engaged with extracurriculars, but you were free to pursue all your little passions, regardless whether they were “girl things” or “boy things.”

19. You don’t seek a Manly Man for a partner. All your life, your dad’s showed you that hyper-masculinity isn’t a winning trait in someone you want to date. The good guys embrace their femininity.

20. On that note, you don’t find violent displays of masculinity sexy. You don’t fantasize about two dudes throwing punches over you, for example, largely because your dad never suggested that brawling equals bravery. That’s some Freudian shit, I know, but it’s true—our dads’ behavior informs much of what we seek in a (male) partner. If he values kindness and sage passivity, you’ll look for a guy who does, too.

21. Even if she was a stay-at-home parent, your mom never “served” your dad. She’s never waited on him hand and foot, and he wouldn’t have it any other way.

23. You’ve put any boy(s) you’ve brought home at ease with the assurance that your dad won’t pull any intimidating, Show You The Gun In My Holster-type shit. If anything, it’s your mom he has to worry about.

24. Both of your parents were involved in teaching you (and your brother[s]) about your period. Your period, then, was never a gross/taboo subject. It was always embraced as a natural, healthy part of life—something that both men and women should be comfortable with.

25. In your house, displays of weakness and/or femininity were never censured. Crying, fragility, failure…none of that was tied to being “girly” (and/or considered a bad thing). Leading by example, your dad taught you that strong, capable people have human deficiencies, too. And that’s quite alright.

26. Anything your brother(s) could do, you could do, too. And vice versa. If he could use that big, scary knife, so could you. And if you could play dress-up and sing Rent into your hairbrush, so could he.

27. He never pulled any Head Of The House bullshit. The head of the table was never reserved for his laurels, and he was never automatically exempt for clean-up duty on the basis of his manhood.

28. You and your sibling(s) were always encouraged to ask questions about sex to either parent—not just the one whose sex you share.

29. He never pushed the whole “watching sports” thing on your brother(s), and never praised you for being the ~son he never had~ if, say, you always liked watching basketball. Y’all didn’t get (or lose) points for being “manly men” or “girl girls” (or anything in between).

30. You have a great relationship with him. Even if he worked a lot, your memory is stacked with precious father-daughter moments that marked your childhood. And that’s nice.