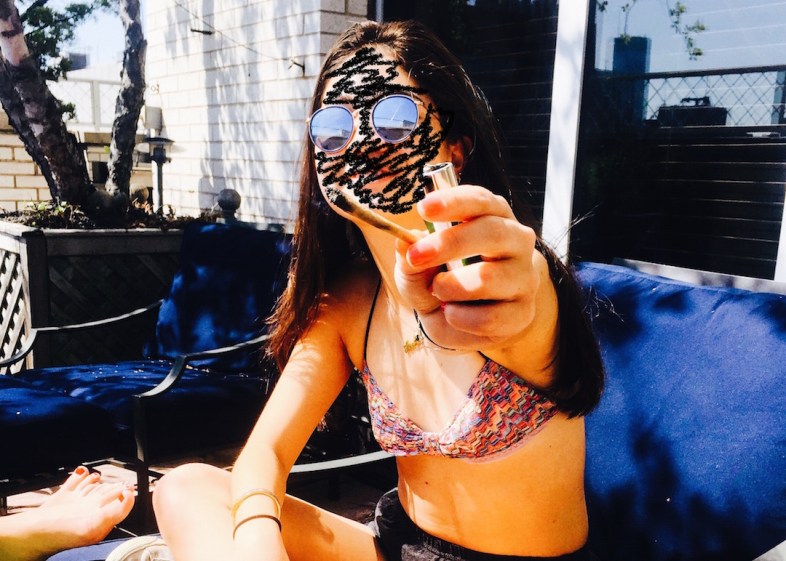 1. Smoking it was associated with Mexican immigrants.

In a super shocking turn of events, the war against weed has always been fueled by xenophobia and racism. When Mexican immigrants started crossing the border in huge numbers in the wake of the Mexican Revolution, American citizens began to hold them accountable for the country’s dilemmas du jour—particularly the proliferation of urban slums and labor unrest. Marijuana was available in the US for medical and recreational purposes looooong before **THE MEXICANS** arrived, but of course, the moment racist policy makers caught wind that the diablos were trafficking/smokin’ it, weed became stigmatized as a categorically Mexican—and therefore, dirty/poor/stupid/crazy—thing.

When Montana outlawed pot in 1927—a decade before the Marijuana Tax Act effectively criminalized the substance on a federal level—the Butte Montana Standard reported a legislator’s awesome statement: “When some beet field peon takes a few traces of this stuff…he thinks he has just been elected president of Mexico, so he starts to execute all his political enemies.” And in Texas, a senator was quoted saying that “All Mexicans are crazy, and this stuff [weed] is what makes them crazy.” Cool shit, right?!

By the time jazz arrived to Harlem, weed had been established as an essential part of *the Black music scene.* Jazz musicians like Louis Armstrong and Cab Calloway wrote about pot in their music—e.g. Calloway’s “That Funny Reefer Man”—and as a result, marijuana was demonized as a *Black thing.* When the Treasury Department established the Federal Bureau of Narcotics in 1930, Harry Anslinger, the bureau’s first director, crystallized the country’s position re: Negroes ‘n’ weed when, at an FBN conference, he was allegedly overheard saying, “Reefer makes darkies think they’re as good as white men.” Indeed, Chicanos and “darkies” were believed to be plying America’s youth with weed, so as you can imagine, that shit had TO GO.

Lol, for real. People drew their associations between weed and violent behavior based on the centuries-old stories of Marco Polo (you know, the Italian merchant whose adventures he recorded in The Travels Of Marco Polo, the book credited with introducing Europeans to Central Asia and China), who returned to Europe with the tall tale that the Hassan-i Sabbah fueled his followers with hash—a potent form of marijuana—before sending them on murder missions. I shit you not—in the 1931 New Orleans Medical and Surgical Journal, Dr. A. E. Fossier wrote, “Under the influence of hashish those fanatic would madly rush at their enemies, and ruthlessly massacre every on within their grasp.” Oh, you heard that pot makes you giggly and hungry? LOL nah, it makes u kill ppl. Duh.

According to Anslinger, “The primary reason to outlaw marijuana is its effect on the degenerate races.”

5. …And to make white women want to have sex with Black men.

Watch out, white ladies of early-20th century America!!!!! If you’re not careful, Anslinger says pot will make you want to fuck a Black dude: “There are 100,000 total marijuana smokers in the US, and most are Negroes, Hispanics, Filipinos, and entertainers. Their Satanic music, jazz, and swing, result from marijuana use. This marijuana causes white women to seek sexual relations with Negroes, entertainers, and any others.”

Newspaper tycoon William Hearst was, much like Sir Donald Trump, not a huge fan of Mexicans. After he lost 800,000 acres of timberland to Mexican Revolutionary general Pancho Villa, Hearst used his media empire as a platform to promote his horribly racist agenda. His newspapers bolstered the prominent view that Mexicans were lazy, savage, pothead degenerates—“Was it marijuana, the new Mexican drug,” a nationwide column observed, “that nerved the murderous arm of Clara Phillips when she hammered out her victim’s life in Los Angeles?…THREE-FORTHS OF THE CRIMES of violence in this country today are committed by DOPE SLAVES—that is a matter of cold report.” And you the fuck r u to question a cold report?

7. It was rumored to be more dangerous than heroin.

When asked if the “hardened narcotic user” falls back on marijuana, Anslinger retorted, “No…he would not touch that.” According to Anslinger, pot posed a greater threat than heroin (probably because heroin was popular among harmless white middle-class suburbanites and not big, scary Blacks and Chicanos). Still, marijuana was falsely lumped together with hard narcotics like heroin and cocaine, which were the main targets of early anti-drug laws. The association stuck such that, today, anti-weed legislators have flipped the script on Anslinger’s hypothesis, inaccurately vilifying pot as a “gateway drug.” But, as Miriam Boeri writes for Newsweek, the gateway theory—much like Anslinger’s outrageous suggestion—is utter bullshit. The theory entails that that weed boasts a causal mechanism that biologically sensitizes those who “use” it, increasing their likelihood to experiment with harder drugs; however, research overwhelming shows that pot-smokers are not at any inflated risk of “graduating” to more harmful substances.

…BUT LIKE SRSLY, HAVEN’T YOU HEARD?! A WHITE HEROIN ADDICT IS WAAAAAY LESS PROBLEMATIC THAN A BLACK/LATINO/FILIPINO *WEED SMOKER.*

14 Dope Reasons You Should Definitely Date A Stoner Chick

Weed Bucket List: 5 Best Places To Light It Up In America