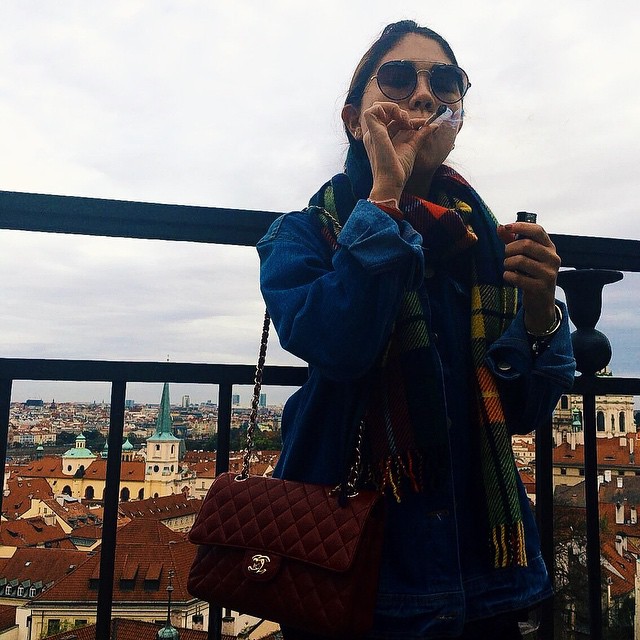 1. She’ll roll a joint waaay better than you.

Once you get over her superior rolling abilities/your bruised ego, you’ll be hella grateful you have a girl on your team who rolls a j with the agility of a fucking origami master. Women are conditioned to pay more attention to detail than men—no more loose, shoddy joints for u, buddy! And when she’s “coming over to chill,” ualreadykno she’ll arrive wielding several blunts. You’re welcome.

3. And even though she definitely eats all that pizza, she’ll *keep it tight.*

A study published in The American Journal Of Medicine in 2013 concluded, against all munchie odds, that not only are bud-smokers actually thinner than their non-bud-smoking counterparts—their bodies also produce healthier responses to sugar. The study surveyed 4,500 American adults—about 2,000 of whom had never smoked weed, another 2,000 who’d smoked in the past, and 579 who were active smokers. Basically, the researchers found that those who currently *used marijuana* boasted a lower body mass index and lower levels of fasting insulin AND were less prone to obesity and diabetes than those who didn’t. In laymen’s speak: on average, stoners have smaller waists and healthier bodies than non-potheads. Whaddayaknow.

It’s simple, really: bud makes your whole body feel better, so sex will feel better, too…like, significantly so. One study showed that weed has serious sex appeal, indeed: 75% of men reported that it significantly increased their sexual pleasure, 68% reported that it enhanced their orgasm, and…wait for it…39% found that it made them *last* longer! Another study showed that women experience even greater pot sexess—a whopping 90% of women said it increased their sexual satisfaction, and almost half reported that it heightened their orgasm (so you don’t have to, LOL!).

Not in a *doesn’t get mad at your for all the stupid shit you do* kind of way…in a genuinely less anxious/neurotic, happier kind of way. According to researches at Harvard Medical School, weed-smokers may experience reduced anxiety in the longterm, since the “drug” often acts as a sedative, helping to calm people down (and these effects can be lasting).

Your girl will boast a stoner’s generosity—she’s got good weed etiquette like any decent stoner does, meaning she’s happy to smoke people out and spread the love. Her weederosity, no doubt, will go beyond passing the blunt. You’re a lucky man.

6. She’ll get along with your friends.

Weed brings people together, man. Stoners are categorically friendlier and more outgoing than most—and if her personality isn’t enough to win ur bois over, surely a little tree and a bong will.

Fuck what ya heard about stoners being lazy and stupid—those stereotypes are bullshit and based on crap statistics that don’t control for the generally lower education levels of pot-smokers (as well as their tendency to be male…lol, sorry boys, you’re dragging us down—you just straight up perform worse on tests of verbal intelligence and quantitative skills than we do, which is why any study of the long-term cognitive effects of marijuana that doesn’t account for that confounding factor is utter trash). In reality, people who smoke weed are no “dumber” than those who don’t; in fact, according to Psychology Today, marijuana may actually help improve “verbal fluency”—the ease which which you access different words. Smart girls who smoke weed are intimidating, I know, but if you can handle the heat, I’d stay in the Fritos-filled kitchen.

Weed releases dopamine in the brain, effectively tearing down your creative insecurities and enhancing your proclivity to perceive things in different, cool ways. As a result, your girl will be a well of dope ideas, and studies show that—if she maintains her stoner ways—her ability to generate *high thoughts* will translate into a longterm capacity to perform better on tests/tasks that require her to come up with new ideas.

9. She’ll laugh at your jokes.

Because weed makes them funny. No offense.

…Cuz don’t no weird dealer *do* Venmo. She’s always got cash for grass, and that shit’s convenient.

Weed > whiskey, no two ways about it. Marijuana is simply safer and less physically damaging than alcohol, which can kill a bitch in minutes if she starts binging. And, in fact, studies show that alcoholics and other drug addicts are likely to experience sobriety success when they substitute their pills ‘n’ liquor for a much more benign, much less addictive “substance:” gange. In short, if you’re girl’s busy smokin,’ she’ll be less likely to get carried away drinkin,’ and that’s a good thing.

Weed helps her sleep soundly so you can, too.

13. She won’t take herself too seriously.

So you don’t have to, either.

She just will. You’ll see.

5 Reasons You Should Absolutely Date A Cougar