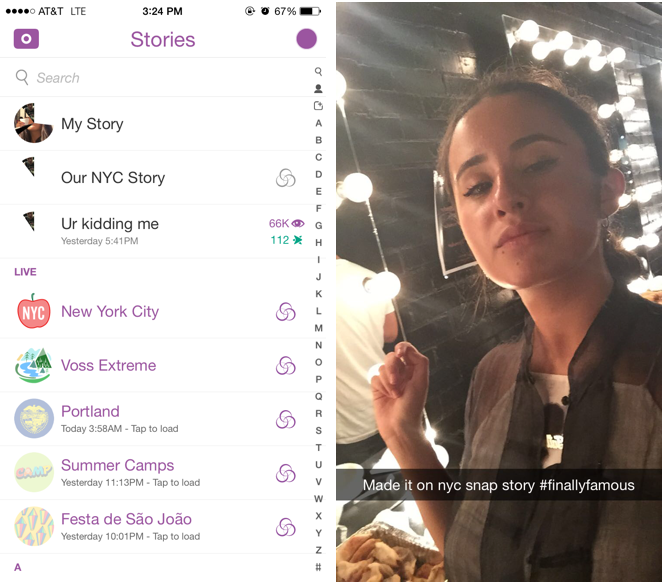 Last night, I was riding the 6 on my way home from work when—at exactly 5:41 p.m.—a particularly shameless fellow commuter grabbed a large cat out of his backpack and proceeded to make a bed for it across two Subway seats. Since I have no concept of/respect for privacy, I obviously immediately opened Snapchat to post a video of this singular #newyorkmoment to my My Story and, per usual, Our NYC Story: “Ur kidding me,” I captioned it.

So like, full disclosure, I’m straight up addicted to Snapchat. If you’re one of those people who just doesn’t *get* Snapchat, then, well, you just don’t get *it.*

If, on the other hand, you do *get it,* you get that Snapchat is the ultimate social media tool for the ultimate Millennial narcissist (me). It’s greatest feature? The Story.

As 200ish of my closest friends know, my My Story is always active. Like…always. Because, ya, I think people give a shit about everything I’m doing for the next 24 hours. Everything. All. Fucking. Day. Long. What I’m eating, drinking, seeing, smoking…everything. I want those 200ish people to see me, you know? To see that I’m alive and doing cool/funny/random/weird shit. And I want to see what they’re doing, too, even if it’s way less cool or funny or random or weird because can’t nobody do it like a Snapchat Queen can.

As you can imagine, my (also arguably addicted) best friends and I have been aggressively trying to get our snaps on the NYC Story (if you’re still reading, I’m guessing you’re familiar with this feature of the app, but just in case: Our NYC Story is a live feed anyone in the five boroughs can post to) for months. We’ve grown hopelessly bitter—who the fuck is responsible for choosing only the most horribly touristy, cliché, NOT-New York Snapchats to capture the City? I mean, really…we’re funny as shit and our *ART* belongs on that feed. Let’s get it together, Snapchat employees. What r u doing.

Back to last night and the man with the cat.

I post the video, get home, and proceed to shower and change for an amazing event my friend invited me to—a release party in a hair salon (amazing) for soon-to-be German pop star Alec Sander’s single, “Sander” (amazing), featuring Amanda fucking Lepore (amazing). I’m already having an incredible night when the following texts hit the group chat:

That’s right, bitches of New York. Until exactly 5:41 p.m. tonight, June 24, 2015, you can consume my art, which has been picked up for exclusive 24-hour distribution by the most important app on your phone.

66K views and 112 screenshots (and counting) later, thanks to Snapchat and a man with a cat, I’m #finallyfamous.

41 Hilarious Ways To Mess With Your Coworkers’ Heads