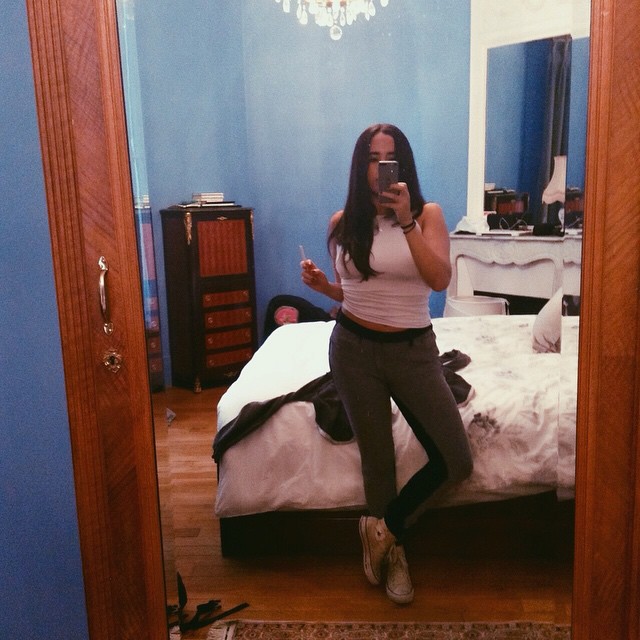 And I don’t need (or want) a ring on my finger or a husband in my bed to make be feel valuable or whole. Because I’m a woman, and I have no one but me.

2. Because only I decide when a man can kiss me.

“You may now kiss the bride,” the minister man will tell my husband. Oh, MAY he? MAY HE KISS THE BRIDE? Thanks for giving him the go-ahead, sir. I didn’t realize anybody had the authority to decide when I may or may not be kissed but me. Good to know.

3. Because I’m not a thing to be given away.

Sorry, dad. I love you…but as I’m sure you already know, I’m not the type of girl who fantasizes about you “giving me away” to my soon-to-be husband at the end of that long aisle. I’m not a thing. I’m not an object. I’m not a prize. You can’t buy me or sell me. You can’t trade me. You can’t give my body away to anyone.

Allegedly, the white wedding dress was first sported by Queen Victoria, who wore one at her wedding to Prince Albert in 1840—this fashion, then, was popularized by etiquette books that hailed it as a status symbol with an obvious connotation of innocence and sexual purity. Since I am not, in fact, a virgin, I’m not interested in this dumb symbol. Saaarry.

Fewer and fewer young women are opting to take their husbands’ names in marriage, which is great (progress)…but it’s 20-fucking-15, and still, two-thirds of all married 20-somethings are choosing to participate in this incredibly antiquated, acutely oppressive tradition. I reeeally don’t give a shit about offending anyone here; my mom—whom I love and respect deeply—took my dad’s name, and I’m sure at least a small handful of my friends will do the same. But, alas, this ridiculous convention is steeped in misogyny and inequality; when you take your man’s last name, you are implicating yourself in a long-standing tradition of women entering marriage as property—of giving your body and your possessions to your husband, whose name will be honored by your kids and grandkids while yours—worthless woman—will be erased. Ya, not into it.

6. Because I believe every relationship is an experiment.

I believe in love. I believe in long-term (maybe even life-long, if one shakes out like that) relationships. I want to have a partner who’s committed to me and to whom I’m committed—with whom I want to have kids and maybe even a dog. I’m not anti-relationship (or anti-monogamy) at all—in fact, at the ripe, sexually liberal age of almost-21, I recently entered my first *real* relationship (whoa). But I believe that every relationship is an experiment—I believe we all walk in and out of love, and so, I believe that to legally bind yourself to someone under the (false) promise that you’re DEFINITELY going to be faithful is truly a strange exercise. It’s just silly (according to the Internet, btw, somewhere around 60% of married Americans engage in infidelity…which means it’s closer to 80% since not all cheaters are exactly down to self-incriminate).

As Dean Spade and Craig Willse write in their brilliant essay, “Marriage Will Never Set Us Free,” “Civil marriage is a tool of social control used by governments to regulate sexuality and family formation by establishing a favored form and rewarding it. While marriage is being rewarded, other ways of organizing family, relationships and sexual behavior do not receive these benefits and are stigmatized and criminalized. In short, people are punished or rewarded based on whether or not they marry.” I’m not interested in the status of respectability that getting married would give me. I’m not interested in pretending like I’m not a woman of color—like I’m not woman of immigrant parents whose people are systematically excluded and controlled by the state, largely through the valorization of marriage. I’m not interested in getting married because “that’s just what people do.” Fuck tradition. Fuck inequality. Fuck marriage.

Finally, yes, I realize these marriage/wedding conventions are no longer required. I realize I don’t have to take my husband’s name or wear a white dress. I realize I don’t have to have a wedding, at all. “So like, stfu Tati…if you don’t want to do any of this shit, don’t.” But yeah, no…I won’t shut the fuck up. The fact is that your girl is not down to participate in an institution that still very much urges—through time-honored symbolism—men to own women. Because, bitch, I own me.

Now, toss the ring and get on your knees.

Would It Scare You If I Said That I Can Imagine My Life With You?

I’m Not ‘Sweating For The Wedding,’ I’m Just A Bride-To-Be Who Exercises