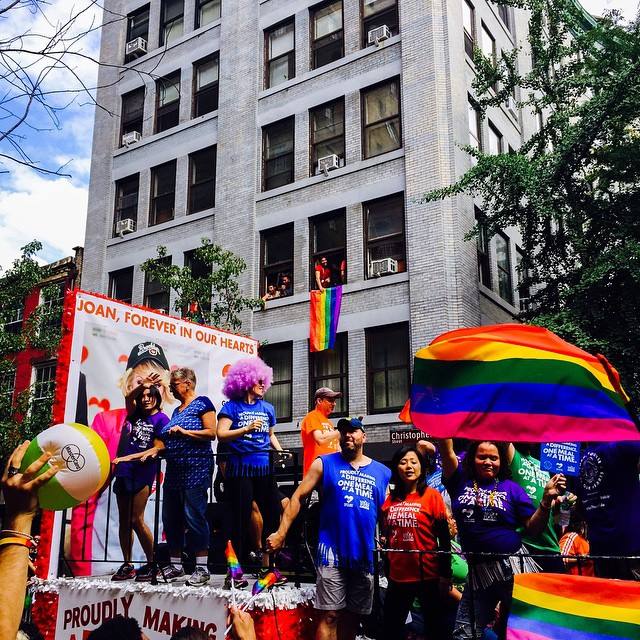 On Friday, the Supreme Court finally ruled that, whaddayaknow, the Constitution protects the right to same-sex marriage. This historic endorsement of humanity was celebrated on Sunday in New York City, where elated Pride marchers and onlookers chanted:

—What do we want?
—Marriage equality!
—When did we get it?
—FRIDAY!

I watched the parade from a rooftop on Christopher Street in the West Village—where a thick sea of rainbow flooded the concrete, making it virtually impossible to move between noon and 6 p.m.—overjoyed by the legendary ruling that made this year’s Pride that much prouder. As I waved my technicolor flag in the air, though, my heart got heavy—“It’s so not over,” I thought, “I really hope people realize it’s so far from over.”

I’m not a gay rights activist or a gay icon (yet), and I don’t want to overstate my authority on LGBT issues. But if I learned anything from “Before We Were Queer”—a fantastic women’s, gender, and sexuality studies senior seminar I took this spring—it’s that marriage equality was/is not the most pressing issue the LBQT community faces. In fact, many queer activists and scholars have vehemently arraigned same-sex marriage advocacy over the years—in their essay “Marriage Will Never Set Us Free,” for example, Dean Spade and Craig Willse write, “Same-sex marriage advocacy has accomplished an amazing feat–it has made being anti-homophobic synonymous with being pro-marriage. It has drowned out centuries of critical thinking and activism against the racialized, colonial, and patriarchal processes of state regulation of family and gender through marriage.” Spade and Willse’s critique evolves from the idea that—rather than concentrating on the matrimony of same-sex couples with enough access to marry—we should be focusing our civil attention on the members of the LBGT community susceptible to the cruelest exhibits of homophobia and transphobia, like, say, the nation’s huge population of homeless gay and trans* youth.

I’m thrilled by Friday’s Supreme Court injunction. While I vibe almost wholeheartedly with Spade and Willse—and while, as a function of my own values which echo their core arguments, I never intend to marry—I think it’s good that #love(finally)wins. But I know now that marriage equality is not the most important item on the LGBT activist agenda. Indeed, the fight for LGBT rights is far from over. Why?

1. Queer And Trans* Youth Are Homeless.

Almost half—around 40%—of homeless youth identify as LGBT, a particularly shocking statistic when you remember that only about 5 to 7% of the nation’s youth identify as LGBT. Of those homeless LGBT youth, 68% were rejected by their families because of their sexual orientation or gender identification, and 54% were emotionally, physically, or sexually abused by a family member. The disproportionate criminalization of gay and trans* youth is directly related to the issue of homelessness. LGBT youth entering the juvenile justice system are more than twice as likely as their straight counterparts to have experienced family conflict, abuse, and homelessness—300,000 gay and trans* youth are arrested and/or detained yearly, and while, again, they comprise only 5 to 7% of the nation’s overall youth population, they comprise 13 to 15% of the juvenile justice system.

2. All Forms Of Oppression Are Interwoven; LGBT People Of Color Face Further Hate.

Consider that more than 60% of those unfairly criminalized LGBT youth are Black or Latino—unsurprisingly, gay and trans* youth of color are significantly more vulnerable to injustice than their white counterparts. Now, consider that LGBT people of color are almost twice as likely to experience physical violence compared to white LGBT survivors and victims. Finally, consider that, in 2012, a rattling 73.1% of all anti-LGBT hate violence homicides targeted people of color. Gay/*trans + POC = …you do the math.

3. Federal Law Does Not Protect LGBT People Against Housing Discrimination.

…And neither does the majority of our 50 states. Believe it or not, sexual orientation is not one of the “protected classes” included in the Fair Housing Act (Title VIII of the landmark Civil Rights Act of 1968), meaning that no federal law proscribes refusing to sell/rent to negotiate with home buyers based on their LBGT status. As a result, sellers/renters nationwide are at liberty to discriminate based on sexual orientation and gender orientation—and even in many of states that bar this kind of prejudice, these antidiscrimination laws are far from well-enforced (the punishment for violating a city ordinance is, often, no more serious than a traffic violation).

In a similar vein, LGBT people experience significant workplace discrimination, largely because our country doesn’t have the proper state and federal antidiscrimination laws in place to punish employers for refusing to hire and/or firing employees based on their sexual orientation. As a result of employment discrimination, homelessness, and lack of health insurance (LGBT adults, unsurprisingly, are not “covered” as sweepingly as straight adults), queer and trans* people are particularly vulnerable to economic inequality. Lesbians couples in particular are far more susceptible to poverty than heterosexual couples—9.4% of lesbian families live under the poverty line, compared to 6.7% of straight families. And the children of these households? They’re twice as likely to live in poverty as their friends with heterosexual parents. Lesbian senior citizens don’t have it too easy, either—they’re also twice as likely to be poor as compared to straight, married couples. As you can imagine, these statistics only inflate for LGBT people of color.

Chew on this: 41% of trans* people report having attempted suicide—that’s compared to 1.6% of the general population. Maybe that’s because so many live in extreme poverty—they’re four times as likely as the general population to have a yearly household income of under $10,000. Or maybe that’s because most trans* people—78%—were harassed by teachers and students during their K-12 years by reason of their gender identity. Or maybe that’s because a heart-breaking 50% of trans* people have been raped or sexually assaulted by a romantic partner. Whatever the case, trans* people are denied their humanity largely through lack of visibility—through lack of inclusion in the battle for LBGT rights. We won’t have equality—we won’t really be able to wave our technicolor flags in the air—before the T is fully welcomed into the LGBT rainbow fold.

5 Simple, Everyday Rituals That Will Help Your Relationship Thrive